HomeHistory10 Amazing Ancient Technologies That Proved Our Ancestors Were Way Ahead of...
HistoryWorld 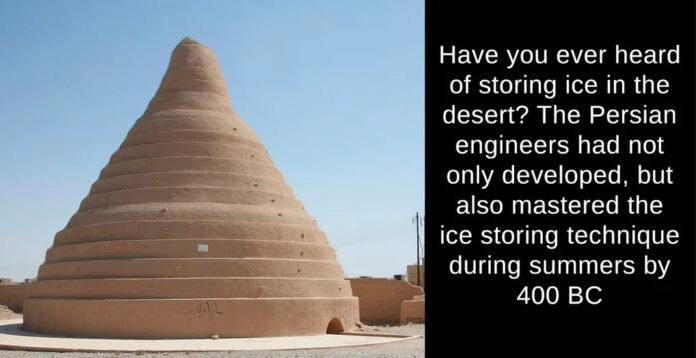 You have no idea what our ancestors did in the past if you live in an imaginary world where you are all smug about the internet advancements and robotic developments that humans have made in the modern day. We may have learned about them from books or seen them in movies, TV shows, or TV series, but what we don’t know is that they were far more advanced than we imagined. Ancient periods may not have had many people, but they were smart.

Several discoveries were made in the past about several things the ancients invented, designed, and created, but they don’t stop surprising us. The more we discover about the inventions they made, the more amazed we become, because they did not even have half of the technological developments we have today. There’s nothing here that won’t amaze you, from special refrigerators that keep ice chilled in the hottest summers in the deserts to gorgeous cups with color-changing properties.

Check out the top 10 old technologies that will make you scratch your head in the list below:

1) Have you heard of ice being stored in the desert? By 400 BC, Persian engineers had not only developed, but also mastered the technology of storing ice during the summer:

Are you all smug about the refrigerators in your kitchens? Do you have any idea how the Persians stored ice and kept it from melting during their hot summers? During the winter, the Persians collected ice from nearby mountains. They then stored them in the desert pits they had created. These pits were known as “Yakhchal” and were the first freezers. They kept not only ice in these pits, but also food, which remained cool and healthy all summer long. The structure may appear to be a large dome made of mud bricks, but it was not as simple as it appears, especially at the time.

Windcatchers were installed in the underground space of this 500 cubic meter pit to keep the temperature cool during the summer.

2) The ‘Archimedes Screw,’ a hand-operated mechanism, was created in such a way that it could move up the water using gravity. It generates energy by pushing the water down if it is reversed:

Previously, this screw was only used for irrigation. This machine was just a screw with a hollow pipe inside of it. Earlier, when it was used, it was operated by hand. After a few years, wind energy was used to operate the same way. The same technology is still in use today. It is nowadays, however, operated with a motor. Just when the shaft rotates due to the motor, the device’s end goes up, capturing the motor. The same water is then pumped via the rotating helcoid to the screw top (a spiral arrangement). This process was repeated until the water came from the top. (source)

3) This ancient masonry technique created in Mexico allows you to build vaults and root-type domes with just a trowel; no formwork or ceiling mounts are required:

Have you heard of Tequisquiapan? It is located in the state of Queretaro Arteaga, which is one of Mexico’s 32 federal entities. There is a group of masons known as the Bovederos who have a superpower. Trowels, which are small tools used for digging or applying concrete material to bricks, can be used to build vaults or dome roofs. You may think that it is quite an easy thing to do when you watch the video, but it is untrue. They use a specific methodology, and only they know how to properly use this tool. Others who have tried to enter this field have failed to achieve the same level of success as these masons. Their work is highly impressive as you keep looking at the finishing of their remarkable movements and technique. (source)

4) The ancient Egyptians built the ramp to make their construction process easier and more efficient:

Many people are fascinated with Egypt and its culture, as well as its history. However, there are some undiscovered facts regarding this place, which we are about to reveal to you right now. The Egyptians have long been appreciated for their magnificent architectural monuments, such as pyramids. Even though they didn’t have the proper tools to check the measurements of their architecture, they did their part really well. Ramps were invented by the ancient Egyptians to carry all of the heavy materials required to finish the structure in their minds. Because people can easily transport heavy materials on ramps, it would have been impossible to build the structures they did without proper ramps to lift and carry the materials. They didn’t have to raise the materials vertically; this seemed impossible during those times, especially when you look at their construction.

5) Did you know there is a computer that is 2,000 years old? Yes, the ‘Antikythera Mechanism’ is the oldest form of computer invented by the Greeks; it was designed to calculate the planetary position as well as the position of stars in the sky based on the monthly calendar:

Divers spotted something on a shipwreck off the coast of a Greek island a hundred and sixteen years ago. They discovered something odd when inspecting the site. It was made of bronze. They had no idea that this tiny discovery would lead to a significant breakthrough in our understanding of our ancestors’ history. The structure had a number of brass gear series. There were dials mounted on what looked like a mantel clock. Two dozen gears were stacked on top of one another. The calibration was perfect! Later, archaeologists discovered that it was an analog clock from the past, or possibly a calculating device. Derek J. Solla Price disclosed in 1959 that the device was definitely used to learn about the precise location of stars and planets in the Universe. He described the device as an outstanding astronomical clock or, in modern terms, an analog computer.

6) Check out this 1600-year-old Roman chalice known as “The Lycurgus Cup”; it shows that artisans in Rome mastered nanotechnology long before we did; they knew how to impregnate the glass with tiny silver and gold particles as tiny as 50 nanometers in diameter:

The Romans have been known for their gods, goddesses, and deities, as well as their mysteries, but there was something else they were famous for — the red-green cup! The most amazing feature of this cup is that it glows red when lighted from behind! And you thought we were the first to create those cups that display your photographs when you pour warm water or a beverage into them? Think again! Even if their materials were different, you get the same feeling. According to scientists, the Romans may have been the first to discover the multicolored potential of nanoparticles by accident. They later perfected it. When the Lycurgus cup was brought to the British Museum in the 1950s, scientists were confused for a long time. Until 1990, the thing seemed mysterious. When the broken cup fragments were observed under the microscope, it was found that the glass contained silver and gold particles that had been ground to be as tiny as 50 nanometers in diameter. This is less than one thousandth the size of a salt grain.

7) Have you ever heard of Heron of Alexandria? He was the first to create a robot capable of entertaining a theater audience! This beauty could not only move on its own, but it could also change directions! He was the one who invented the vending machine, windwheel and syringe, along with other geniuses like him:

If you haven’t heard of the ancient “Tony Stark,” The Iron Man, you should. His masterpieces captivated not only those living at the time, but also those living today. One of his creations was this windwheel-powered organ. It has been called the “World’s First Robot” because of its various mechanical mechanisms. It could not only play for around 10 minutes on its own, but it could also change directions on its own. To learn more, watch the video!

8) Stand here in the Hal Saflieni Hypogeum, built by Maltese and Gozo workers; it has acoustic properties that amplify voices by using certain frequencies that resonate so powerfully that you can literally feel them passing through your body:

How much do you love acoustic voices? Here’s something that will compel you to visit the island of Malta. There is an extra-special chamber made of solid limestone hidden among all the corridors and chambers. Something makes your entire body vibrate when you stand in this chamber and talk or even sing! According to the author of Malta and its Recently Discovered Prehistoric Temples, such chambers were built so that oracles could have deep impressions on people when they spoke through them.

9) If you think present-day concrete is better, you should look at this 2000-year-old Roman concrete, which is not only stronger and better, but also more durable and environmentally friendly:

Does the architecture of today’s era fascinate you? If you say yes, you have not heard or seen the ancient Romans use concrete. We are here to tell you the same. If you want to know about the durability of ancient Roman concrete structures, you should realize that it is all down to the cement. Consider the cement structures we build today; after a few years, they start to weaken. However, even if the harbor structures are washed away by the water, nothing happens to them.

Their cement has some surprising long-lasting properties. It is made up of silica sand, clay, chalk, limestone, and other elements that were melted together at extremely high temperatures.

10) This is Damascus Steel, which was used to make blades (and is still used because of its toughness); it can pass through a rifle barrel as well as the hair that falls over the blade; it is known for its’ resistance to shattering’ property:

Check out this amazing Damascus steel, which is said to be legendary! Warriors have used it in the past. Let us not forget to mention the Crusaders. Despite being used in a variety of battles, the swords constructed of this alloy kept their edges sharp enough to cut through a falling hair. They may be identified by the watery patterns on their blades known as “Damask.” The good thing is that we have decoded and recreated this ancient technology.