HomeNature10 Places To Visit Before They Vanish Forever
Nature

10 Places To Visit Before They Vanish Forever 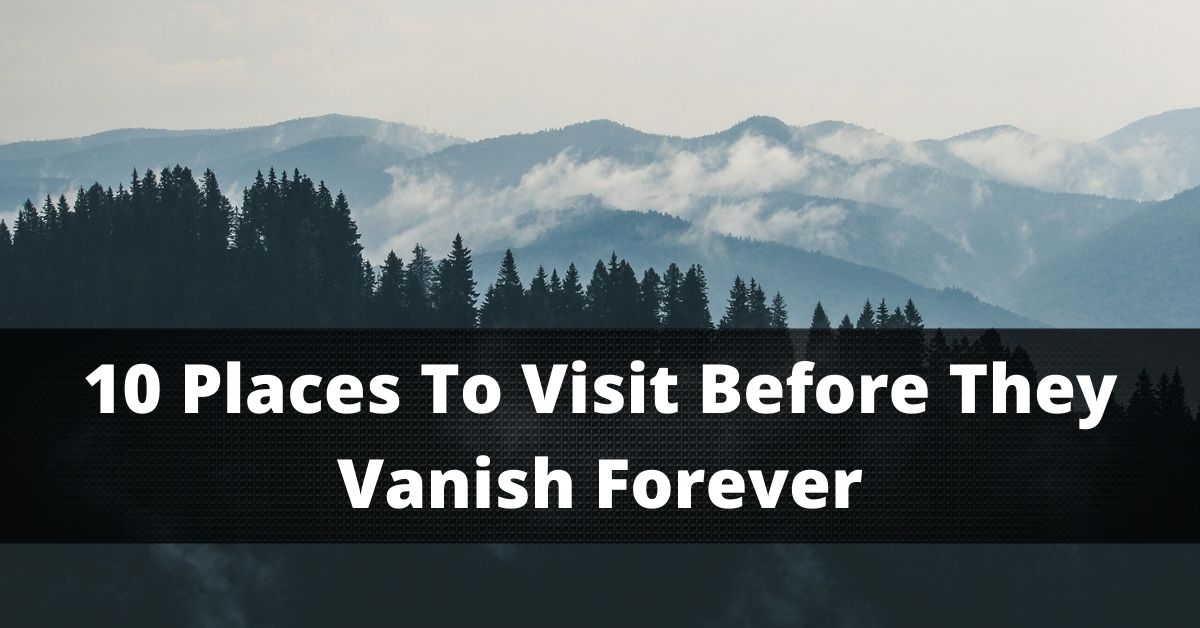 There are some destinations that travelers should add to their bucket lists before it’s too late.
There is always the risk of losing places or species we want to see in this ever-changing world. Many well-loved places are at risk of disappearing forever due to climate change and rising sea levels, and this is happening much sooner than any of us would like.

This massive national park encompasses over 1500 square miles of Montana’s mountainous region carved by glaciers. It’s an easy place to spend time with over 700 hiking trails, especially for those interested in photography. Camping and cycling are also popular, and the wildlife ranges from grizzlies to goats. Glacier National Park, for example, is directly affected by glacial melting.

The world’s largest coral reef is located off the coast of Australia. In fact, it is made up of nearly 3,000 individual reefs and spans thousands of kilometers! Unfortunately, since 1995, the Great Barrier Reef has lost more than half of its coral reef. This is a result of global warming and the effects of warmer seas on coral. At the reef, snorkeling and boat rides are popular activities. It’s worth making this a top priority before the warming climate causes even more damage to the reef.

The enigma of a cloud forest (named after the trailing mists that hang in the air) is unrivaled. Monteverde, which covers 10,500 hectares, attracts over 70,000 visitors each year. Adult admission is $25, with a $5 parking fee. Most visitors stay in the forest for two or three days to walk through the hazy, dreamlike atmosphere.

Glacier Bay’s fjord is formed by a single glacier with a thickness of thousands of feet. The park itself covers 3.3 million acres of mountainous terrain, fjords, coastline, and, of course, glaciers that are now being impacted by global warming. There is no admission fee to this park. Glacier Bay is home to an abundance of wildlife, including moose, deer, bald eagles, and wolves, which one might not associate with Alaska.

This Tanzanian treasure is world-famous for being the highest free-standing mountain on Earth, made up of a dormant volcano. This trip is geared toward the avid adventurer; climbing Mount Kilimanjaro is an ideal trip for first–time trekkers. However, Kilimanjaro is not for the faint of heart. Changes in altitude and temperature can be taxing on the body. Climbs vary in price, but in general, they can be completed for $2,000 – $6,000. The ascent to the nearly 20,000-foot-high summit takes about five days, and the descent takes about two. There are also three-day treks available. Kilimanjaro’s snows are melting and are expected to be completely gone by 2033.

The Maldives, also known as the Maldives, are an archipelago in the Indian Ocean. The Maldives’ water is clear turquoise, and the islands’ freestanding huts are iconic. Spa trips, scuba diving, dolphin watching, and surfing are popular activities; however, 80 percent of the islands may become uninhabitable by 2050 as the Maldives is swallowed up by the warm sea waters.

Venice is known as the “Floating City,” but it may not be able to stay afloat for much longer. Since the twentieth century, the city has been sinking because its wooden foundations are no longer supporting it as well as they once did. While efforts are being made to keep the city above rising sea levels, it is a good idea to start planning for this trip before travelers are forced to walk through the ocean to reach the city.

The Dead Sea, which separates Jordan and Israel, is shrinking. Along with it, the fresh water aquifers that surround the Dead Sea are depleting, resulting in massive sinkholes that swallow everything from palm trees to roads and even buildings. Take your time! The Dead Sea, on the other hand, has many beautiful botanic gardens, reserves, and photographic opportunities. Visit while you still have the opportunity.

Alexandria is yet another city at risk of sinking as a result of climate change. If action is not taken, the world may lose this port city known as the home of the Alexandria Lighthouse. This vibrant city offers a plethora of activities, including scuba diving, fantastic restaurants (especially seafood), and numerous historical and cultural opportunities.

While the end of the century may seem a long time away, the consequences of what is to come are already being felt. Glaciers are melting, sea levels are rising, and all of these beautiful places are slowly disappearing. They are expected to become extinct in this century, possibly as early as 2030 or as late as the end of the century. All of these locations are stunning, with views that will provide the perfect backdrop for photos every time, or with a wide variety of animals and plants in the area. The time has come to appreciate our beautiful planet!