HomeGeneral7 most famous mummies of Egypt and their fascinating history
General

7 most famous mummies of Egypt and their fascinating history 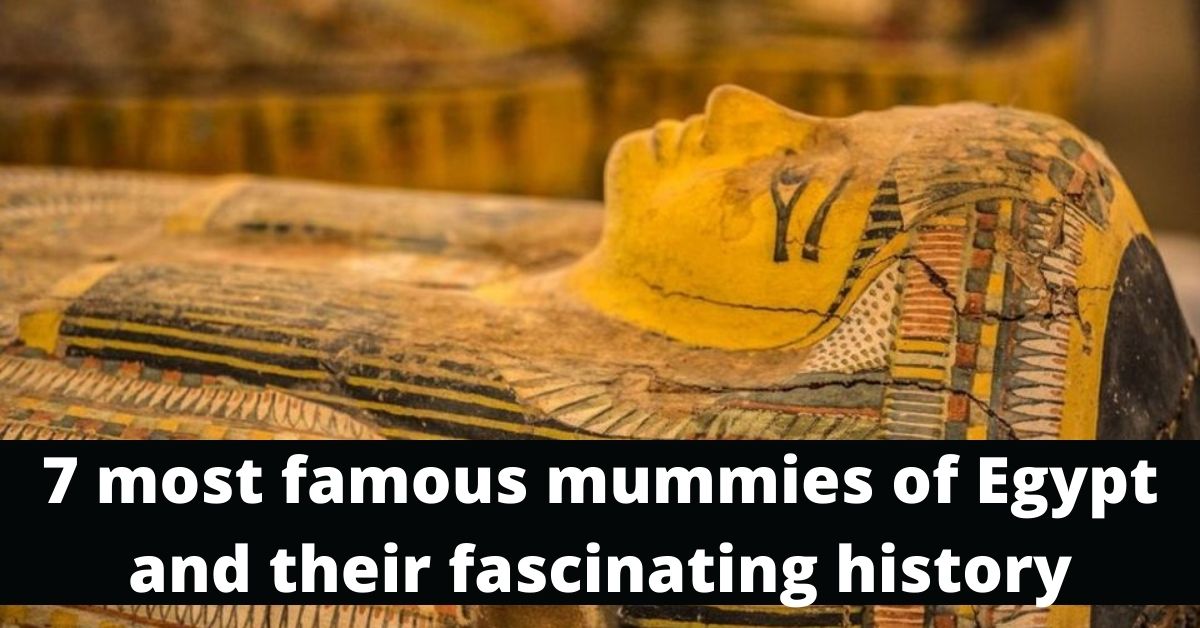 The Valley of the Kings in Luxor, Egypt, is home to some of the most famous mummies ever discovered.

Ancient Egyptian mummies from the 119-year-old Egyptian Museum in Cairo are said to be moved to the National Egyptian Civilisation Museum in Egypt’s medieval capital, Fustat. The mummies are from 22 kings and queens who lived more than 3,000 years ago.

Seqenenre Tao II, the southern Egyptian king who ruled around 1,600 BC, is expected to lead the procession, which will feature the mummies of 18 other kings and queens. Ramses IX, the ruler of the 12th century BC, will be the final entry. Additionally, Ramses II and Hatshepsut will accompany the procession.

Since the 1950s, most of the mummies in the Egyptian Museum have been housed in a single room. Displayed in a sarcophagus, they will now be housed in a purpose-built facility. A new museum near the Giza pyramids will open in the next few months that will house the mummy of Tutankhamun, one of Egypt’s most famous pharaohs.

The seven famous Egyptian mummies unearthed in the last century are profiled here.

1. The mummy of pharaoh Tutankhamun

Tutankhamun’s mummy was discovered by British archaeologist Howard Carter in Egypt’s Valley of the Kings in 1922. While the tomb was rumored to have been robbed several times, it was still full of valuable artifacts, including a gold funerary mask and a large collection of jewelry. After the discovery, Egyptology became a worldwide topic of interest.

A computer analysis using wave penetration proved that the child king had died from hunting injuries after decades of debate. At the age of nine, King Tutankhamun assumed the throne of Egypt and ruled for the next ten years. When Carter’s partner and financier, Lord Carnarvon, died from an infected mosquito bite a few months after his tomb was discovered, the legend of the mummy’s curse was born.

2. The mummy of Hatshepsut

During her nearly two-decade reign, Hatshepsut was one of Egypt’s most influential women, establishing new trade routes and undertaking large-scale construction projects. A widowed Thutmose II queen, she was appointed regent after her husband’s death in 1479 BC to rule for her young stepson, Thutmose III, until he reached legal adulthood. It wasn’t long before she declared herself Pharaoh. Like Tutankhamun, she was unearthed by Carter in 1902, but her sarcophagus was empty.

Thanks to Carter, two coffins were found in a separate tomb, one belonging to the queen’s wet nurse and the other to an unidentified woman. Researchers from Egypt’s Zahi Hawass Museum of Antiquities set out in 2006 to find out if the other woman could be the missing queen. After discovering a molar tooth in a wooden box bearing Hatshepsut’s name, Dr. Hawass concluded that the search for Hatshepsut had come to an end.

3. The mummy of Thutmose III

When Thutmose II died, he left his son Isis, one of his secondary wives or lesser harem kings, in charge of raising him. As soon as Hatshepsut’s reign came to an end, Thutmose III made a name for himself as the new pharaoh.

A few months after assuming power, Thutmose III led an army of 20,000 men to the modern-day Israeli settlement of Megiddo, better known as Armageddon in Greek. As Thutmose III’s troops marched across Egypt, scribes accompanied them and documented the campaign’s events, creating the Annals of Thutmose III.

After leading Egypt to victory over the Greeks, Alexander the Great became known as one of the greatest military strategists of the ancient world. He was dubbed the “Napoleon of Egypt” by historians.

Ramesses I and Sitre had a son, Seti I, who became Pharaoh of Egypt during the New Kingdom (19th Dynasty). Seti I was the father of Ramesses II. As a young pharaoh, Seti sent his army north to reclaim some of the Egyptian prestige that had been eroded by the turmoil of the late 18th Dynasty period.

While in northern Palestine and Syria, he fought the Hittite King Muwatallis at least once. He then signed a peace treaty that may have established the border between Lebanon and the Anti-Lebanon mountains at Kadesh on the Orontes River.

Egypt’s frontiers were fortified, the mines and quarries were opened, wells were dug, and the temples and shrines that had fallen into decay or were damaged were rebuilt. Karnak temple, which was started by his father, was also taken over by him. One of the Valley of the Kings’ finest tombs, Seti’s, has been described as one of the most beautiful ever found.

5. The mummy of Ramesses II

Known as Ramesses the Great, he was one of the most well-known Egyptian pharaohs thanks to his campaigns and various monuments. As a result of his extensive military service, Ramesses’ body showed signs of healed injuries and arthritis, as well as a hardening of the arteries and a large infection in his mouth that could have killed him.

Nearly six decades later, Ramesses II died at the age of 90. He is also said to have fathered over 100 children. Discovered in 1881, his mummy’s remains were found in the Valley of the Kings. In 1974, Ramesses II’s body was flown to Paris to be treated for a fungal infection, and he was issued an Egyptian passport that listed his occupation as “King (deceased).”

Meritamen, along with her half-sister Bintanath, were both Pharaoh Ramesses the Great’s daughter and his great royal wife because incestuous marriages were common in ancient empires.

It is said that Meritamen was a singer for Amun and Hathor, as well as an instrument player for Mut and a performer for Horus. She was also known as the Beauty in the Palace, the beloved of the lord of two lands. She was famous for her fragrance, which spread throughout the forecourt. She was the superior of Amun-Ra’s harem. In the Valley of the Queens, she was buried with honor.

She is best known for her beautiful limestone statue, the White Queen, which can be found at the Ramesseum, the temple complex built by her father.Along with other family members, she too appears over the walls of the Abu Simbel Temple.

Her grandfather, Senakhtenre Ahmosea, reigned in the 17th Dynasty, and Ahmose-Nefertari was born in the city of Thebes during this time. She was Ahmose I’s great royal wife and the mother of at least three sons. Her son, Amenhotep I, succeeded his father as king of Egypt. In addition, she was the mother of two royal wives, Ahmose-Meritamun and Ahmose-Sitamun.