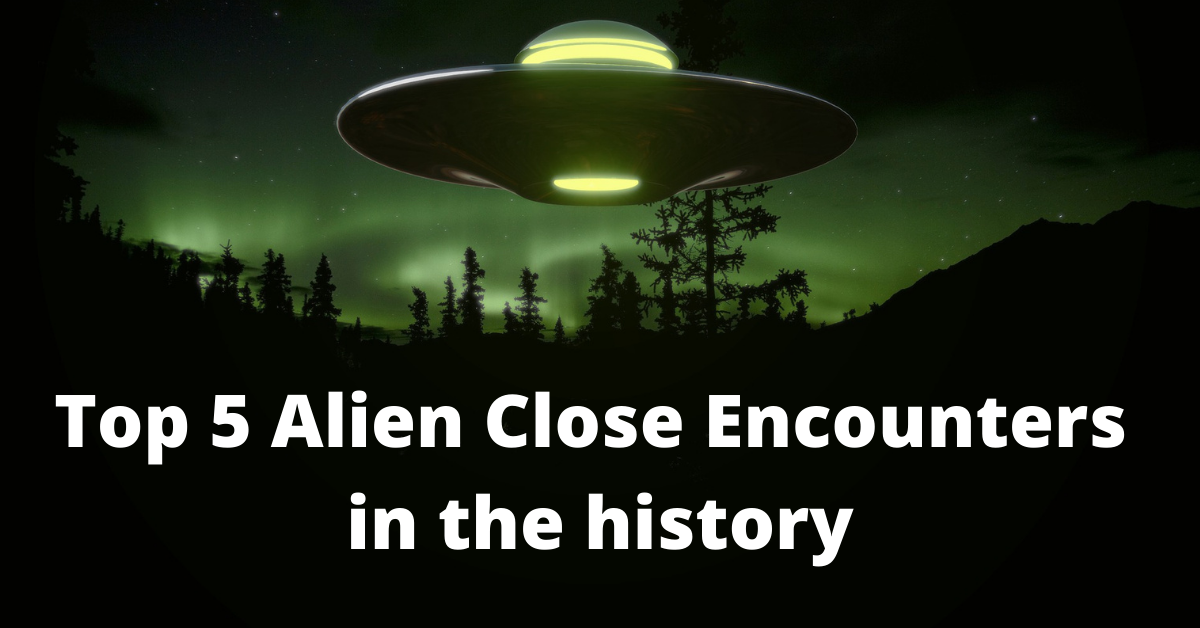 The search for life in the universe has long been a part of our journey into space. Though no concrete evidence has emerged, claims of alien contact have increased people’s faith in the existence of intelligent life beyond our planet. Here’s a list of ten alleged alien encounters that have heightened our desire to find them.

1. In 1961, aliens kidnapped Barney and Betty Hill near the White Mountains in New Hampshire. They were taken up into a spacecraft, where humanoid-like beings tested Betty for pregnancy. The couple was then directed back to their vehicle. When they arrived home, they discovered that their watches had stopped working and that they couldn’t recall the previous two hours of their journey.

On September 19, 1961, while returning to Portsmouth from a three-day trip around Niagara Falls and Montreal, American couple Barney and Betty Hill noticed a bright light in the sky that appeared to be following them.

Barney initially dismissed it as a satellite. Later, when they pulled over for a better look, Betty noticed the object was spinning through a pair of binoculars. She deduced that it was a flying saucer crossing the moon.

Her husband assumed it was a commercial airliner at first. However, when the craft descended rapidly in their direction without turning, Barney realized it was not a plane.

The couple continued driving, but when the object was only 100 feet above them, Barney came to a halt and leaped out of the car, brandishing a handgun. As he approached the pancake-shaped saucer, he noticed 11 humanoids peering out from behind rows of windows.

As a voice told Barney to put his binoculars away, he realized they were about to be apprehended. He dashed back to the car and began driving down the road, but the couple soon passed out.

When the couple regained consciousness, they had no recollection of the previous two hours. However, with the assistance of Benjamin Simon, a hypnosis specialist, the couple pieced together the events of that night.

The Hill family was brought inside the spacecraft and examined on a metal table. Their clothes were taken off, and samples of their nails, hair, and skin were collected. Betty’s abdomen was punctured with a large needle to test for pregnancy.

When Betty inquired about his home, the leader of the group showed her an instructional star map. They were then returned to their car, their memories erased.

The Hill’s story went viral in the media, and it was the first widely publicized UFO encounter. Not everyone, however, believed their story. Some psychiatrists speculated that because they were an interracial couple, they were under a lot of stress, which caused them to hallucinate.

2. A UFO was spotted hovering above gate C-17 at Chicago O’Hare Airport by more than a dozen workers. Over a dozen witnesses saw a disc-shaped, metallic spaceship spinning continuously in the 2006 incident. The UFO eventually left the scene by moving up in the clouds, leaving a hole in the clouds in its wake. The case is the most well-documented UFO sighting, and it is still a mystery.

The UFO quickly moved up, leaving a hole in the clouds and a trail of blurred clouds behind it.

The incident was reported by more than a dozen employees to the control and security centers, and the Federal Aviation Administration (FAA) was notified.

Even though the FAA warned incoming flights about the possibility of a UFO, it initially denied any claims of sightings. They later acknowledged the reports, but explained it as a rare weather phenomenon.

This was a well-documented event with numerous witnesses, and it remains one of the most enigmatic cases in modern history.

3. On 20 May 1967, while prospecting near Falcon Lake, Stephen Michalak witnessed two hovering saucers, which became one of the most credible UFO sightings. When he tried to get a close look at one of the UFOs, it scorched him with hot gas. He was left with a grid-like pattern of burn marks. In addition, radioactive metals were discovered in the surrounding area, and the landing site became devoid of vegetation.

Stefan Michalak, a geologist, was prospecting near Falcon Lake in Manitoba when he noticed two saucer-shaped UFOs, one of which appeared to land only 45 meters away.

Michalak painstakingly drew a sketch of the saucer, which later projected an opening and emitted warm, sulfurous air.

Michalak advanced towards the opening, intrigued. There, he noticed blinding diagonal-patterned and horizontal lights, as well as the absence of any joints or signs of welding on the exterior. As he did so, the object began to rotate, scorching Michalak with hot gas as it closed the opening.

The hot gas burned his clothes and left grid-like burn marks on his abdomen and chest.

Metals discovered at the site were later discovered to be radioactive, and the landing site became devoid of any vegetation or moss that had previously covered the area surrounding the site.

The case remains one of the most mysterious in the history of UFO investigations, with both the Canadian RCMP and the United States Air Force declaring it “unexplained.”

4. In 1966, more than 300 students and staff at Melbourne’s Westall High School witnessed six UFOs flying in the sky. After spotting one round UFO hovering near a powerline, five other craft arrived and attempted to approach the round UFO. After 20 minutes, the headmaster summoned the onlookers and warned them not to talk about the incident.

For about 20 minutes, 350 students and staff at Melbourne’s Westall High School witnessed a silver UFO being approached by five other UFOs.

The silver UFO was round and had a metal rod sticking out in the air, while the other five looked like planes.

Greenwood, a schoolteacher, first noticed the UFO hovering near a powerline. He noticed the silver UFO slowly accelerating, then rapidly accelerating to avoid the approaching planes. It would eventually move away from them and come to a halt.

This happened a few times before the headmaster told everyone to go back to class. He then threatened the faculty and students, telling them not to talk about the incident.

Some speculate that the incident was the result of the government secretly testing new technology, while others are convinced it was an alien encounter.

5. On October 21, 1978, Australian pilot Frederick Valentich was flying from Moorabbin Airport to King Island when he vanished without a trace. He was allegedly abducted by aliens after seeing a shiny metallic UFO hovering above him. A green light moving erratically in the sky had also been seen by residents in the area.

For a few weeks in October 1978, residents of the King Islands reported seeing a bright trailing light.

Then, on the evening of October 21, Melbourne air traffic control received an unusual message from Frederick Valentich, stating that he was being pursued by an unidentified aircraft flying 1000 feet overhead.

He radioed that the plane had four landing lights and was hovering over his Cessna 182. He noticed that the unidentified object was not an aircraft after reporting engine problems.

The operation was halted in October 1978 after an air and sea search yielded no results. Five years later, a Cessna 182 engine fowl cap was discovered on Flinders Island.

The young pilot’s disappearance coincided with reports of people seeing “an erratically moving green light in the sky.” In addition, a plumber captured an object exiting the water at high speed. According to these accounts, Federick was abducted by extraterrestrial beings who also destroyed his aircraft.

There’s also a chance Valentich became disoriented and flew upside down. As a result, he mistook the reflection of his own craft for that of another.