HomeHistoryAnn Hodges, after being hit by a meteorite in 1954, shows off...
History

Ann Hodges, after being hit by a meteorite in 1954, shows off her bruise. 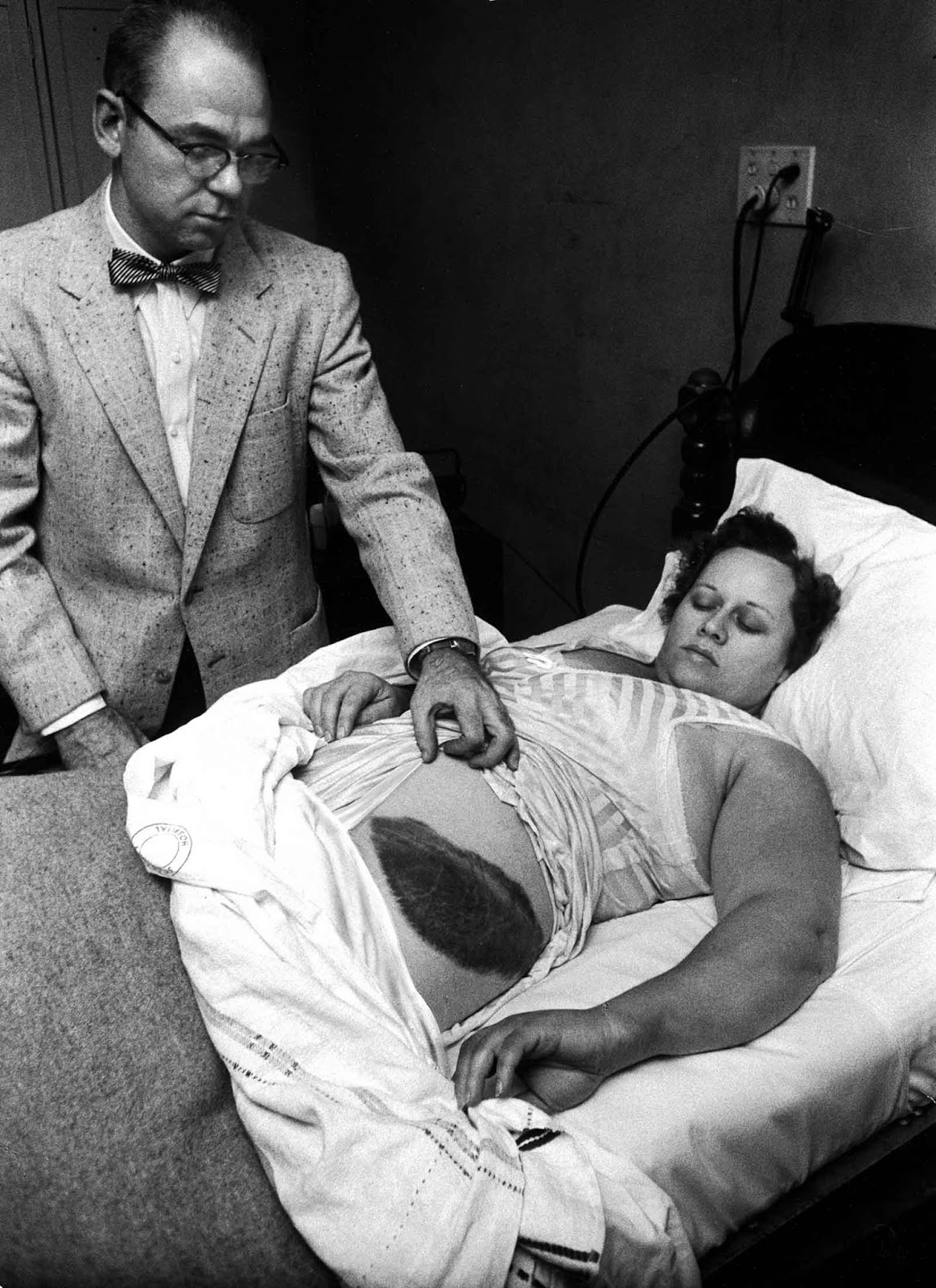 Ann Hodges was resting on her couch in Sylacauga, Alabama, in 1954, when a softball-sized bit of black rock broke through the roof, bounced off a radio, and struck her in the leg, leaving a pineapple-shaped bruise.

She assumed children were to blame when she noticed a grapefruit-sized rock on the floor and a jagged hole in the ceiling.

When her mother went outdoors, all she saw was a black cloud in the sky. Many Alabamians in and near the vicinity reported seeing a fireball in the sky and hearing a massive explosion that produced a white or brownish cloud. Most people assumed it had something to do with an airplane crash.

The doctor who looked at Ann was Moody Jacobs. He found that even though her hip and hand were swollen and hurting, there was no major damage. (He later admitted her to the hospital for several days to keep her away from the chaos.)

The object was found to be a meteorite weighing 8.5 pounds and measuring seven inches in length by a government geologist working in a nearby quarry.

Ann Elizabeth Hodges, 34, became the first documented case of a human being struck by a meteorite as a result of the incident.

It broke up into at least three pieces, one of which fell through a roof, hit and bounced off a radio, and landed on Mrs. Hodges, who was napping on her couch.

Although the official time the meteorite soared across the sky was 12:46 pm, she remembers the meteorite passing through her roof at 2:00 pm local time.

Mrs. Hodges and her mother, who were present at the time, assumed the chimney had collapsed due to the amount of dust and debris. They alerted the police and the fire department as soon as they observed the large rock.

The meteorite was taken by the Sylacauga police chief, who then handed it over to the US Air Force. The rock was claimed by both the Hodgeses and their landlord, Bertie Guy, who claimed it had fallen on her property.

For the meteorite, there were offers of up to $5,000. Bertie Guy and the Hodgeses reached an agreement, with the Hodgeses paying $500 for the rock.

However, by the time it was returned to the Hodgeses over a year later, public interest had faded, and they were unable to find a buyer.

Mrs. Hodges eventually decided to sell the meteorite to the Alabama Museum of Natural History, against her husband’s wishes and for roughly $25, as he recalled.

Julius K. McKinney, a farmer who lived near the Hodges, was probably the only key figure in the entire Sylacauga meteorite story to have a happy ending.

He spotted a second chunk of the meteorite in the middle of a gravel road on December 1, 1954, the day after Ann Hodges was injured. McKinney was able to sell his rock to the Smithsonian Institution for enough money to buy a small farm and an used car.

After the commotions subsided, Ann had a long nervous breakdown and had to be hospitalized.

Her marriage to her husband suffered as a result of the collapse, and the couple separated in 1964. Anne Hodges died in a Sylacaugan nursing facility eight years later. She was only 52 years old when she died.