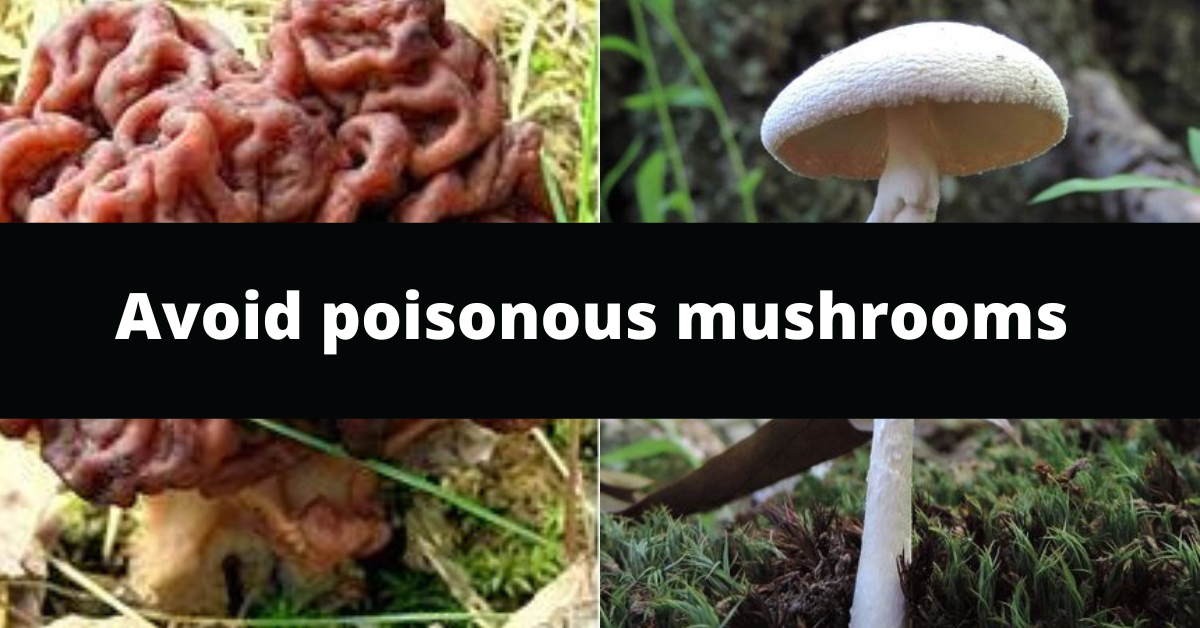 There is no straightforward technique to determine whether a wild mushroom is toxic. To be certain, you must first recognize and educate yourself about it. Numerous mushrooms are non-poisonous, while others are edible. The quantity of edible species varies according to the geographical area. For example, the Alabama Mushroom Society’s website lists 18 common edible mushroom species. However, caution is advised. Several appetizing species have deadly counterparts. Extra caution should be exercised when inspecting wild mushrooms for minute details. It can mean the difference between a close call and a trip to the ER – or even the morgue!

According to the American Association of Poison Control Centers, 5,799 mushroom poisonings occurred in 2019, including two fatalities. Many of those cases are very likely caused by accidentally eating a mushroom that isn’t meant to be eaten.

To prevent getting included in a future report’s data, thoroughly familiarize yourself with the wild mushrooms in your area before attempting to consume them. The following suggestions may be of assistance.

The best recommendations for recognizing mushrooms

Mushrooms are the fruiting structures that contain spores of a fungal network. Occasionally, fungus inhabits underground environments. Alternatively, they thrive in various organic environments, such as decaying trees. Although not all fungi create mushrooms, those that do exhibit a characteristic mushroom morphology. When spore dispersal circumstances are favorable, as they frequently are following rain, the mushrooms emerge, release spores, and shrivel up within a few days. Here are some suggestions for anyone interested in mushroom education.

1. If you’re serious about eating wild mushrooms, you’ll need to spend some time learning how to recognize them. There are good field guides to fungi available for several geographic regions. Additionally, iNaturalist includes a straightforward reference to the most common mushrooms found in North America by season: spring, summer, and fall. It’s important to keep in mind that not all of the animals in those collections are food!

2. Ideally, you will work with mentors who are knowledgeable about mushroom foraging. Why not take it a step further and learn from professionals in your community? Become a member of a mycology club. The North American Mycological Association has a list of clubs in every state and province in both the United States and Canada, so you can find a group near you.

3. If you do decide to go mushroom hunting, only pick up fresh specimens. You want those that have not yet degraded and do not appear to have been picked apart by animals or insects. It goes without saying that you should avoid collecting places contaminated with chemicals such as pesticides, lead, and petroleum products.

4. Always cook mushrooms thoroughly if you are convinced that they are edible. Numerous health professionals recommend boiling mushrooms to eliminate toxins contained in their raw state. Cooking mushrooms also improves their digestibility, allowing for the release of nutrients such as proteins, B and C vitamins, and minerals. If you’re eating a wild mushroom for the first time, try a small piece of cooked mushroom to see if it makes you sick.

By the way, depending on your area, some mushroom species are seasonal, while others are more widespread throughout the growing season. In the spring, morels are a popular mushroom forager. Summer brings another popular fungus, the chanterelle, to mushroom hunters’ attention. Fall is probably the most intriguing season for mushroom fans, as this is when a large number of fungus species produce mushrooms. Chanterelles, chicken-of-the-woods, king bolete, lion’s mane, and puffballs are all edible mushrooms that grow in the fall.

Poisonous mushrooms can appear to be edible

William Needham, a mushroom expert, told us during a discussion with the Natural History Society of Maryland in June 2021 in Washington, D.C., that there are approximately 150,000 recognized fungal species. While a few of them are lethal, others are relatively common.

Needham discussed some commonly consumed mushrooms and their dangerous doppelgängers, which cause numerous poisonings each year.

In the spring, mushroom hunters are on the lookout for morels (Morchella spp.), which are renowned for their particular flavor. They grow underground beneath particular tree species, including tulip poplars, hickory, and elm. Morels should be cooked, as they are poisonous when raw and can cause illness. However, be cautious of the brain mushroom (Gyromitra esculenta), which mimics morels. They are extremely toxic due to the presence of a substance called gyromitrin, which contains monomethylhydrazine, a component of rocket fuel. Consumption of these “fake morels” can induce illness and, in severe circumstances, death.

Meadow mushrooms (Agaricus campestris) are closely related to button mushrooms found in stores. Fresh pink gills identify these mushrooms, which are frequently seen in fairy rings in pastures, garden lawns, and compost piles. However, there is a terrible doppelgänger to meadow mushrooms that Needham believes is the most important to understand: Amanita bisporigera, or the destroying angel. They resemble meadow mushrooms, are found in similar settings, and are extremely numerous. These venomous mushrooms can cause liver damage and even death. Among the many poisonous mushrooms found in North America, false parasol (Chlorophylum molybdites) is one that looks a lot like a parasol. It is the most common poisonous mushroom in Europe.

Chanterelles (Cantharellus spp.) are attractive yellow-or orange-colored mushrooms that grow at the base of trees. Unlike button mushrooms, chanterelles feature ridges on the undersides of their caps rather than fine-edged gills. Chanterelles have a toxic doppelganger, the jack-o’-lantern (Omphalotus illudens), sometimes known as the fake chanterelle. How are they distinguished? Unlike chanterelles, jack-o-lanterns grow on wood and have fine gills beneath their caps. Consuming jack-o-lanterns will not kill you, but it will make you sick for a few days.

Other mushrooms that are edible

Other mushrooms that are edible don’t have doppelgängers, but it’s still important to make sure you know what they are.

The polypore mushroom Hen-of-the-Woods, or maitake (Grifola frondosa), is regarded as a therapeutic fungus. The edible chicken-of-the-woods is another popular polypore (Laetiporus sulphureus). While this is not a medicinal mushroom, it does have a pleasant flavor. It reminds Needham of chicken breast flesh, he says. Both types of mushrooms can grow fairly large.

Tree ear (Auricularia auricula) and witches’ butter are examples of edible gelatinous mushrooms (Tremella mesenterica). They are not extremely healthy and contain a small amount of protein in comparison to other mushrooms.

It is possible to come across mushrooms that resemble marine coral. This is the magnificent coral fungus. Generally, they are found on trees. Cauliflower mushrooms are a well-known food among them (Sparassis radicata).

Another species of mushroom, which appears in the late summer and fall, is the tooth fungus. The lion’s mane mushroom is perhaps the most well-known of these (Hericium erinaceus).

Puffballs are often round or pear-shaped and are edible. Certain species, such as the gigantic puffball (Calvatia gigantea), can attain the size of a soccer ball. When a puffball is cut open and the interior remains white, the mushroom is still fresh.

Boletes are ground-dwelling mushrooms with fleshy stems. The majority, such as the king bolete (Boletis edulis) and old-man-of-the-woods, are edible (Stobilomyces floccopus). Particular mushroom specialists advise against eating certain colored boletes that have a bitter taste and turn blue when pressed.

The honey mushroom (Armillariella mellea) and oyster mushrooms are also edible mushrooms to look for (Pleurotus ostreatus). As with morels, honey mushrooms must be cooked thoroughly to eliminate poisons.

A few other mushrooms to stay away from

Some mushrooms, such as the red-and-white fly agaric (Amanita muscaria), contain psychoactive substances that can induce trance-like states and hallucinations. Obviously, these varieties of mushrooms should be handled with the utmost caution.

The bottom line is that if you’re interested in gathering and eating wild mushrooms, you should educate yourself about field identification techniques.