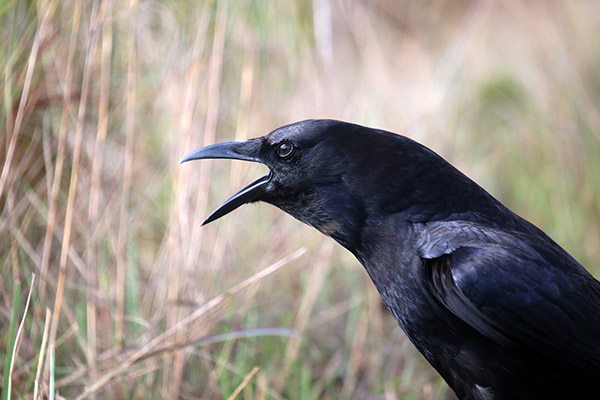 We humans seem to have a fascination with wildlife. We tag them with satellite transmitters, outfit them with radio collars, spy on them with trail cameras, and use other observation techniques to learn more about their lives and secrets.

So it fascinates me when we find out that wildlife is watching us.

That is especially true in the case of crows. Corvid intelligence research has exploded in the last few decades. Corvids are a family of stout-billed birds that includes crows, jays, magpies, and ravens. We now know that crows use traffic to crack hard-to-crack nuts and that they can figure out how to complete a complicated series of events in order to solve a puzzle.

And, just recently, we realized that they are as intelligent as a seven-year-old child in some ways—and that they are definitely watching us to learn more about humans.

Birds were mostly dismissed as simpletons until the twenty-first century. After all, how intelligent can you be with a brain the size of a nut, the theory went, and taunts like “birdbrain” were common.

However, research has shown that birds, more than mammals, make good use of the allotted space for their tiny brains by packing in a lot of neurons. And crows are among the most intelligent birds.

Crows, for example, can understand analogies, exercise self-control, fashion tools, and enjoy playing, all of which are signs of intelligence.

An article published in the science journal PLOS ONE in July 2014 provides a comparison estimate for that brainpower: the authors concluded that crows are just as good as a human seven-year-old child at reasoning.

Six wild crows were subjected to a series of tests meant to examine their knowledge of causal relationships in this study. The water displacement challenges were all based on an Aesop’s story in which a thirsty crow puts stones into a pitcher to raise the water level.

The crows needed to figure out how to get floating food rewards by dropping heavy objects into water-filled tubes. They were able to choose solid rather than hollow objects, and a high-water-level tube over one with a low water level, indicating a preference for the tube that would provide them the food with the least amount of effort, and a water-filled tube over one filled with sand. The crows filled the tubes with enough rocks or other heavy objects to make the food reachable.

According to a study conducted by the University of Cambridge in 2012, such work is very difficult for children. While children aged seven to ten were able to understand the rules, it took them several tries to figure out how it worked. However, children aged four to six were unable to answer the problem. They threw the stones into the tubes at random and didn’t always get the token (their version of the crows’ food reward). Thus, the crows performed at a level that only seven- to ten-year-old youngsters have been able to accomplish in a water displacement test.

Crows are learning about human behavior.

Crows have a strange ability to remember human faces. They can bear grudges against some of us, and they will tell other crows about it. In fact, they seem to know that each person is different and that they need to treat each of us in different ways.

In 2011, two University of Washington researchers captured, banded, and released seven to fifteen crows at five separate locations near Seattle, each wearing an identical “dangerous” mask. To find out how the captures affected the crow population, people who walked a certain route over the next five years kept track of the birds’ behavior. One of the trapping sites was on the route. These observers wore either a “neutral” mask or one of the “dangerous” masks that were used during the early trapping incidents.

During the first two weeks after trapping, an average of 26% of the crows met scolded the person wearing the risky mask. After 15 months, the figure had risen to 30.4 percent. After three years of no action against the crows, the number of scolding crows had increased to 66%. Clearly, the crows were “talking” to one another about the people, passing on the threat information among peers and down through generations.