HomeGeneralLaws Named after Victims: Every Law in the United States Named After...
General

Laws Named after Victims: Every Law in the United States Named After a Victim, and What It Does 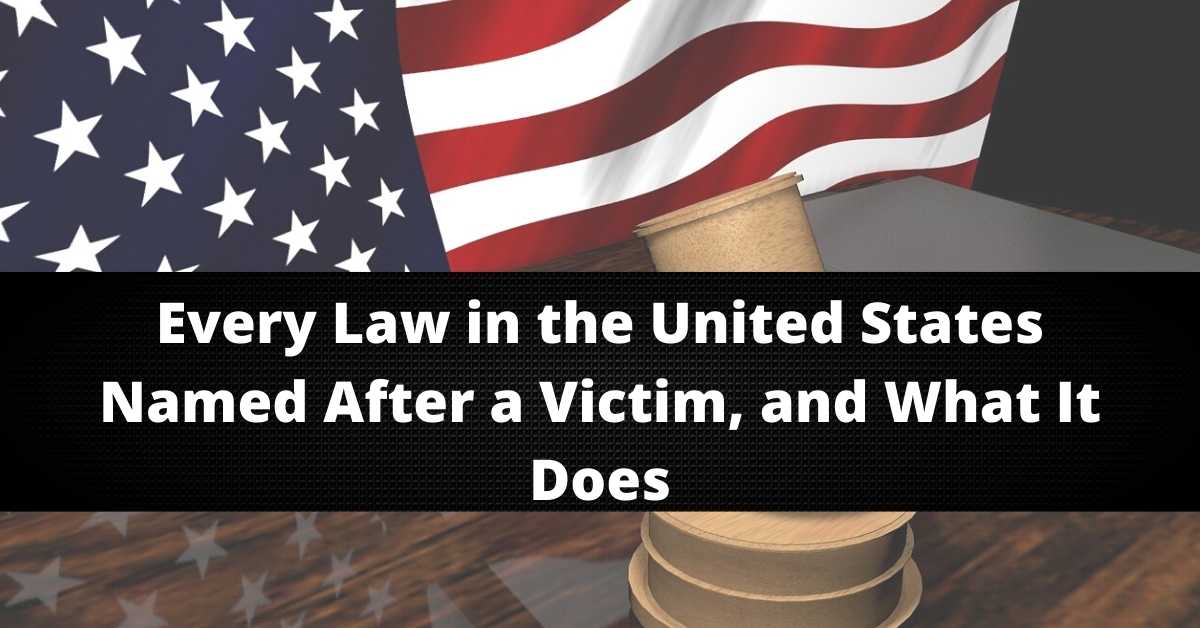 Laws named after victims continue to be a source of contention. While there are many violent crimes committed each year, only a small percentage of them result in changes to our legal system. When it comes to laws enacted in the United States as a result of crimes, public outrage is crucial. Kidnappings, murders, and suicides that are particularly heinous receive an unusual amount of media attention, often resulting in the widespread outrage required to pressure politicians into reforming the legal system.

When the crimes that resulted in new laws were committed, they were already illegal. The legislation that results is usually viewed as closing a loophole or addressing a specific aspect of the crime. However, there is a lot of debate in the public about whether or not such laws are ethical or effective. On the one hand, people who have laws named after them are honored and remembered, but critics argue that such laws are frequently too reactionary to be truly effective.

Browse this list if you’re not sure where you stand on the issue. It will assist you in gaining a better understanding of how and why certain crimes result in new laws.

Kari Dunn took her three children to see her estranged husband, Brad, in a Marshall, Texas motel room on December 1, 2013. Kari had started the process of divorcing her husband of ten years and had already started dating someone new two weeks before.

While their nine-year-old daughter struggled to call 911, the separated couple went into the motel bathroom to talk. Instead, Brad pulled out a knife and stabbed Kari 21 times.

The young girl was unable to summon police to the scene of her mother’s murder because the motel phone required users to dial a nine before the phone number.

Kari’s Law, which was first enacted in Texas and then signed into federal law by President Donald Trump in February 2018, requires multi-line telephone systems to have a way to dial 911 that bypasses any normally required codes before dialing.

Lauren Laman, an 18-year-old Illinois high school senior, collapsed during drill team practice in February 2008. The sudden cardiac arrest that led to her death was caused by a heart condition called mitral valve prolapse, which caused one of her heart valves to close improperly at times. It took 13 minutes for medical personnel to arrive and transport Laman to the nearest hospital’s emergency room.

Laman’s father, George, believed that the presence of someone who could have performed CPR or used an automated external fibrillatory to shock his daughter’s heart would have saved her life.

The act, which was passed in June 2014 by the Illinois General Assembly, requires schools to properly train and educate students and faculty in the use of CPR and automated external defibrillators as part of their regular curriculum. Students who do not have parental permission are exempt from the requirement.

On March 12, 2011, Pamela Schmidt went to her boyfriend Bill Parisio’s house to end their relationship. Schmidt had reportedly grown tired of trying to help Parisio, who had been battling drug addiction for years. Schmidt slept in the finished basement of his Cranford, New Jersey home after the breakup and planned to leave the next morning.

Parisio beat Schmidt with a 12-pound dumbbell that night before strangling her. Parisio had been using bath salts, a legal substance similar to meth that could be purchased in smoke shops and convenience stores, for three months prior to the murder.

Pamela’s Law, which was signed into law in August 2013, made it illegal to buy or sell the chemicals used in the production of bath salts. In New Jersey, the drug was also classified as a controlled substance, similar to cannabis or cocaine.

Caylee Anthony, two years old, had been missing for a month before her mother, Casey Anthony, reported her missing to authorities in July 2008. Caylee’s body was later discovered near the Anthony home, leading to a trial in which Casey was the main suspect. Casey’s partying during the month her daughter was missing drew media and public attention during the trial.

Casey was found guilty of lying to the police after being acquitted of the murder charges. The public was outraged that a two-year-old girl could go missing for a month without her mother facing any consequences.

Caylee’s Law mandates that parents or guardians report a missing child within 24 hours of the child’s disappearance. It also mandates that a child’s death be reported within an hour. Individuals who do not follow these guidelines will be charged with a felony and may face jail time in the states that have enacted the law.