HomeHistory15 Facts about the Titanic that are untrue
History

15 Facts about the Titanic that are untrue 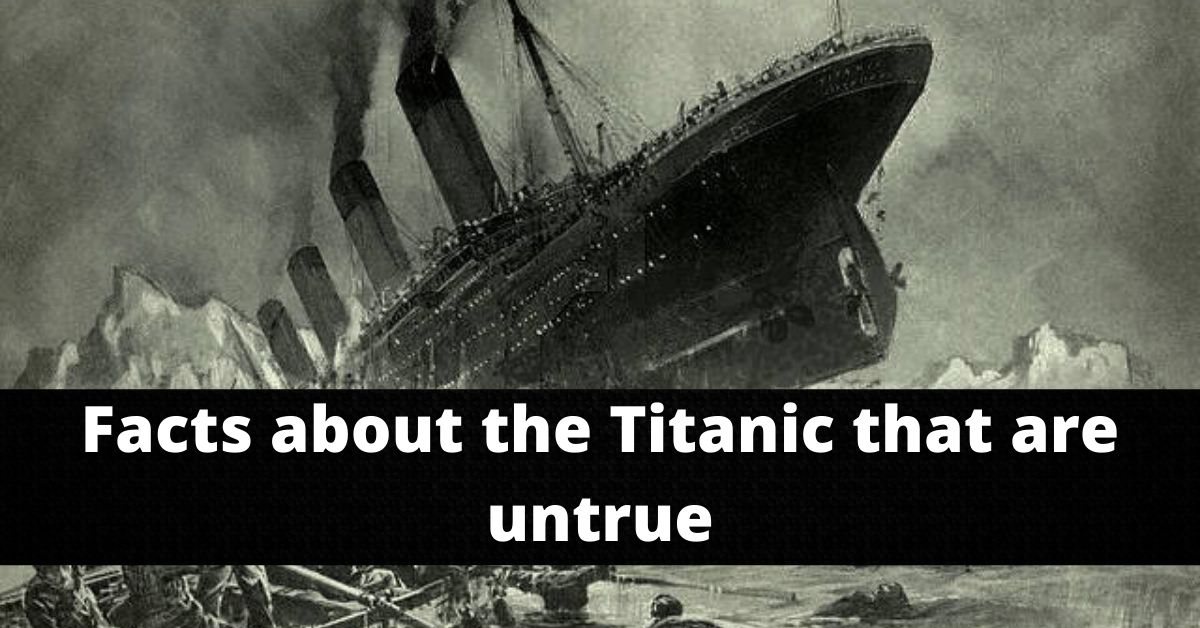 The RMS Titanic’s sinking was one of the most tragic events in modern history. On an icy April night in 1912, the luxury ocean liner sank on its maiden voyage from Southampton, England to New York City, killing over 1,500 passengers and crew members. She was the largest ship to sail the Atlantic at the time, and one of three new luxury White Star Line ships, so the ship’s sailing became a major topic of discussion in the media.

With such a tragic loss, rumors and legends abound, some of which are based on fact and others which are complete fabrications designed to add to the mystery surrounding the sinking. After all, when the ship sank in the North Atlantic shortly after 2 a.m., it was a highly publicized voyage carrying some of society’s wealthiest – the perfect recipe for a conspiracy.

Similarly, Hollywood’s obsession with the Titanic fuels myths about the real ship, and James Cameron’s 1997 box office hit Titanic is, unfortunately, the source of “facts” for many curious viewers. Fortunately, we have contemporary evidence in the form of photographs and news articles, as well as testimony from survivors. The discovery of the Titanic’s wreckage in 1985 provided scientists with new details about the sinking that had previously remained unknown for more than 70 years, so it’s time to listen to historical and scientific fact and leave the cinematic productions to the realm of entertainment.

1. Titanic was marketed as “unsinkable” by White Star Line

The major misconception about the Titanic was that the company that built it, White Star Line, claimed that their newest ship was so innovative that it was completely unsinkable—its sealed watertight compartments equipped with doors that could shut off flooding in the event of an accident, and there was no fear of a disaster.

Though this has never been proven, a crew member was reported to have said “God himself could not sink this ship!” as passengers were boarding, and the quote exploded after the sinking, perpetuating the rumour that it was made by White Star Line.

Lifeboat myths appear to be our preferred explanation for the Titanic’s demise, but they all prove to be false. It was not due to White Star Line’s negligence that so many died on the Titanic; in fact, Titanic had an excessive number of lifeboats in order to keep passengers safe.

The laws of the time mandated that each ship have a specific number of lifeboats based on its weight, not its passenger capacity or even the number of tickets purchased. In the case of the Titanic, she was required to have lifeboats capable of carrying 1,060 passengers, but she only had enough for 1,178.

3.Weather Warnings Were Ignored By The Captain And Crew

To make his speed record and earn himself endless praise, Captain Smith is said to have ignored weather warnings and ordered his crew to speed up the ship and press on even faster through the night.

It could be because Smith was a commanding captain who pushed his ships and crew harder than most captains would, but he was not reckless. He informed the entire crew of the iceberg warnings, which he then pinned up in the chart room. Smith was daring, but not dangerous enough to bring the Titanic down.

4.The Titanic was intentionally sunk as part of a banking conspiracy.

The conspiracy that the Titanic was deliberately sunk by bankers in order to establish the Federal Reserve is one of the most implausible, but it retains its adherents. When you consider some of the millionaires and important businessmen who perished aboard the Titanic, such as John Jacob Astor IV and Isidor Strauss, among dozens of others, it may appear plausible at first.

But it’s simply not true—those millionaires had little to do with the Federal Reserve, and the US banking dynasties that supported it had more important rivals to avoid. Overall, building such a massive ship and then sinking it would have been more trouble than it was worth.

5.The Titanic was sunk by a coal fire.

A new theory recently emerged, claiming that a coal fire may have contributed to the Titanic’s demise. Senan Molony presented a documentary on the Smithsonian channel, claiming that photographic evidence from before the Titanic’s departure shows that a fire weakened part of the hull so badly that it was visible in grainy, early photography (see the dark smudge in this photograph).

Scholars of the Titanic have refuted these claims, arguing that coal fires were common on coal-powered ships and that the fire had been known about since 1912. If it had been a concern, the ship would not have sailed.

Another story, tying into the curse of Titanic not being properly christened, claims that Titanic was. The ship’s owners took part in the traditional champagne-bottle ceremony, but things didn’t quite go as planned. The bottle did not shatter when it clattered against the hull, and the Titanic was not baptized by the bubbly golden drink.

This was not true because White Star Line did not christen their ships, but perhaps they should have since both the Titanic and her sister ship, the HMHS Britannic, perished, accounting for two-thirds of the luxury Olympic class steamships.

7.During the sinking, Steerage Passengers Were Locked Below Deck.

When we saw the steerage passengers locked behind gates in Cameron’s Titanic, with an officer brandishing a gun when they tried to storm them, our hearts all broke. Fortunately, this was never how passengers were treated on the ship, and they were given the same opportunities as upper-class passengers.

True, there were lockable gates to lower decks, but they were only to be used if poorer passengers, mostly from continental Europe or Ireland, were found to be carrying disease. Of course, this was not the best way to treat your passengers, but the gates were not used unless there was a disaster.

If the Titanic was inherently unlucky, one of its crew members held all the good fortune the ship required.

Frank Tower was a fireman on the Titanic’s lower decks, according to legend. He managed to save himself during the ship’s sinking and later went on to work on the Empress of Ireland, a ship that sank two years later after colliding with another ship, Storsad. After that, he happened to be aboard the RMS Lusitania during WWI and survived yet another sinking.

There is no record of a Frank Tower ever boarding any of these ships, so the legend is based on urban maritime legend.

9.David Sarnoff Received The First Report Of The Titanic’s Sinking 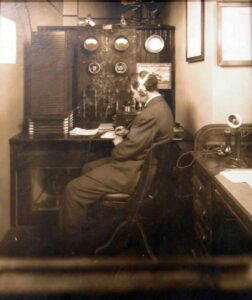 In the early twentieth century, David Sarnoff was a radio pioneer and a prominent communicator in the United States. In terms of his role in the Titanic’s radio distress signals, he was committed to his post in order to confirm the ship’s fate.

Some claim that he was the first person in New York to respond to the Titanic’s distress calls, but this is not entirely correct. He did receive its calls, but they arrived much later than expected. When they arrived at his station at Wanamaker’s department store, he stayed for three days, intent on learning more, and when the Carpathia docked in New York City, he was there to greet them.

10.J Bruce Ismay, the Chairman of White Star Line, sacrificed passengers in order to save himself.

Ismay was the chairman of White Star Line at the time of the Titanic’s sinking and was aboard the ship on its sole voyage, making him one of the most well-known and controversial survivors.

Almost everything we’ve learned about Ismay has been negative. According to legend, he was the greedy businessman who boarded a lifeboat while hundreds of poor women and children waited in line.

The story would make a great movie scene or, better yet, a newspaper article, which, like many other Titanic stories, was fabricated by Hearst-owned newspapers. In reality, Ismay was simply in the right place at the right time.

11.Men Dressed as Women Board Lifeboats

This might have worked if you were a young man with no facial hair and a particularly feminine figure. Unfortunately, no one ever tried it. This didn’t stop the media from covering it, focusing on the story of a male survivor.

William Sloper, a first-class passenger, was among the first to become aware of the danger. He came across Officer Murdoch’s lifeboats and was invited to board. Dorothy Gibson, his friend, demanded that he enter the lifeboat with her because he did not want to leave the brightly lit ship for the cold, dark water.

Later, the New York Herald sensationalized his story, causing him to flee in women’s clothing.

12.The Titanic’s Catholic builders thought it was cursed.

The ship’s anti-Catholic construction number was one of the most ominous myths surrounding Titanic, and another supposed curse on the ship. It was said that the Catholics (who were actually Protestants) who worked on the Titanic noticed—when they weren’t playing pranks on the younger laborers—that the construction number on the hull was 390904, which was rather unassuming until you mirror the next and realize it strangely resembled the phrase “NO POPE.”

This was especially disturbing to Catholics, who knew the ship was cursed before it was even finished. To disprove this, the number given to her was 401, which was far less eerie.

13.Nearby ships were alerted to the sinking but did nothing.

As the crew realized the Titanic was doomed, they frantically radioed messages, and because the incident occurred late at night, many ships nearby had their radios turned off. Ships did, however, respond, and even the Titanic’s sister ship Olympic sent word that it was racing to assist.

According to legend, a passing ship, the Samson, saw the Titanic’s flares but continued on without looking back. In reality, the Samson was nowhere near the Titanic, and the only ship that could have arrived in time, the Californian, did not receive distress calls.

The RMS Carpathia was the first ship to reach the Titanic’s survivors two hours after the ship went down.

14.During construction, workers were trapped inside the hull.

This rumour began in a pub in Ireland, Titanic’s native land, and was most likely spread by those who worked on Titanic. Harland and Wolff, White Star Line’s shipyard, was located in Belfast and employed primarily Irish workers.

More experienced workers would tell stories to the younger ones, and they discovered that telling the amateurs that workers were frequently trapped in the Titanic’s hull was especially amusing.

In reality, the inspectors would frequently tap the hull at the end of the workday to check the riveters, and the sound could easily be misinterpreted as someone trapped inside, leading some mischievous workers to make up the stories.

15.The sinking of the Titanic was the worst maritime disaster in history.

There’s no denying that the Titanic’s tragic demise is the most famous ship disaster in history, and we have mixed feelings about it, including romantic sentiments and tragic devastation. It was widely publicized and continues to fascinate us in the same way that it captivated the world in its immediate aftermath.

However, it was not the worst maritime tragedy, and if only peacetime shipwrecks are considered, the worst goes to the Philippine ferry Doa Paz, whose sinking in 1987 killed over 4,300 people.

The sinking of the Titanic was notable in its day simply because it was the world’s largest ship.