HomeGeneralFive of the Strangest Mysteries from All Over the World
GeneralHistoryWorld

Five of the Strangest Mysteries from All Over the World 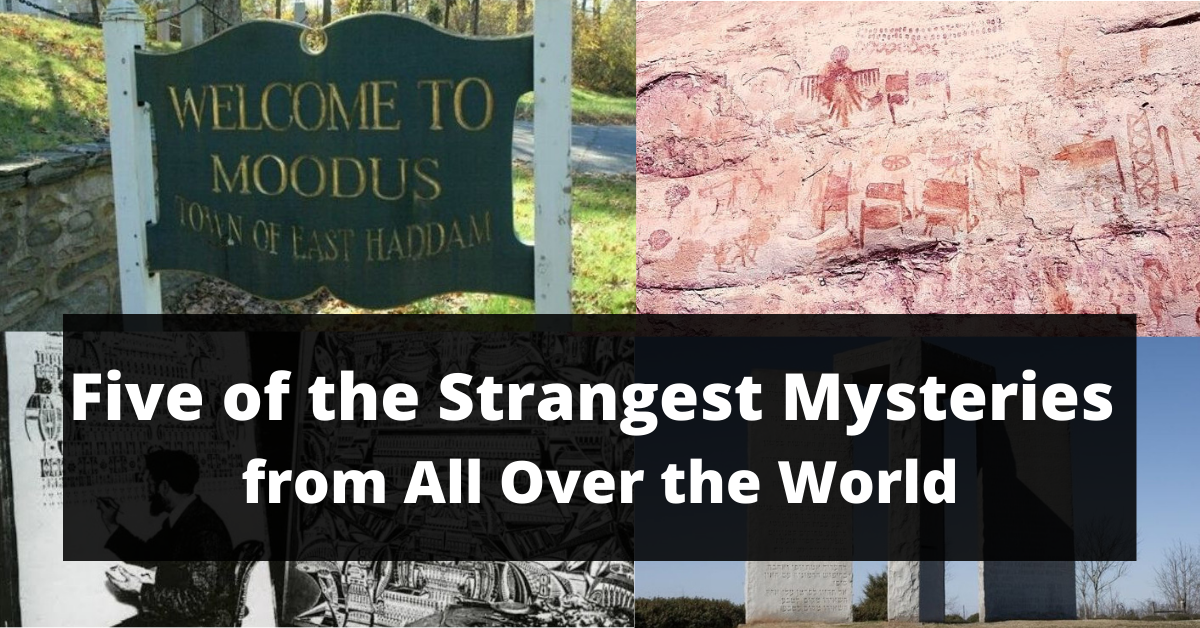 Since the dawn of time, humanity has been plagued by mysteries. While some unsolved mysteries are the result of a historic cause in which there is no way to determine what exactly happened back then, others enchant us right now. Some mysteries are so strange and inexplicable that even if they occur right in front of our eyes, we have no idea what caused them. Bermuda triangles, the Loch Ness monster, and the Abominable Snowman are just a few of the many mysteries that have been discussed at every opportunity. Our world, however, is far more mysterious than it appears. Here are some of the most bizarre things from around the world.

1. A massive swath of ancient artwork was discovered on the sides of a rocky hill in Colombia’s Amazon rainforest. It is painted on an eight-mile-long swath of rocks with ochre, “the ancient paintbrush,” and depicts several extinct creatures, such as mastodons and giant sloths.

These paintings, which are said to be around 12,600 years old, contain numerous images of various animals in exquisite detail. There are still images of smaller animals such as tapirs, apes, crocodiles, snakes, deer, and bats.

There are, however, images of Ice Age animals that are now extinct, such as giant sloths and mastodons. Scientists and archeologists believe the drawings were made by indigenous people near the current Serrana La Lindosa archaeological site in the Colombian Amazon around the time the last Ice Age ended.

Observers discovered images of people interacting with these animals and plants among the elaborate rocks after careful inspection.

2. Augustin Lesage was possibly one of history’s strangest self-taught artists. He used to be a coal miner, but after hearing a strange voice proclaiming that he would become a painter one day in 1935, he ended up painting some very artistic spiritual works that people still admire to this day. It is also said that the voices guided him as he painted these masterpieces.

Augustin Lesage, born in France to a mining family, followed in his father’s footsteps as a miner until, one day, he is said to have made contact with the spirits while mining.

Soon after, he decided to become a painter, claiming that he had no idea what art he would draw and that his spirit guides would tell him exactly what to do.

Surprisingly, his paintings were symmetrical works of art with hints of Egyptian and other Eastern monolithic designs. Experts classified his paintings as belonging to the spiritual movement, and he was regarded as an outsider artist—someone who was not integrated into the art world.

Throughout, he claimed that his spirit guides told him what colors to buy, what canvas to buy, and what to paint. Before his death, he is said to have completed approximately 800 paintings.

3. The Guidestones in Georgia, also known as the “American Stonehenge,” are a collection of five massive granite blocks that were erected in 1980. They have instructions in eight different languages inscribed on them to help people in the aftermath of an apocalypse. They also serve as a compass, a clock, and a calendar.

This monument is made up of four massive monolithic blocks, each 16 feet four inches tall and forming a “plus” sign when viewed from above. Furthermore, there is a center stone of the same height as the other stones, and all of the other stones support the center stone, which is positioned on top of them all.

It is said that it was proposed by a strange mysterious old man named Robert C. Christian, who made the people in charge sign confidentiality agreements that would make him untraceable if anyone wanted to find out who built this structure.

4. A group of divers discovered a human-sized transparent, gelatinous globule while researching a World War II shipwreck in rstafjorden, Norway, about 200 meters from the coast. For over 30 years, there have been several sightings of similar giant transparent sacs of gelatinous material.

The divers who discovered this massive transparent structure videotaped it in incredible detail and uploaded it to YouTube on October 6, 2019. The video shows hundreds of thousands of small spheres within the large globule, which are reportedly the eggs of the 10-tentacled cephalopod Illex coindetii (southern shortfin squid).

This finding has been confirmed by DNA analysis of similar globular sac samples. The globule is nearly transparent, with a colored wide cylindrical structure within. Scientists believe it is due to the ink that the female squid deposited into the sac while creating it.

Other members of the Oegopsida family, such as the shortfin squid, are also said to produce such large transparent sacs around their eggs.

5. The Moodus Noises of Connecticut have been a spectacle for centuries, ever since the native people claimed they were godly noises. The otherwise quiet rural area has always made eerily frightening and booming noises, and several theories have been proposed, none of which have been proven to be correct. The noises continue to haunt the people who live there to this day.

The small village of Moodus in Connecticut is known for the rumblings, which are strange, and sometimes even a cacophony. Moodus has a population of about 1,400 people and is located in the town of East Haddam. It is said that the place got its name from the term “Machimoodus,” which means “the place of bad noises” in the native language.

While early natives associated these noises with the wrath of a deity known as “Hobbamock,” later settlers believed it was the work of devils or witches. A carbuncle has been added to the mix of stories that seemed to revolve around these creepy and scary noises.

However, recent scientific research has linked these noises to a phenomenon known as “micro-earthquakes,” which are small movements of the tectonic plates that produce sounds at extremely low frequencies on the Richter scale.