HomeHistoryFive of The Weirdest Weapons Ever Invented
HistoryScience

Five of The Weirdest Weapons Ever Invented 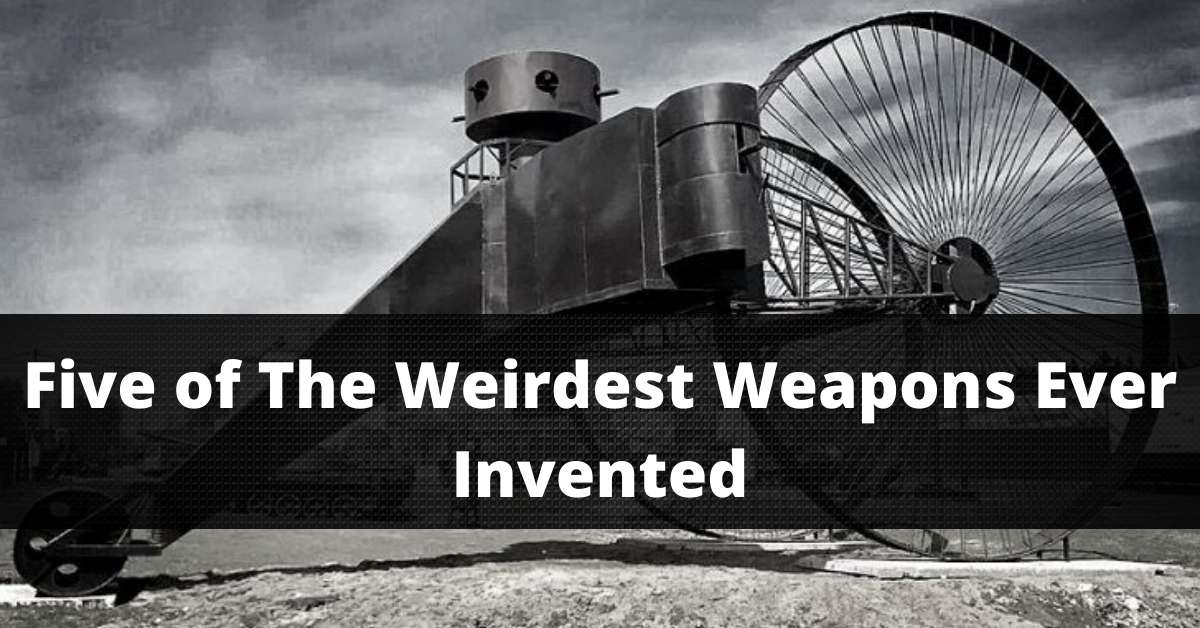 There is simply no end to the variety of weapons that humans have invented since the dawn of time. When the circumstances changed, so did the intentions, and the structure and development of the weapons. We’ve come a long way from creating tools to defend ourselves against threatening animals to mass-murdering our own species. We sometimes made disastrous weapons, but we also made some of the strangest weapons ever. The following is a list of ten of the strangest weapons ever devised.

1. A “bazooka Vespa” was invented by the French. It was a Vespa 150 TAP scooter outfitted with an M20 75mm recoilless rifle, also known as a light anti-armor cannon. The vehicle carrying the weapon could only travel at 40 miles per hour and was intended for use by French paratroopers. In the 1950s, nearly 600 of these scooters were produced.

From 1956 to 1959, the French company ACMA, or Ateliers de Construction de Motorcycles et Automobiles, produced the Vespa 150 TAP near Dijon

It had an unusual appearance, with a standard color of either dull olive or sand. The scooter had an eight-inch tire but could easily carry the weapon under its seat.

It was dropped by plane in pairs, strapped to a special pallet that sat on a cushion of hay bales.

As soon as it arrived on the battlefield, the weapon was ready for use. The Frenchmen would ride it until they reached a suitable point. Then they dismounted and used the M1917 Browning Machine Gun tripod that came with the scooter to position the gun at the perfect angle.

The destructive scooter’s production cost was relatively low. It cost around $500 at the time, and there were plenty of American M20s available.

2. At the end of WWII, the Nazis attached a curved barrel device to the end of an MP-44 rifle. It was known as “Krummlauf,” and it was used to allow soldiers to shoot over obstacles while remaining safe from enemy fire, or to shoot around corners from a safe position. The strange weapon was successfully created, but it only worked in certain circumstances.

The curved barrel was first used in 1943, when a 20-millimeter barrel was attached to an eight-millimeter rifle. The Krummlauf was created in several variations with varying degrees of curvature: 30, 45, and 60 degrees. One was literally bent perpendicular to the other.

The one with the 90-degree bend was designed to be used for mounting armored vehicles. It was assumed that the rifle would be pushed through a port, allowing the user to swivel the rifle around the inside and shoot in any direction.

The device was tested after the war. The bullets were discovered to split in half at the cannelure, the cylindrical part of the bullet. As a result, the rifle was only suitable for close combat, and the Nazis designed it specifically for that purpose.

3. Bat bombs were timed, incendiary bombs designed in the United States and attached to hibernating bats. The bats were to be released at dawn and placed in nearby attics within a 40-mile radius. The incendiaries eventually ignited and caused a fire in the Japanese cities’ wood and paper constructions, resulting in explosions, widespread fire, destruction, and havoc.

The strength of flight of the bat impressed American dentist Lytle S. Adams, who came up with the idea of creating bat bombs. He managed to pitch his idea to President Roosevelt, who agreed to give him a chance.

The majority of Japanese construction at the time was made of wood, paper, and bamboo. The plan was to attach a bat to a timed incendiary bomb and drop it at sunrise. The bats were expected to roost beneath the eaves of the Japanese buildings, where the bombs would eventually detonate.

The working group was initially tasked with locating a suitable species of bat for the project. Mexican long-tailed bats were chosen after a thorough search. After receiving permission from the National Park Service, thousands of these were captured using nets.

Napalm, a highly flammable liquid, was stored in a capsule and adhered to the bats with adhesive. Every explosive device was programmed to detonate in 30 minutes.

In 1943, the project was turned over to the Marines and renamed “Project X-Ray.” Fake Japanese cities were also built in Utah, and bat bombs were tested on them.

However, just as the bat bombs were about to go into action, they were put on hold by senior officials due to another secret weapon known as the atomic bomb.

4. Archimedes’ Claw was an ancient anti-ship weapon developed by Archimedes to defend the sea-facing city walls of Syracuse. According to sources, it was a crane-equipped weapon with a grappling hook that allowed the user to lift and drop the attacker’s ship by the prow. Its strikes frequently caused the victim ship to capsize or sustain severe damage.

This strange defending weapon is said to have been used during the Second Punic War in 214 BCE. It was when the Roman Republic launched an attack on Syracuse with 60 ships led by Marcus Marcellus.

The Romans attempted to infiltrate the city with the fleet at night, but they met with fatal consequences. As soon as the fleet approached the city wall, it began to sink, leaving the Romans befuddled.

Researchers tested the weapon’s plausibility twice in modern times. It was first tested in the BBC series Secrets of the Ancients in 1999, and then in the Discovery Channel Series Superweapons of the Ancient World in 2005.

Both times, the research was successful because they were able to tip over and sink a model of a Roman ship.

5. Blue Peacock was a British nuclear mine built in the 1950s that was stocked with chickens, food, and water. The scientists were concerned that the electronics inside the weapon would freeze before use, so the heat from chickens was expected to keep the electronics operational. The mine was to be detonated three miles away by a timer or a wire. It was never put to use.

Operation Blue Peacock was to be based in West Germany and was aimed at Soviet troops who were rumored to be infiltrating the rest of Europe.

The weapon had a significant flaw. Because it was to be buried underground and detonated at an unknown future time, the wait could cause the mine to freeze. And if it does get cold, the detonator will be unable to detonate a nuclear explosion.

Share
Facebook
Twitter
Pinterest
WhatsApp
Previous articleThese Are 05 Of The Weirdest Animals Found in The Deep Sea
Next articleThe Woman with the World’s Longest Name Has a Birth Certificate with 1,019 Letters
Advertisements
RELATED ARTICLES
History