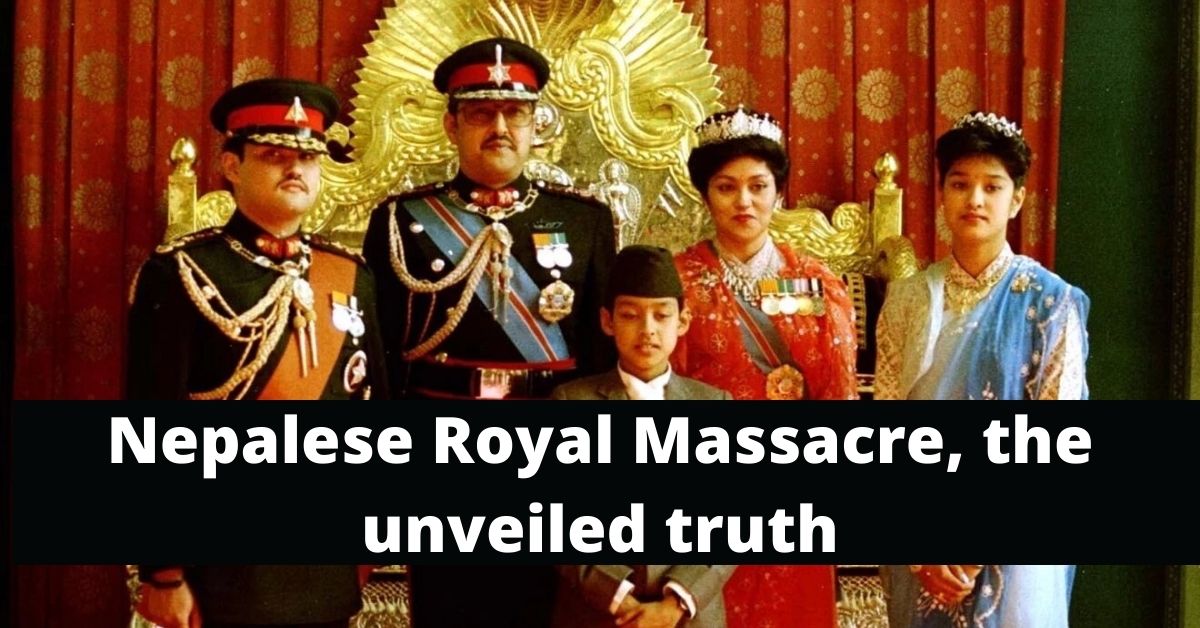 The Nepalese royal massacre occurred on June 1, 2001, in the Narayanhiti Palace, the Nepalese monarchy’s then-residence. During a royal family gathering at the palace, nine members of the royal family, including King Birendra and Queen Aishwarya, were gunned down. A government-appointed investigating team implicated Crown Prince Dipendra as the culprit of the massacre. After shooting himself, Dipendra fell into a coma. Following King Birendra’s death, he was declared king of Nepal while comatose. He died in a hospital three days after the massacre, never regaining consciousness. Gyanendra, Birendra’s brother, then ascended to the throne.

A two-man committee led by Chief Justice Keshav Prasad Upadhyaya and the Speaker of the House of Representatives concluded that on June 1, 2001, Crown Prince Dipendra began firing on a party held at the Narayanhity Palace, the residence of the Nepalese monarchy, at a house on the grounds of Narayanhity. Prior to turning the gun on himself, he assassinated his father, King Birendra, his mother, Queen Aishwarya, and seven other members of the royal family, including his two younger siblings. Dipendra assumed the throne while in a comatose state because he had wiped away most of the line of succession.

There are a number of speculations about Dipendra’s motivation for the murders, but no one knows for sure. When Dipendra returned from the UK, he decided to marry Devyani Rana, whom he had previously met in England. Some say the royal family protested because her mother’s family were lower-class royals of India and because her father had political links.

In fact, the Gwalior line of Devyani was reputed to be one of India’s wealthiest previous royal dynasties, even exceeding the opulence of the Nepalese sultans. The mother of the bride-to-be warned her daughter that marrying the Nepalese crown prince might lower her financial situation. The Juddha Shamsher line was chosen as Dipendra’s bride by the royal family as a challenger to the Rana clan.

Another hypothesis claims that if Dipendra married Devyani, there would be a greater chance of Indian influence in the palace. Other explanations claim that Dipendra was dissatisfied with the country’s transition from an absolute monarchy to a constitutional monarchy after the 1990 People’s Movement. Despite what you might think, this is quite unlikely. The crown prince was a student at Eton College, where he was completing his studies, when the 1990 revolt occurred and he returned to an elected government.

After the revolution of 2006, many questions remained unanswered about the massacre’s circumstances, and many of those concerns remained unanswered until today. There are still unanswered questions about the event’s apparent lack of security, the absence of Prince Gyanendra, Dipendra’s uncle and the heir apparent, the location of Dipendra’s self-inflicted head wound on his left temple despite the fact that he is right-handed, and the investigation’s brief duration and lack of major forensic analysis despite an offer from Scotland Yard.

Additionally, Princess Shova, the brother-in-law of King Birendra, Prince Gyanendra’s wife, Princess Shruti, the future and last queen of Nepal, and Princess Komal, the prince’s wife, were all injured in the incident. Ketaki Chester, King Birendra’s first cousin and the middle sister of Princess Jayanti, had renounced her title prior to the incident.

The Royal Family was cremated the following day. King Dipendra, who had been declared comatose at the time, passed away on June 4th, 2001. After Dipendra’s death, Gyanendra was named regent for a period of three days before ascending to the throne. He claimed that the murders were the result of an “automatic weapon discharge” in the royal palace when Dipendra was unconscious. Due to “legal and constitutional hurdles,” Dipendra could not have been charged with murder even if he had survived, he later explained.Dipendra was found guilty of the murder after a thorough investigation.

For a week, Chief Justice Keshav Prasad Upadhaya and the Speaker of the House, Taranath Ranabhat, investigated the slaughter. One hundred and fifty witnesses, palace officials, and guards were interviewed during the course of the investigation. It was determined that Dipendra was responsible for the shooting. However, Dipendra’s malfeasance in the incident was disputed by observers both in Nepal as well as abroad. The Maoist insurgency had already thrown the country into chaos, and now this. During Gyanendra’s reign, the monarchy lost much of the public’s support. Some say the demise of Nepal’s monarchy may have been precipitated by this atrocity.

People in Nepal adored and revered King Birendra and his son Dipendra, who succeeded him as king. He was in Pokhara on the day of the massacre while the other royals were attending a banquet. The assassination took place in the royal palace room where his wife and three children were. Unlike Birendra and Dipendra, whose entire families perished, no one in Gyanendra’s household was harmed; his son was just slightly hurt, and his wife was wounded but survived a life-threatening bullet wound. Conspiracy theories were born out of this.

Maoist leader Pushpa Kamal Dahal (Prachanda) alleged in front of a large crowd that the slaughter was orchestrated by either India’s Research and Analysis Wing (RAW) or the CIA in the United States of America (CIA). Several eyewitness claims have been made public since the tragedy, including the claim that “Crown Prince Dipendra’s mask was worn by multiple people in the room at one point.” Dipendra was cited as one of the first to have been shot while the bodies of other members of the Royal Family were recovered elsewhere in the palace, not in the dining hall.

The book “Raktakunda” is based on interviews with two maids from the palace, and it outlines these ideas. Proponents of this theory claim that Gyanendra was involved in the massacre in order to gain control of the monarchy for himself. Only by removing his nephews, Dipendra and Nirajan, from the royal line could he ascend to the throne. Gyanendra and his son, Prince Paras, were also not well liked by the people.

In the Nepalese media, there have been claims that the perpetrator was not Dipendra but rather a person who wore a mask to impersonate himself as Dipendra. Also, that Paras broke and disposed of Dipendra’s ventilator in the hospital. There were also other claims that 900 people were killed in the palace that night and the curfews were implemented to allow the disposal of their bodies, and that the public water supply and milk in Kathmandu had been poisoned, among others. Another theory is that Dr. Upendra Devkota, Ketaki Chester, or the Nepalese army were responsible for the massacre. These statements, however, have been shown to be devoid of any supporting evidence.