HomeGeneralInside and out of the Royal Park Murder
General

Inside and out of the Royal Park Murder 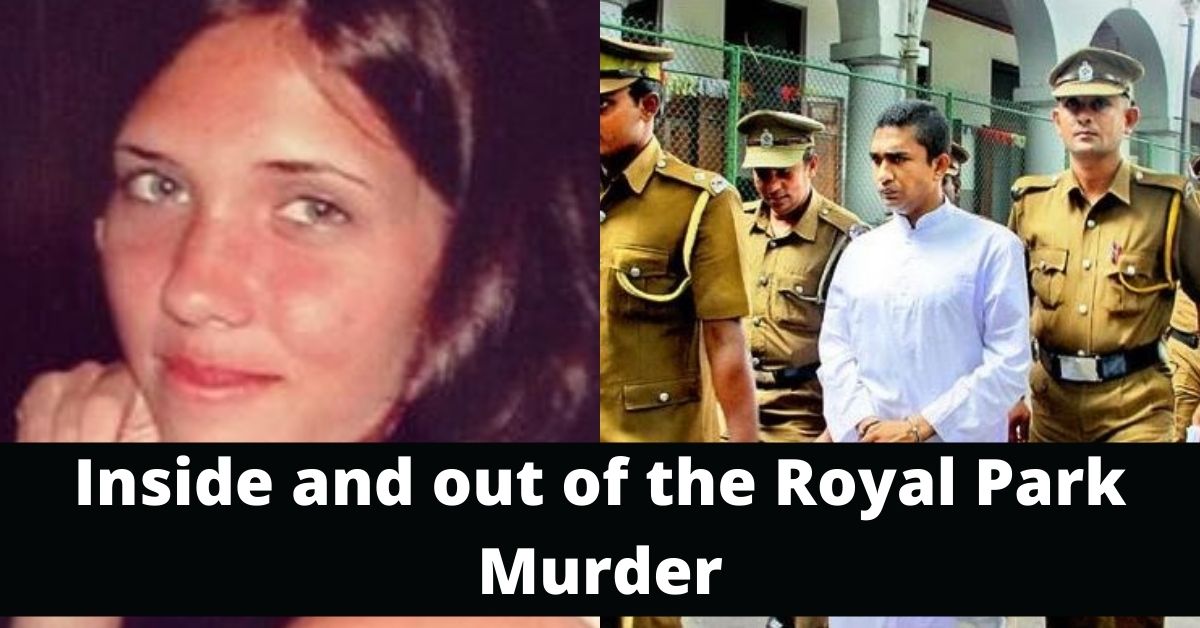 In this article, you’ll get to know the inside and out of the Royal Park Murder, the brutal death of Yvonne Annette Jonsson.

In 2005, Sri Lanka was gripped by the Royal Park Murder. On June 30, 2005, a high-profile murder occurred at the Royal Park luxury apartment complex in Rajagiriya, Sri Lanka. The 19th floor of the building was the scene of Yvonne Jonsson’s brutal murder.

Any human being would find Yvonne’s crime scene upsetting at the very least. Her face had been mutilated to the point where it was nearly impossible to identify her. Her head had been repeatedly bashed against the wall as she lay in a pool of blood. In total, 64 pieces of the skull were found. Her face was smashed against the concrete as she lay motionless. Using her black stockings, she was strangled. It was a heinous crime. Before we further dig in, let’s get familiar with the background.

The background of the incident

Swedish national Roger Jonsson arrived on the island in 1975 as a tourist. Chamalka, a Sri Lankan woman, was the bride he chose. Piliyandala and Horana BOI rubber manufacturing companies in Sri Lanka has been under his management since 1990. Yvonne and Caroline, the couple’s beautiful daughters, were born to them. The Jonsson sisters had a high-class existence in the opulent Royal Park complex, where they lived and went to school at Colombo International School.

Yvonne Jonsson, the 19-year-old elder of the Jonssons, left for the United States in December 2004 to pursue a course in fashion design, while Caroline Jonsson, the 17-year-old younger sister, remained at CIS. When Caroline started dating Shramantha Jayamaha in February 2005, she had known him since the age of 11. When Caroline finally accepted Shramantha’s proposal in February 2005, it was a long time in the making. Her sister, Yvonne, was opposed to the relationship and begged Caroline to break up with Shramantha, a privileged young man who was addicted to alcohol and recreational drugs. Yvonne even informed their mother of the situation.

From one club to another, Colombo’s most affluent children, including those of the Jonssons and Jayamahas, would drink and take drugs until dawn as entertainment. While vacationing in Sri Lanka, Yvonne and her sister decided to go clubbing in Colombo. At 8.30 p.m., Yvonne decided to make one last drive in their father’s blue jeep. Caroline’s boyfriend, Shramantha, was waiting for them at Bagatale Road in Colombo 3. To save Caroline’s life, Yvonne made an effort to reconcile with Shramantha on an equal footing.

After meeting four friends at the “White Horse” in Navam Mawatha, they decided to go to the “Glow” in Galle Face and then to the “Blue Elephant” at the Hilton for a night of dancing and drinking. Since the crowd was getting on their nerves, they made the decision to go back to the “Glow.” In the “Blue Elephant,” they only stayed for about 10 minutes because of a disagreement between Caroline and her boyfriend, Shramantha, over a boy’s “waving” toward Caroline. Yvonne stepped in to mediate because Shramantha was inebriated, and she accused Shramantha of making her younger sister cry.

As a result of her bereavement, Caroline decided to ride in a cab with her boyfriend, Shramantha, from the Hilton to the Royal Park complex. They arrived at the complex around 2:00 am, when the gates were still closed to the public. She decided to stay and party with a family friend, but she returned to the “Glow” and headed back home after her friend went to Taj. Yvonne was said to have returned to the complex around 2.45 a.m. The Jonssons’ lives were turned upside down at that point.

With the noise and confusion outside, Caroline took the chance to sleep in and asked Yvonne to wake her when she returned home. Every morning, their mother would wake Yvonne up so she could take the young girl to school. When Yvonne didn’t return, she tried to contact both Shramantha and an old family friend, but no one could assist her in her time of need. It was around 9.30 a.m. when Chamalka and her daughter returned back to the complex, where they were met by a police car.She was called and informed by an old friend that her daughter had been killed in the same building where she was.

During the course of the day, Caroline’s boyfriend informed her that he was going out with his father to an estate and that he would not be available to her (Friday). Shramantha and his mother arrived at Yvonne’s funeral on July 2, 2005, to pay their respects. He was then taken into the custody of the CID to be interrogated there and then.

In the CID’s opinion, the suspect waited for Yvonne to return to the apartment before committing the crime. When she arrived, an argument may have broken out between them, resulting in a fight on the stairs. The first evidence of a scuffle was found on the 22nd floor, where Yvonne’s sunglasses’ price tag had probably fallen out of her bag. All of the victim’s jewelry and other things were found in the stairwells that led to the 21st and 20th floors, respectively. Yvonne’s mutilated body was found at the foot of the staircase on the 19th floor, where detectives believed the argument had continued from the 23rd floor. According to the results of the investigations, her own stockings were used to strangle her to death. He allegedly contacted a friend, Mohamed Rilvan, before fleeing the scene of the crime.

The scene of Yvonne’s murder was too gruesome to recreate. Her skull was fractured, and her face was covered in blood, making it impossible to tell who she was. This conflict could only have been resolved by a person devoid of compassion.

As a result of this incident, many people then held a negative view of international school students and placed the blame squarely on the school’s culture of entitlement and complacency.

On July 28, 2006, the Colombo High Court sentenced Shramantha Jayamaha to 12 years in prison for the murder of Yvonne Jonsson after a year-long trial. Shramantha was found guilty of culpable homicide, which isn’t the same as murder, and so he didn’t get the death sentence. After the verdict was read, the Jonsson family burst into tears. As far as they were concerned, the 12-year sentence was much too light for a person who had committed a heinous crime. For the sake of justice for Yvonne, they decided to re-apply.

However, after Chandradasa’s execution on June 23rd, 1976, the death penalty was abolished, and all subsequent death row inmates were sentenced to life in prison.

One of the reasons the Jonsson family decided to leave the country permanently was that Shramantha Jude Jayamaha was the son of a wealthy businessman in Colombo. President Sirisena’s order to execute at least one person before stepping down as Sri Lanka’s leader was to be carried out. He also stated that he would reinstate the death penalty for drug convicts. Following the signing of four death warrants in June 2019, he drew worldwide condemnation, including from the European Union (EU), which deemed capital punishment a “cruel and degrading punishment.”

According to President Sirisena, the murder of Jude Shramantha Jayamaha was motivated by a lack of patience, and he requested a presidential pardon for Jayamaha in October. Based on a thorough investigation, it is debatable whether this murder was committed because of a lack of patience. An outburst from Shramantha after a verbal exchange would have been one thing; however, given the brutal treatment Yvonne endured—including being suffocated with her own stockings and having her head bashed repeatedly against the wall—the former President’s claim is without merit. Despite the outcry, the pardon was carried out as scheduled on 09/11/2019.