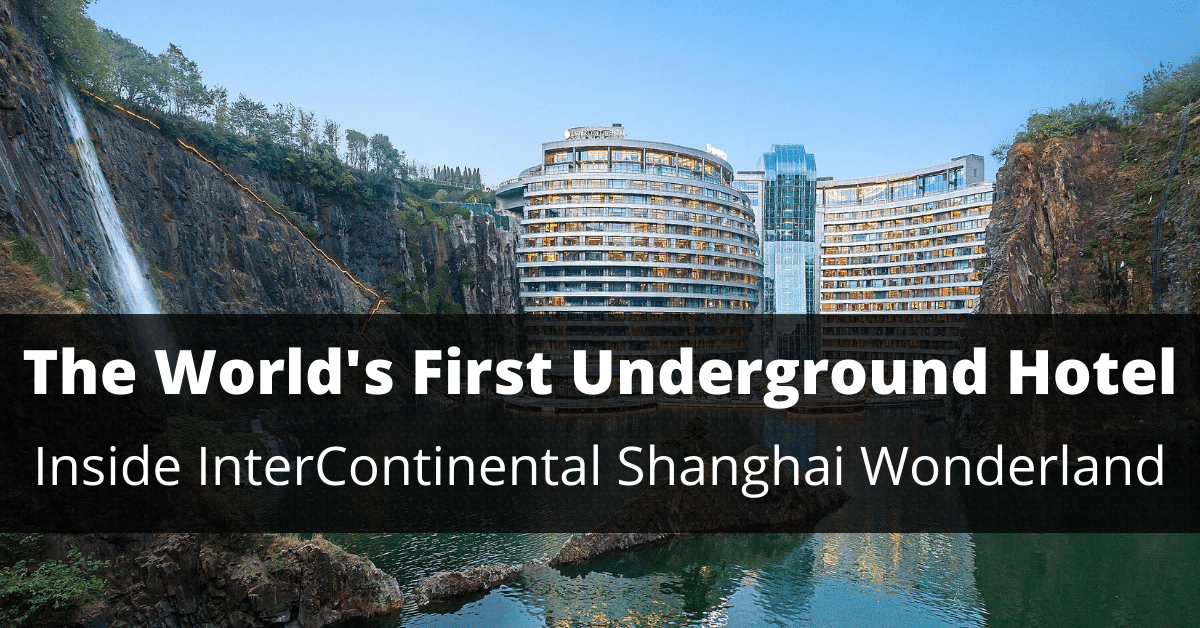 A long-abandoned former quarry in one of Shanghai’s outskirts does not appear to be a promising location for a new resort. But, after more than a dozen years and $300 million, the InterContinental Shanghai Wonderland is truly spectacular. JADE+QA Architects’ 18-story resort hugs the rock face in a harmonious yin and yang design, reimagining the relationship between city and nature.

Sixteen of the 18 floors are underground, and two are underwater. Six underwater suites each have their own saltwater aquarium, and each room has a balcony with a cozy theater box from which to watch the nightly water show. The light and water theatrics are mesmerizing, far outperforming the Bellagio’s water show in Las Vegas. Guests can even personalize the light show for special occasions such as weddings or proposals.

“It was a challenge,” says Martin Jochman, the hotel’s chief architect. “This quarry was essentially a scar on the earth’s surface.” It was overgrown and potentially dangerous.” It was up to him to transform the unusual site into something beautiful, and the inventive engineering team came up with 41 registered patents along the way to solve various engineering challenges.

“We took some big risks because it was completely unknown,” says Jochman. “The hotel emerges from nature.” I’ve never seen anything like the glass waterfall, cascading cliffs, and convex and concave wings. Guests can kayak around the quarry, which has been filled with water, or climb the 88-meter-high cliff face. At the nearby theme park, you can even zipline across the quarry. The helicopter pad at the resort is right in the middle, so you’ll undoubtedly be the center of attention when you land.

“The intention was to create a place that would become a refuge, a tranquil, luxurious fantasy world away from the hustle and bustle of Shanghai,” Jochman says. The hotel is located in the Songjiang district, which is an hour west of Shanghai’s financial district. Jochman describes his design philosophy as sensitive design, which takes into account how to improve the environment while building a long-lasting structure. “Sustainability was built into the design without any costly add-ons,” he explains. The hotel’s location, for example, maximizes sunlight while minimizing the effects of the chilling north winds.

The intimate An Spa is the place to go for peace and quiet. In four treatment rooms, a gentle Japanese skincare line is used to buff and hydrate the skin. The InterContinental Club lounge is on the same floor, and the steampunk Quarry Bar is one floor below. The outside booths here have the best views of the water show in the house. Mr. Fisher, the hotel’s specialty seafood restaurant, is located underwater and is surrounded by a saltwater aquarium, while Cai Feng Lou, located upstairs, serves Chinese delicacies.

There are many old quarry pockmarks in Shanghai’s suburbs, and the Chinese government has encouraged their revitalization over the last few decades. Other nearby quarries have been converted into national parks or golf courses, but InterContinental Shanghai Wonderland is the most ambitious project with the most impressive results.

The design concept is an adventure to the center of the earth, fully embracing the mining quarry theme with a lobby wall that resembles a cliff face and rooms named after precious stones, despite the fact that no precious stones were ever mined here from 1902 to the 1950s, only andesite rock.

The guestrooms are decorated with a lot of wood and stone in warm natural tones, and they have floor-to-ceiling windows. As a nod to the mining history, some guest rooms have asteroid-like stones protruding from the headboard. There are heated Toto toilets and an open concept bathroom that flows directly into the bedroom, where Baidu’s digital assistant (the Chinese version of Alexa) is waiting to meet your every need if you speak Mandarin. The vast majority of visitors are from the mainland, and hotel management anticipates a lot of group business.

In China, the InterContinental brand is definitely gaining traction. In 2018, IHG opened eight InterContinental hotels in China, and InterContinental Shanghai Wonderland was the brand’s 200th hotel worldwide, a milestone marked by a vibrant champagne bottle art installation by Alexander Hall. In the next five years, InterContinental plans to open 60 new hotels around the world.