HomeGeneral20 Junks That Turned Out To Be Priceless
GeneralHistory

20 Junks That Turned Out To Be Priceless 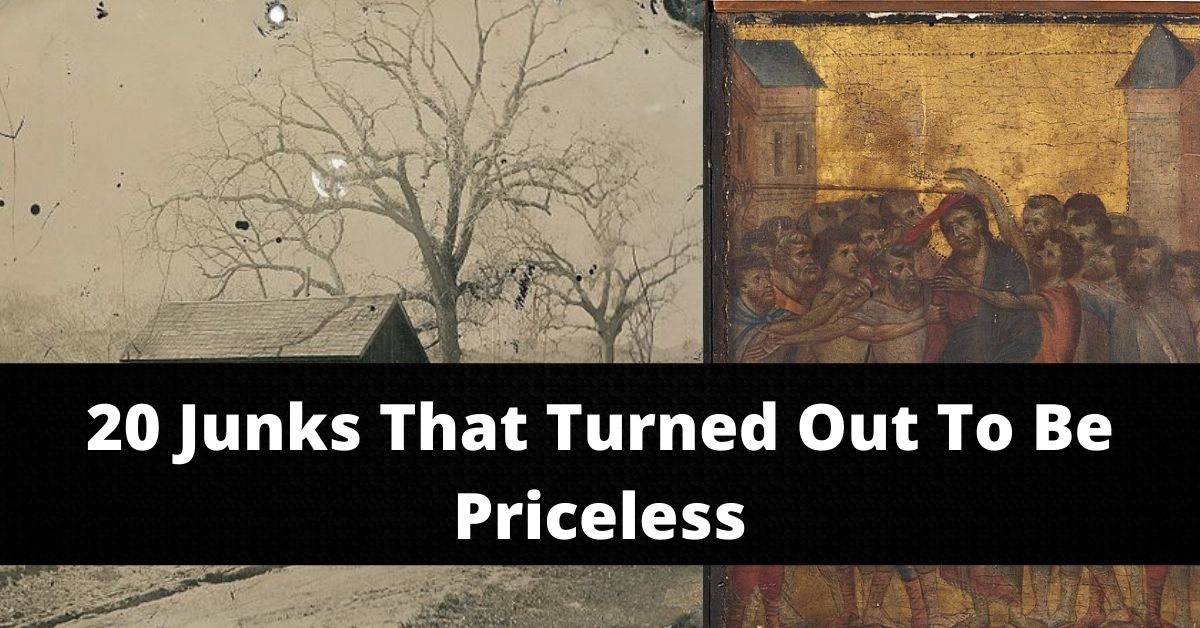 In 2015, the second known picture of Billy the Kid was worth $5 million. The most interesting thing about this picture isn’t how much money it will make at auction, but how much it cost to make in the first place. People who bought the photo say that he spent just $2 on a lot of junk and found the photo in a pile of dust.

When you hear a story like that, you start to look around and wonder if there are any other pieces of junk that turned out to be valuable. On this list, you’ll find all kinds of weird things, from jewelry hidden in junk drawers to pieces of American history hidden inside picture frames. Make sure you have your digging gloves on and check out this list of things that were worth a lot of money.

Every weekend, people go to flea markets, swap meets, and estate sales in search of the next big find. People who know what to look for can get a lot of money from old comics that have been sold outside.

When an elderly woman in Compiègne, France, decided to sell her home, her family sought the advice of an expert to determine the value of her belongings. Before the majority of the furnishings were taken to the dump, auctioneer Philomène Wolf had a week to see if anything was worth saving. Wolf told The Guardian that the most valuable item she noticed as soon as she walked in the door: a rare 13th-century masterpiece hanging over the kitchen hot plate.

“It’s rare to come across something of this caliber, “she clarified “I assumed it was a work of Italian primitivism right away. “However, I didn’t think it was a Cimabue.”

What the homeowner and her family thought was just a “old religious icon from Russia” turned out to be one of only 11 paintings on wood by Cimabue, or Cenni di Pepo, a Florentine artist. The owner of the house where the painting was discovered said she couldn’t remember when or where it first came into her possession because she’d had it for so long. “Christ Mocked,” a 20cm by 24cm painting, according to Wolf, could be worth $330,000 to $440,000. It was estimated to be worth between $4 million and $6.6 million.

The painting is thought to be part of a diptych depicting Jesus Christ’s passion and crucifixion, which was created around 1280. Two of these scenes are currently on display at the Frick Collection in New York and the National Gallery in London. The scene featured in the National Gallery (“The Virgin and Child with Two Angels”) was also discovered in a private home, where it had hung for years without anyone realizing its value, as was the case with “Christ Mocked.”

A Porcelain Bowl At A Yard Sale Turned Out To Be A Rare 15th-Century Chinese Dish Worth More Than $700,000

A $35 blue-and-white floral porcelain bowl purchased at a Connecticut yard sale in 2020 piqued the interest of an antiques buyer who thought it might be more than a common household dish. The buyer learned it was a rare Chinese bowl from the 1400s made for the Yongle Emperor’s court after contacting Sotheby’s.

The bowl, which measures 6.25 inches in diameter and is delicately potted in the shape of a lotus bud (lianzi) or chicken heart (jixin), is one of only seven such bowls known to exist, according to the Sotheby’s listing. “The Yongle court (1403-1424) introduced a very distinctive new style to the porcelain kilns of Jingdezhen in Jiangxi, a style that was instantly recognizable, never surpassed, and continues to define the craft in the 18th century,” according to the listing.

The other six bowls are mostly in museums outside of the United States; no one knows how the seventh ended up at a Connecticut yard sale.

A Doorstop Turned Out To Be A Meteorite Worth $100K

At his farm in Edmore, MI, a man used a 22.5-pound hunk of iron as a doorstop. The original owner told him the large specimen was a meteorite from the 1930s when he bought the farm in 1988. In 2018, the man asked Central Michigan University geology professor Mona Sirbescu to examine the rock, and Sirbescu confirmed that it was indeed a meteorite.

“According to the story, it was collected right after they heard the big boom, and the actual meteorite was dug out of a crater,” Sirbescu told USA Today. She went on to say that the legend had been passed down orally without any eyewitness confirmation.

The meteorite is Michigan’s sixth-largest find. The specimen was given the name “Edmore” by Sirbescu and the Smithsonian.

A local fisherman in Puerto Princesa City, Philippines, walked into the local tourism office on August 22, 2016, with a giant pearl he’d been keeping under his bed as a good luck charm. The man discovered the pearl off the coast of Palawan Island ten years before shocking local officials with it. His anchor became tangled in what he mistook for a rock, but turned out to be a 2-foot-long pearl.

A Photo Of Billy The Kid Could Be Worth $5 Million

It was the biggest story in the world of found photos since, well, ever. In October 2015, it was reported that a photograph taken in 1878 could be worth up to $5 million. The photo was purchased for $2 at an antique shop in Freemont, California, by a man who had no idea that it depicted Billy the Kid and members of the Lincoln County Regulators playing croquet.

It’s only the second photo of the notorious 19th-century thief that has been confirmed.

After an antiques dealer spent nine months appraising the item, which had been left in a cupboard for nearly a decade, a small painting by John Constable (an English Romantic painter) that was bought at an auction for 30 pounds turned out to be worth $400,000.

A $5 Andy Warhol Sketch Could Be Worth $2 Million

A man bought a few drawings for $5 at a garage sale in Las Vegas in 2012, but one of the sketches turned out to be worth much more. He discovered Andy Warhol’s signature while reframing the photos and had the drawing appraised.

The sketch is estimated to be worth around $2 million.

The workers at Goodwill discovered an Apple 1 computer worth $200,000 after she dropped off a computer she thought was junk without leaving her name.

They’ve offered the mystery woman half of the money, but she has yet to respond.

Thea Jourdan purchased a brooch for £20 in a secondhand shop in 2011. When she went to get a ring appraised, the appraiser noticed the brooch and told her it was worth closer to £4,000 than she thought.

What she initially mistook for glass turned out to be a nearly flawless pink topaz stone encrusted with 27 diamonds.

Following some investigation, he discovered that many of the vintage doorknobs and brass handles in the stash were worth at least £2 million.

A caretaker discovered a paper bag full of $400,000 in cash in an apartment above an old deli, making it worth more than $50 million in today’s dollars.

A woman in West Virginia claims to have discovered a masterpiece by Renoir in a $7 box of random junk at a flea market. She claimed she bought the painting for the frame at first, but after having it appraised, she discovered she had a $100,000 painting.

At least, that’s how the story goes; later evidence suggests the painting was stolen from the Baltimore Museum of Art in the 1950s. In 2014, it was returned.

The value of a woman’s jewelry collection nearly doubled.

In 1998, Antiques Roadshow appraised a box of jewels that a woman had inherited, and the experts discovered that she had a $12,000 dual-diamond pendant, a $80,000 diamond and ruby ring, and a $165,000 diamond bracelet accented with rubies.

A Woman’s Inherited Baseball Cards Were Worth $1 Million

Her great-great-grandmother, who ran a Boston boarding house where the Boston Red Stockings lived in 1871-1872, left her a $1 million collection of baseball cards. The “crown jewel” of the collection, according to the appraiser, is a May 1871 letter to a Boston landlady that contains notes from three future Hall of Fame members: Albert Spalding, the future sporting goods magnate, and brothers Harry and George Wright.

A man discovered a violin in the trash in 2013 and decided to have it appraised. The violin, by chance, was made by Giuseppe Pedrazzini, one of the most famous Italian violin makers of all time. “After it’s cleaned up and put in good condition,” the appraiser said, “it would have a value of around $50,000.”

If you didn’t know, the Declaration of Independence was printed in 500 copies in 1776, and only 23 copies were known to still exist in 1989. A Philadelphia financial analyst paid $4 for an old painting at a flea market that year because he liked the frame. He discovered a folded document that appeared to be an old copy of the Declaration of Independence between the canvas and its wood backing after the frame broke.