5 MYSTERIES FROM THE PAST THAT WERE SOLVED IN RECENT TIMES 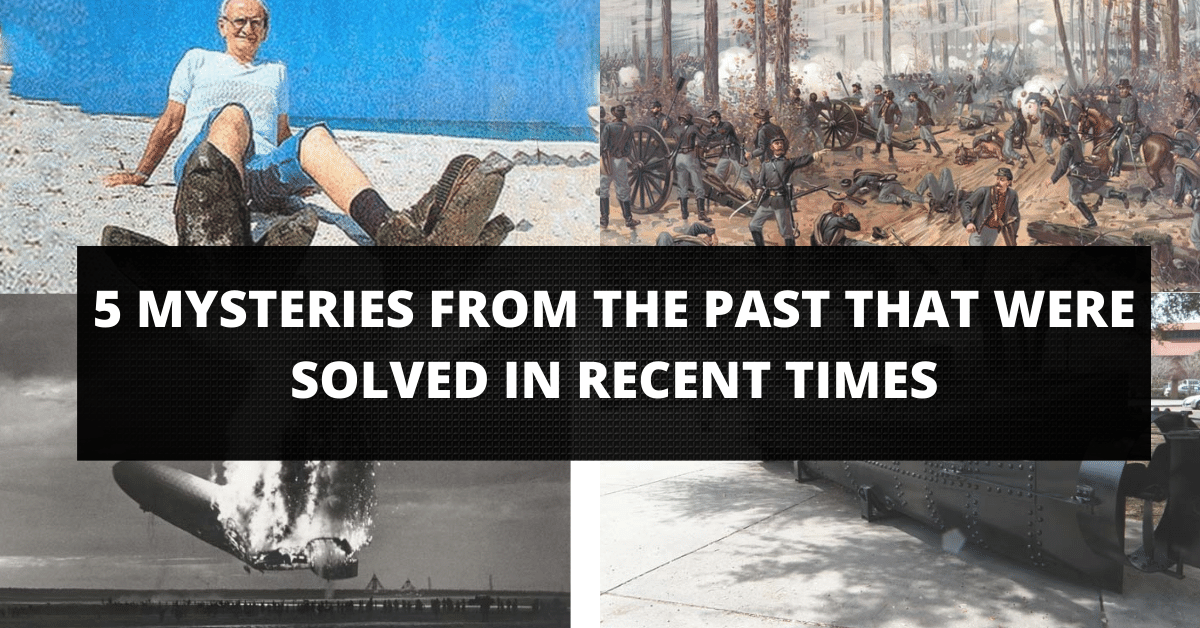 History frequently leaves unresolved mysteries that are later overshadowed by other, larger events. As a result, the mysteries persisted. Over time, a researcher or a group will pick up a mystery and delve deeper, leading to highly interesting observations and rational explanations. Here are five strange historical mysteries that have recently been solved:

1. On May 6, 1937, the German passenger airship LZ 129 Hindenburg caught fire during a docking attempt, killing 35 people on board. Investigations yielded no conclusive results, leaving room for conspiracy theories. Seventy-six years later, a team of researchers set fire to scale models of the Hindenburg and concluded that hydrogen leaking from a valve was ignited by a thunderstorm’s static charge.

A team of researchers from the South West Research Institute in the United States set fire to a series of 80-foot-long scale models of the German airship LZ 129 Hindenburg in 2013. It was an attempt to solve the 76-year-old mystery of the Hindenburg explosion.

On May 6, 1937, the 800-foot-long LZ 129 Hindenburg exploded in flames while docking at the Naval Air Station Lakehurst after flying through a thunderstorm. Although many photographers and four cameramen captured the landing, no footage of the moment the fire started exists.

While eyewitnesses provided details such as the fluttering of the fabric (indicating a gas leak) ahead of the upper fin and flames in the shape of a mushroom in front of the upper fin, these reports did not help investigators reach a definite conclusion, leaving much to speculation and conspiracy theories. Then, 76 years later, aeronautical engineer Jem Stansfield and his team of researchers set out to figure out what caused the fire that killed 35 of the 97 people onboard.

The team used a variety of methods to set fire to a series of scale models in order to determine the cause. The study concluded that the airship became charged with static electricity while maneuvering through the thunderstorm. Groundworkers holding the rope while docking created an earthing for the charge, resulting in a spark. This ignited the leaking hydrogen. The fire quickly spread throughout the ship, causing it to crash tail-first into the ground.

2. Some soldiers were discovered with wounds that emitted a faint blue glow during the Battle of Shiloh in 1862. Medics discovered that soldiers with blue wounds were more likely to survive, so they named it “Angel’s Glow.” Then, in 2001, Bill Martin, a 17-year-old Civil War buff, and a friend became interested in the case. They discovered that Angel’s Glow was caused by a soil bacterium known as Photorhabdus luminescens.

On April 6 and 7, 1862, the Battle of Shiloh took place. Many soldiers had to wait up to two days after the battle for medics to arrive and treat them in the field hospital. The medics noticed that some soldiers who had a pale blue light emitting from their wounds were recovering much faster and had a higher chance of survival. This life-saving glow was dubbed “Angel’s Glow.”

Almost 140 years later, in 2001, Bill Martin and a friend visited the site and became involved in the case thanks to Bill’s mother, a microbiologist. What was thought to be an Angelic intervention was actually caused by a soil bacterium called Photorhabdus luminescens or P. luminescens, which lives inside nematodes, parasitic worms that burrow into larvae’s blood vessels. Once they’ve found a suitable host, the nematodes vomit up the bacteria, releasing a chemical that kills the host, as well as the surrounding microorganisms and pathogens, and causes the pale Angel’s Glow.

It’s worth noting that these bacteria cannot survive in normal human body temperatures, but because the soldiers had been in rainy, muddy lands for extended periods of time, their body temperature had dropped dramatically.

3. Carl Bernstein and Bob Woodward investigated and exposed the Watergate scandal. The key piece of information came from a secret informant known as “Deep Throat,” whose identity remained unknown for over 30 years. Among the suspects were George W. Bush, Mark Felt, and Nixon himself. It wasn’t until 2005 that Mark Felt was identified as the infamous anonymous informant.

President Richard Nixon resigned from office in 1974, making him the only president in American history to do so. A confidential insider played a critical role in providing critical information to Washington Post reporters Carl Bernstein and Bob Woodward for their book All the President’s Men.

Before President Nixon’s resignation, the reporters had been investigating the Watergate Scandal for two years.

Many candidates were suspected of being the “Deep Throat” secret informant, including Mark Felt, George W. Bush, and Richard Nixon himself.

The fact that Bob Woodward had close connections to Mark Felt and that Felt was indeed the informant fueled speculation, but each speculation was refuted by Felt, Woodward, and Bernstein.

Only three decades later, in 2005, at the age of 91, did Mark Felt and Bob Woodward confirm that Felt was indeed Deep Throat, putting an end to one of the most famous mysteries in American history.

4. Giant three-toed footprints of a mysterious creature were discovered on Florida beaches between 1948 and 1958. A few witnesses, including an investigating zoologist, claimed to have seen the 12-foot-long creature, which was thought to be a giant penguin. After Forty years, Tom Siginorini revealed that he and his boss had planted the iron-footed footprints as a joke.

Beachgoers in the sleepy village of Clearwater, Florida, discovered strange footprints in the sand in February 1948. The three-toed prints measured 14 inches long by 11 inches wide and were spaced four to six feet apart. The enormous creature appeared to emerge from the water and walk for two miles before returning to the waves.

Every beach, from Honeymoon Island to St. Pete Beach, was marked with mysterious tracks.

The public reacted to the news with either skepticism or panic. NBC and the New York Herald-Tribune tasked Ivan Sanderson, a zoologist on the rise, with investigating the matter.

Sanderson came to the conclusion that the prints were too deep to have been pressed by either a machine or a human. He mistook the footprints for those of a massive penguin. A few witnesses, including Sanderson, claimed to have seen the 12-foot-long creature with large arms.

The tracks reappeared a few more times over the next ten years.

The mystery was finally solved in 1988, when a Times reporter found himself at Tom Signorini’s auto repair shop. Signorini then demonstrated a pair of iron feet with three toes to the reporter.

He admitted that the entire thing was an elaborate prank. Steven Williams, his boss, came up with the plan after seeing a photo of a fossilized dinosaur footprint.

The feet were made of iron and matched the one in the photo. Signorini jumped with one foot planted on the ground to achieve the long stride of six to seven feet. Williams’ friends were among those who claimed to have seen the creature.

5. The H.L. Hunley, a Confederate submarine, mysteriously sank on February 17, 1864, after blasting the Union warship Housatonic with its spar-mounted torpedo. After 150 years, the crew’s fate was discovered during experiments on scale models conducted by researchers at Duke University in Durham. They concluded that the crew was killed instantly by the blast waves of its own weapon.

H.L. Hunley was a Confederate submarine during the American Civil War. The cigar-shaped, self-propelled submarine was outfitted with a spar-mounted torpedo.

The H.L. Hunley attacked the Union warship USS Housatonic on February 17, 1864, by thrusting a torpedo into the warship’s hull. The Union ship was sunk in five minutes by an explosion caused by 135 pounds of black powder, killing five of its crew members.

Shortly after, the H.L. Hunley was also consumed by the water in an unexplained turn of events.

The sunken submarine was discovered in 1955 and was raised to the surface in the year 2000. The discovery of an intact vessel with the skeletal remains of the crew seated at their stations added to the mystery. There was no sign of an escape attempt, and two holes in the hull provided no answers.

Then, using the Navy blast software, researchers at Duke University in Durham, North Carolina, conducted a series of experiments on a 6.5-foot-long scale model of the Hunley.

According to the findings, the crewmembers of the Hunley were exposed to blast waves, which killed them instantly. The torpedo explosion sent blast waves through the vessel, damaging soft tissues in the brain and lungs.

Because the H.L. Hunley was submerged in water and vibrations travel at different speeds through water and air, a combination of the two speeds known as “the hot chocolate effect” proved lethal for the people aboard.