Old photographs of daredevil bikers racing in motorcycle chariots, circa 1920-1930. 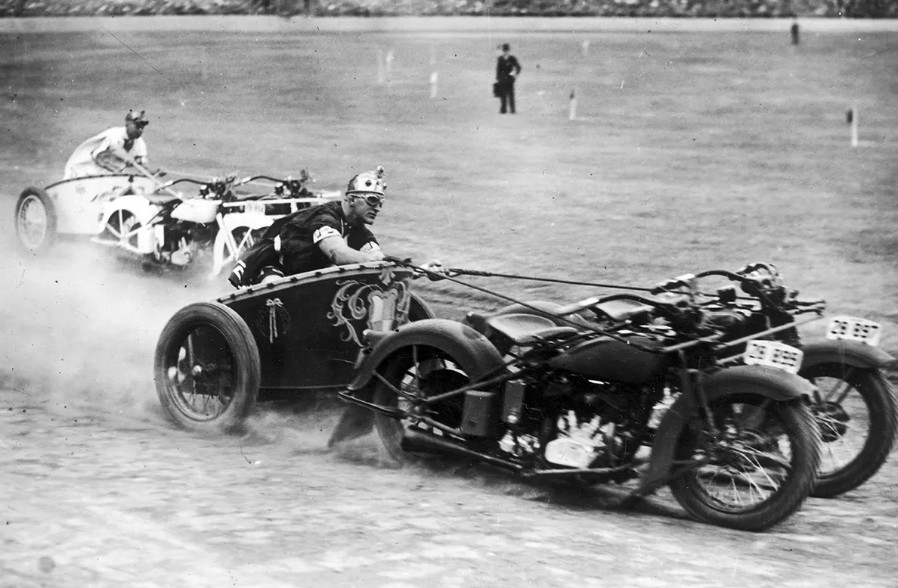 Chariot racing was one of the most popular sports in the ancient Olympic Games, and it was extremely risky for both the drivers and the horses, who often suffered serious damage or even death.

The racing chariots were light and fragile, easily smashed in a collision, and the driver was often entangled in the long reins and dragged to death or seriously injured.

Chariot racing was all but forgotten outside of history books until some daredevils strapped motorbikes to the front of chariots and revived the sport using modern technology in the early 1900s.

People were enthralled by everything about Ben-Hur: A Tale of the Christ after its success in 1925, including the exciting chariot race sequence. With the fans clamoring for more of the same, someone recognized an opportunity to modernize the sport by using motorcycles instead of horses.

A typical early vehicle configuration was a rider on a motorcycle, pulling a chariot and charioteer who were essentially ornamental.

This configuration is described in a 1922 short item in Popular Mechanics. This quickly evolved into a setup with two riderless motorcycles being guided by reins by a single charioteer.

The first photograph was taken at the Sydney Showground in Australia during the 1936 New South Wales Police Carnival. Two police officers were reenacting the iconic scene from Ben-Hur, and their stunt has become the most famous photograph of motorcycle chariot racing in history.

After the 1930s, the sport became largely (but not entirely) extinct, while exhibition rigs are still made and driven.