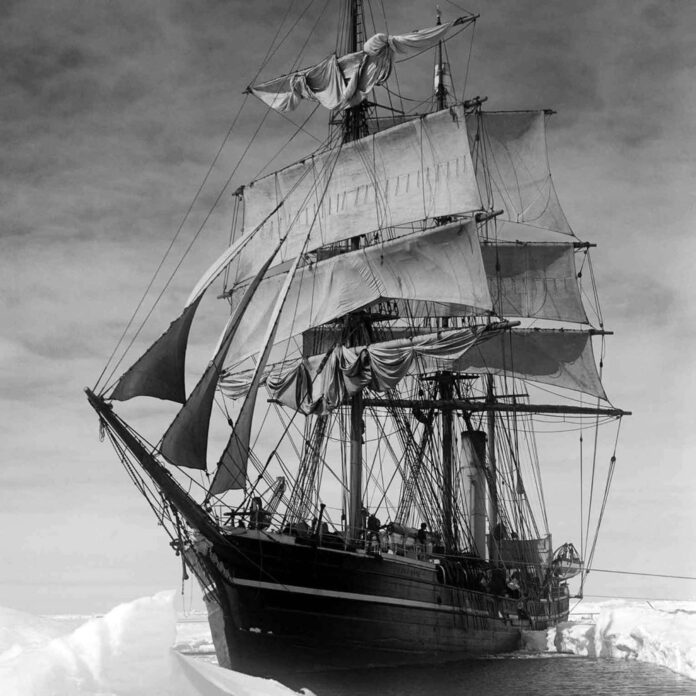 The Terra Nova Expedition, also known as the British Antarctic Expedition, took place in Antarctica between 1910 and 1913. It was led by Robert Falcon Scott and had a variety of scientific and geographical objectives. The Terra Nova is shown above.

Robert Falcon Scott, a British explorer, led a privately funded expedition to the South Pole in 1910, becoming the first to do so.
Scott’s purpose for the expedition was to be the first person to reach the South Pole and to do important scientific research along the coast of Victoria Land on the Ross Ice Shelf.

The scientific work was considered by chief scientist Wilson as the main work of the expedition, though Scott felt that the main objective was to reach the South Pole, and to secure ‘for the British Empire the honor of this achievement’ of reaching the remotest place on earth, and its southernmost point, first.

Scott came back from the last Discovery trip as a hero because he went the farthest south. He also wanted to be the first person to reach the North Pole, no matter what.

The expedition was made up of seamen and scientists, as well as paying guests who could help out with a variety of tasks. Admiral Edward Evans, 1st Baron Mountevans, was Scott’s second-in-command.

Evans received numerous awards and decorations for his work in Antarctica, military service, and lifesaving, including the Most Honourable Order of the Bath in 1913.

The expedition would use the Terra Nova supply ship to lead them on the first portion of their journey. Scott’s trip is known in history as the Terra Nova Expedition, which comes from the name of the ship.

The attempt to reach the world’s most remote spot was brave and ambitious in and of itself, but international rivalries added to the pressure. At the time, Japan, Norway, Germany, Sweden, France, and Belgium were all attempting it. Captain Amundsen, who was from Norway, had almost been the first person to step foot on the North Pole before. This gave him even more motivation to be the first.

Scott’s men arrived in Antarctica in early January 1911. The weather was brutal, with temperatures as low as minus 60 degrees Celsius (-76 degrees F).

First Officer Victor Campbell sailed the Terra Nova east with six men, hoping to conduct scientific research in King Edward VII Land. They came across a surprise on their way back to camp: Roald Amundsen’s expedition had arrived and was camped in the Bay of Whales.

The two parties exchanged pleasantries, and Campbell hastened back to camp to inform Scott that his rival had arrived. Despite his disappointment, Scott decided to go forward with his plan and continued laying supply depots farther and farther into the continent’s interior in preparation for the push to the pole.

The mission encountered complications almost immediately. The party was held up by fierce blizzards. The ponies began to weaken and die after doing far worse than expected. Only two of the eight ponies who went on the depot-laying mission returned.

While that was going on, groups of geologists went out to look around, surveying uncharted areas and gathering samples and specimens.

With the beginning of the Antarctic winter in April 1911, the 25 men of the shore party hunkered down in the hut, passing the time with lectures, scientific studies, and the occasional soccer match. Scott kept working on his calculations and preparations for the journey to the pole.

Dr. Edward Wilson, Chief Scientist, led a group of men on a mission to retrieve Emperor penguin eggs from a rookery 60 miles away in the midst of the winter, despite near-hurricane force winds and temperatures as low as -77 degrees Fahrenheit. They got three eggs out of the ordeal.

When spring came, Scott described his strategy for approaching the South Pole. A group of 16 men would go out across the Great Ice Barrier with motor sledges, ponies, and dogs to carry supplies.

Members of the party would turn back at specific latitudes, leaving a final group of five to reach the pole. On October 24, 1911, the group with the motor sledges left. After about 50 miles, the sledges broke down. Scott had to change his plan and force the dogs to keep on without them.

The dogs were returned to base, and on January 3, 1912, Scott chose the four men who would join him on the polar expedition: Chief Scientist Dr. Edward Wilson, Lawrence Oates, Henry Bowers, and Edgar Evans. The last five men made their way south.

On January 16, amid the endless expanse of white nothingness around them, they spotted something — a black flag fluttering from a sledge runner. A note was attached. Amundsen had beaten them by a month.

Scott and his companions arrived at the South Pole the next day, crestfallen, and located Amundsen’s camp the next day.

Their mission was complete, though not the triumph they had hoped for. ‘The POLE,’ Scott wrote in his journal. Yes, but under very different circumstances from those expected. Great God! This is a terrible place, and we worked hard to get here without the benefit of being first. ‘

The deflated group began their 800-mile (1,300-kilometer) return journey on January 19, 1912. After a good start, they began to suffer from slow hunger, hypothermia, and scurvy. Nonetheless, they adhered to their scientific mission, collecting geology samples whenever possible.

The final demise of the men was harrowing, amid worsening weather conditions. Edward Evans died on February 17th at the base of Beardmore Glacier after falling and suffering head injuries. Captain Oates had serious frostbite and walked out into the cold to the words, “I am just going outside and it may take some time…”, later recorded by Scott, walking out into a blizzard to sacrifice his life so the other men could continue without hindrance.

In due course, having taken shelter in tents and written farewell messages to their family, Scott and his two surviving comrades, Bowers and Wilson, perished from most likely starvation and exposure to the extreme cold. Eight months later, their bodies were found.

“Every day we have been ready to start for our depot 11 miles away,” Scott wrote in his diary on March 29, 1912, “but outside the tent door it remains a scene of whirling drift.” “I don’t believe there is any hope for the future. We’ll fight to the end, but we’re getting weaker, and the end can’t be far away. I’m sorry, but I don’t believe I’ll be able to write any more. Scott, Robert. This is the final entry. For God’s sake, take care of our people.

The other members of the expedition returned to camp and made numerous trips to supply depots in the hopes of catching the polar party, but to no avail. A search group went out on October 29 after wintering in the hut. Less than two weeks later, they found the bodies of Scott, Wilson, and Bowers. They buried them in a stone cairn.

In 1913, Scott’s late wife, Kathleen, was made the widow of a Knight Commander of the Order of the Bath. Kathleen was not allowed to be called Lady Scott because Scott had not been knighted posthumously, but she could be treated as if she were the widow of a knight.

The Polar Medal (silver or bronze) with a clasp inscribed ‘Antarctic, 1910-1913’ was awarded to members of the expedition (Bowers, Oates, Wilson, Edgar Evans, Scott, and Brissenden posthumously) in July 1913.

In the same year, in 1913, a wooden cross was put up on Observation Hill on Ross Island. It had the names of the dead explorers and the Tennyson quote, “To strive, to seek, to find, and not to give up.”

Share
Facebook
Twitter
Pinterest
WhatsApp
Previous articleA 7-year-old girl was given cooked noodles every afternoon for 5 years; she repays him with monthly finances and protection 25 years later.
Next article10 Amazing Ancient Technologies That Proved Our Ancestors Were Way Ahead of Its Time!
Advertisements
RELATED ARTICLES
History