HomeScienceAstronomers have captured the death throes of a red supergiant.
Science

Astronomers have captured the death throes of a red supergiant. 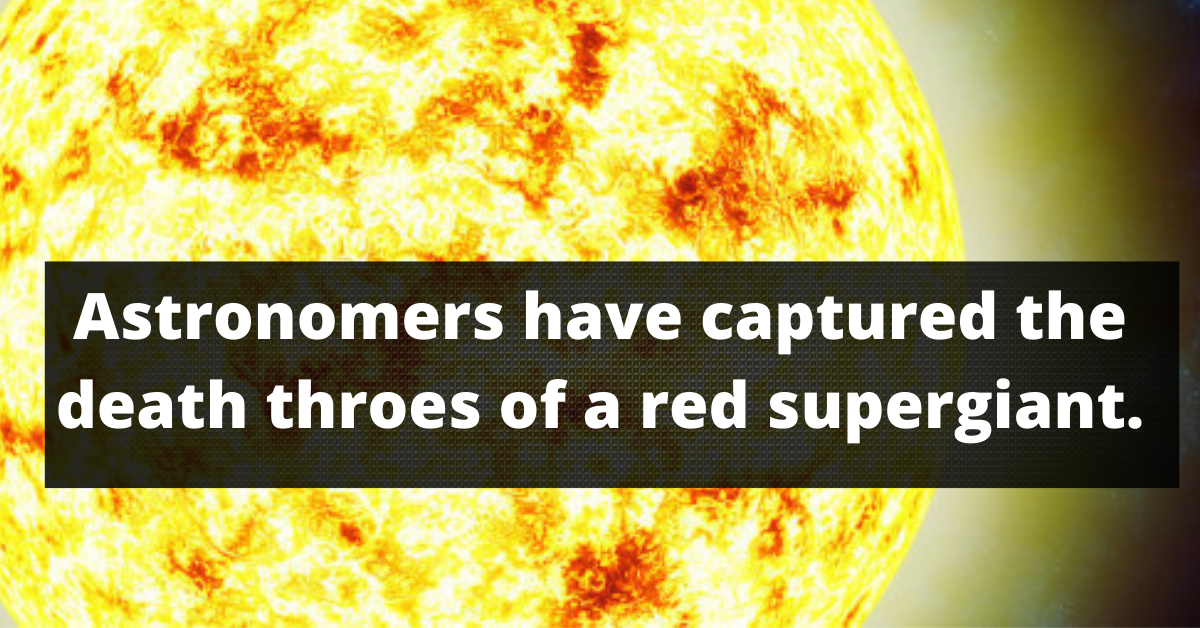 The team, led by researchers from Northwestern University and the University of California, Berkeley (UC Berkeley), observed the red supergiant during its final 130 days before exploding.

The discovery contradicts previous theories about how red supergiant stars evolve before exploding. Earlier observations revealed that red supergiants were relatively quiet before dying, with no evidence of violent eruptions or luminous emissions. However, the new observations discovered bright radiation from a red supergiant in its final year before exploding. This implies that at least some of these stars must undergo significant internal structural changes, resulting in the tumultuous ejection of gas just before they collapse.

“This is a breakthrough in our understanding of what massive stars do moments before they die,” said Wynn Jacobson-Galán, the study’s lead author. “Direct detection of pre-supernova activity in a red supergiant star has never been observed before in an ordinary type II supernova. For the first time, we watched a red supergiant star explode.”

The discovery was published 06 Jan 2022 in The Astrophysical Journal.

Although the research was conducted while Jacobson-Galán was a National Science Foundation (NSF) Graduate Research Fellow at Northwestern, he has since transferred to UC Berkeley. Deanne Coppejans, Charlie Kilpatrick, Giacomo Terreran, Peter Blanchard, and Lindsay DeMarchi, all of whom work at Northwestern’s Center for Interdisciplinary and Exploratory Research in Astrophysics, are among the co-authors (CIERA).

The doomed massive star was discovered in summer 2020 by the University of Hawaii Institute for AstronomyPan-STARRS on Haleakal?, Maui, using the massive amount of light emitted by the red supergiant. A supernova would light up the sky a few months later, in the fall of 2020.

Using the W.M. Keck Observatory’s Low Resolution Imaging Spectrometer on Maunakea, Hawaii, the team quickly captured the powerful flash and obtained the first spectrum of the energetic explosion, named supernova 2020tlf (SN 2020tlf). The data revealed direct evidence of dense circumstellar material surrounding the star at the time of the explosion, which was most likely the same gas that Pan-STARRS had observed the red supergiant star violently ejecting earlier in the summer.

“It’s like watching a ticking time bomb,” said Raffaella Margutti, the paper’s senior author and an adjunct associate professor at CIERA. “Until now, we’ve never confirmed such violent activity in a dying red supergiant star, where we see it emit such a luminous emission, then collapse and combust.”

Following the explosion, the team continued to monitor SN 2020tlf. Based on data from Keck Observatory’s Deep Imaging and Multi-Object Spectrograph and Near Infrared Echellette Spectrograph, the researchers determined that SN 2020tlf’s progenitor red supergiant star was 10 times more massive than the sun and was located in the NGC 5731 galaxy about 120 million light-years away from Earth.

Margutti and Jacobson-Galán conducted the majority of the research while at Northwestern, where Margutti was an associate professor of physics and astronomy and a member of CIERA, and Jacobson-Galán was a graduate student in Margutti’s research group. Margutti is now an associate professor of astronomy and astrophysics at the University of California, Berkeley.

Northwestern’s remote access to the telescopes at Keck Observatory was critical to their research. Astronomers can communicate with an on-site telescope operator in Hawaii from the University’s Evanston campus and decide where to position the telescope. Astronomers save valuable observing time by avoiding long-distance travel to Hawai?i, often catching transient events like supernovas, which can quickly flare up and then vanish.

“This significant discovery of a red supergiant supernova is yet another strong indication of the importance of Northwestern’s investment in access to top private telescope facilities, including the Keck Observatory,” said Vicky Kalogera, director of CIERA and the Daniel I. Linzer Distinguished University Professor of Physics and Astronomy at Northwestern’s Weinberg College of Arts and Sciences. “As CIERA researchers have demonstrated since our Keck partnership began just a few years ago, the Keck telescopes, which are currently the best on our planet, uniquely enable scientific advances of this caliber.”

Margutti, Jacobson-Galán, and their Northwestern colleagues are part of the Young Supernova Experiment, which uses the Pan-STARRS telescope to observe supernovae as they explode.

“I am most excited by all of the new ‘unknowns’ that this discovery has revealed,” Jacobson-Galán said. “Detecting more events like SN 2020tlf will have a significant impact on how we define the final months of stellar evolution, uniting observers and theorists in the quest to solve the mystery of how massive stars spend their final moments.”