HomeHistoryThe Most Valuable Pennies of All Time
History 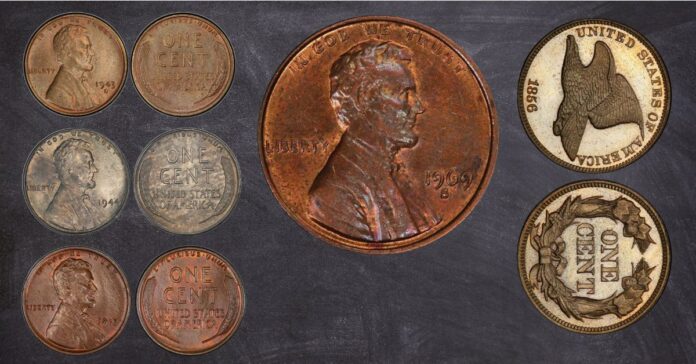 The penny has been a part of the US currency for almost as long as the country has been independent. In actuality, Benjamin Franklin designed the first “Fugio cent.” The images on the coin have always symbolized the spirit of the country. In recent years, there has been talk about abolishing the penny as we move toward a cashless society, but we’re not quite there yet.

As with anything mass-produced, some mistakes have crept into the circulation of the penny. Those coins are hard to come by, but if you have one, you could be in line for a significant financial windfall. Perhaps you have a forgotten collectible in a bowl or piggy bank. Here’s a list of the most valuable pennies to help you find that one-of-a-kind treasure.

Why It’s So Expensive: This was a happy accident for collectors, created in the San Francisco Mint. In 1943, pennies were made from zinc-coated steel planchets, but some copper planchets from the previous year were left behind, and the coins were struck on those. Some believe it was a mistake, while others say it was done on purpose. In any case, just five copper pennies from that year are known, making this coin the “holy grail” of pennies for collectors.

What It’s Worth: Michael Tremonti, a Michigan collector, found one in a roll of uncirculated pennies. He eventually sold it for $126,500.

Why It’s So Expensive: When the die used to stamp a coin with an image isn’t perfectly aligned, images or letters appear “doubled” on the coin. This is the story of the 1969-S Doubled Die Penny. The coins, of which there are about 40 or 50, are highly valuable.

Why It’s So Expensive: The 1943 Copper Wheat Penny is quite valuable, much like the 1943-S Copper Wheat Penny, minus the mint mark. It was made in the same way as the 1943-S, using leftover copper from the mint’s machines. There are only about 40 coins said to exist, so finding one is like finding a needle in a haystack. There are also a lot of fake coins from this year on the market, which are made by changing the dates or coating steel pennies with copper.

Why It’s So Expensive: Only 700 Flying Eagle pennies were made, and they were never widely circulated. As a trial run for the newly designed penny, the first batch was given to members of Congress and other political influencers of the time. The new coin was a hit, and 3,000 more Flying Eagles were made. They are highly valuable, whatever their condition.

Why It’s So Expensive: Unlike the other pennies on this list, the 1877 Indian Head Penny was not made in error in any way. The reason why it’s so valuable is because there weren’t that many made to begin with-a little over 850,000 coins were minted in 1877. In comparison to the previous year, when 7.9 million pennies were created, and the year after, when 5.9 million coins were produced, this is nothing.

Why It’s So Expensive: An 1873 Indian Head Penny is worth between $20 and $450, but if your 1873 penny has a doubled die mistake on the word “Liberty” in the Indian’s headband, you’ve got a winner on your hands. The coin was designed after the US Mint’s output more than doubled that year. The coin’s “closed 3” version refers to the serifs used on the “3” digit in 1873, which are near enough to the number’s centre to appear to be a “8.” This coin is much rarer than the “open 3” version.

Why It’s So Expensive: Because the Denver Mint was the only mint making pennies in 1922, this coin should have a “D” mint mark. Due to an overworked coin die, some have no mark at all, while others have weak, nearly unnoticeable hits. If you find a 1922 cent without a “D,” you’ll get top dollar.

Why It’s So Expensive: This is another example of a doubled die error caused by an unaligned die. This miscalculation is said to have happened during an overnight shift, and mint employees were unaware of the error until thousands of the coins had already entered circulation. They decided to let the rest of the batch circulate as well. The obvious doubling of the year and lettering on this coin is visible even without magnification. In a batch of 10 million, about 24,000 error pennies were spread. They eventually made it into cigarette vending machines in Massachusetts and New York. It is thought that there are about 15,000 of these pennies still in circulation, and they are popular to collect in any condition.

Why It’s So Expensive: This penny is quite similar to the older, more pricey 1873 Doubled Die Indian Head Penny, but there is one difference: The serifs at the ends of the “3” in 1873 are not as close to the middle of the digit as the earlier in the year “closed” version. The “open 3” penny is much more common than the “closed 3” and is subsequently worth much less.

Why It’s So Expensive: A 1917 wheat penny isn’t worth much on its own. If you locate one that’s in great condition, you can get about $120 for it. The versions struck twice by the die on the coin’s front, or obverse, are far more valuable. It is a popular coin among collectors because it was minted in Philadelphia.

Why It’s So Expensive: During his presidency, Theodore Roosevelt wanted to redesign the penny. He hired Victor David Brenner as an artist, who worked on the coin for almost a year before it was published in 1909. This was the first penny to feature the likeness of the former president. The coin was quite popular until the artist’s initials on the reverse side were noticed by the media. The government removed the initials because it was argued that keeping “VDB” on the coin amounted to free promotion for Brenner. Only roughly 500,000 of the San Francisco-minted initialed pennies entered circulation. Today, 1909 coins with Brenner’s initials can fetch a premium price.