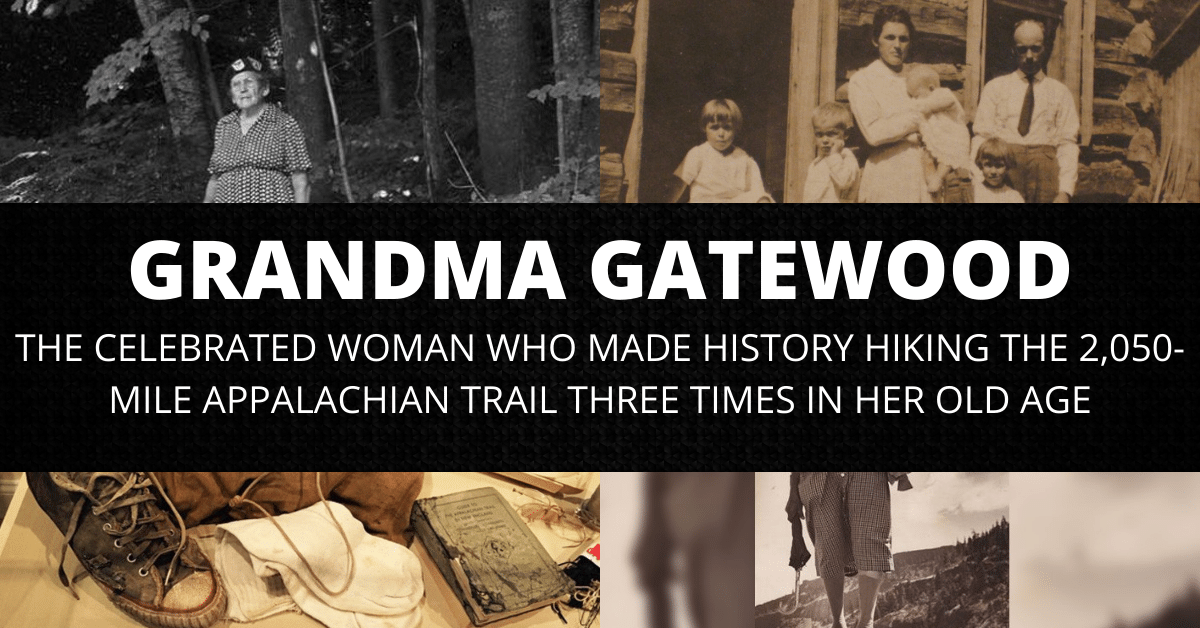 THE CELEBRATED WOMAN WHO MADE HISTORY HIKING THE 2,050-MILE APPALACHIAN TRAIL THREE TIMES IN HER OLD AGE

The Appalachian Trail is a 3,500-kilometer hiking path that runs from Georgia to Maine. It began as a dream idea for Benton Mackaye and now spans 14 states in the United States. In 1921, Mackaye, who was then a regional planner, envisioned a hiking trail that city dwellers could use as a utopia. He presented his ideas to the Appalachian Trail Conference after garnering enough support. However, Mackaye dropped out of the project after a disagreement with ATC chair Myron.H.Avery. Under the direction of Myron.H.Avery, the trail was completed in 1937.

However, hurricanes and World War II wreaked havoc on the trail. Earl Shaffer, a WW2 veteran, resurrected the closed trail in 1948 by claiming to have hiked it from end to end. Earl Shaffer’s success story of hiking the trail from both ends reached Grandma Emma in 1949 via a National Geographic article. She told herself that if a man could do it, she could too. Due to the nature of the trail, a greater number of men “thru-hiking” it than women was recorded. Two male hikers had made it onto the list of solo thru-hikers before Emma set foot on the trail.

Grandma Gatewood, 67, hiked the Appalachian Trail in 146 days, covering 2,050 miles. She was the first person to complete the trail three times.

Born Emma Rowena Gladwell, also known as “Grandma Gatewood,” was born on October 25, 1887, in Ohio to a farmer. At the age of 19, she exchanged her farm life for marriage to Perry Clayton Gatewood, a schoolteacher. They were fortunate to have 11 children and 23 grandchildren. Emma spent her entire life working on farms and finding solace in the woods. Her abusive husband coerced her into filing for divorce, which she received in 1941.

Emma’s hiking career began in 1953, when she attempted but failed to complete the Appalachian Trail. Gatewood attempted to hike the Appalachian Trail again in July 1954, but broke her glasses and became lost in the Maine woods. She was discovered by forest service wardens, who struggled to persuade her to abandon the hike. Emma eventually agreed to call it quits on the hike and return home to prepare for another epic attempt. She hiked the Appalachian Trail alone in 1955, at the age of 67, gaining national attention. She completed the entire trail in 146 days.

Grandma Gatewood walked 10 miles a day to exercise and put her weak legs to the test prior to the Historic trek. She was staying at one of her son’s house in Ohio at the time.

Grandma Gatewood had never hiked before, but she knew how to put in the effort. Working in the fields all day, every day was a part of her childhood. Emma was a hardworking and determined woman with 11 children to care for. Her only form of exercise prior to her historical hike was a daily walk of 10 miles. Grandma Gatewood would walk around the neighborhood every day while living with her son in Ohio, increasing the pace until she felt ready for the journey. Emma also saved the little money she earned while working in a nursing home. The money came in handy while she was hiking. She also hand-sewed her slingback, making her the pioneer of lightweight backpacking for hikers.

Grandma Gatewood only had an army blanket, a shower cape, an army knife, a flashlight, a candy mint, a pen, and a notebook with her. She was mostly dependent on strangers for food and water.

Unlike the other trail hikers, Emma, 67, brought a few items with her to help her along the way. She wished to reduce the weight of her luggage as much as possible. Band-aids, iodine, an army knife, a flashlight, a blanket, Keds shoes, Vienna sausages, shower curtains, and a pen and notebook were all in her homemade backpack. She didn’t have a tent, a map, or a compass with her and had to rely on strangers for food and shelter. Fortunately, Grandma Gatewood was able to get the assistance she required because her story was widely publicized. A family based at Rainbow Lake served Gatewood roast beef and pie, according to a memoir written by Ben Montgomery. In addition, Ked’s Shoe Company provided her with additional pairs to last her the duration of the journey.

Emma’s hiking story went viral and was picked up by the media, making her a celebrity. Her story was picked up by local reporters in the southern states, and she was later invited to appear on the Today Show after completing the hike.

Many people were perplexed by a 67-year-old mother of 11 and grandmother of 23 hiking the 2,000-mile Appalachian Trail. The hike of Grandma Gatewood drew the attention of the media. When she was in the southern states, she first appeared in a local newspaper. Later in the journey, while in Maryland, the associated press covered her journey. While she was in Connecticut, Sports Illustrated featured her in their article section. She was finally invited to the Today Show. The only question the press had for her was why she was hiking at that age, and all she could say was that the trail was there.

Grandma Gatewood was known in the media as a widow. However, the truth is that she was a survivor of domestic violence. She often found herself alone in the woods. Her husband frequently abused her and forced her to work long hours both in the fields and at home.

Journalists had no idea Emma had been a victim of domestic violence. They knew her as a widow because that was how she introduced herself to them. Emma married Perry Clayton Gatewood, who mistreated her almost immediately after they were married. He’d savagely beat her and work her to the bone. Grandma Gatew

ood fled to the woods to avoid her husband. Because of the constant abuse, she filed for divorce, which was granted in 1940. Emma went on to raise her last three children on her own.

Grandma Gatewood’s bravery and determination to hike the Appalachian Trail’s over 2,000 miles inspired many to protect the trail.

Grandma Gatewood’s widespread media coverage revitalized the Appalachian Trail. She told the press about how bad the trail was and how the shelters along the way were uninhabitable. She was able to bring to light the trail’s poor condition, which drew the attention of politicians and the ATC. The trail has been renovated and is now open to the public. Politicians took up the trail’s cause, and in 1968, a National Trail System was established to protect it. Emma’s hiking also inspired a new generation of hikers, including female hikers. She hiked the Appalachian Trail again in 1957 and 1964, becoming the first person to do so three times.