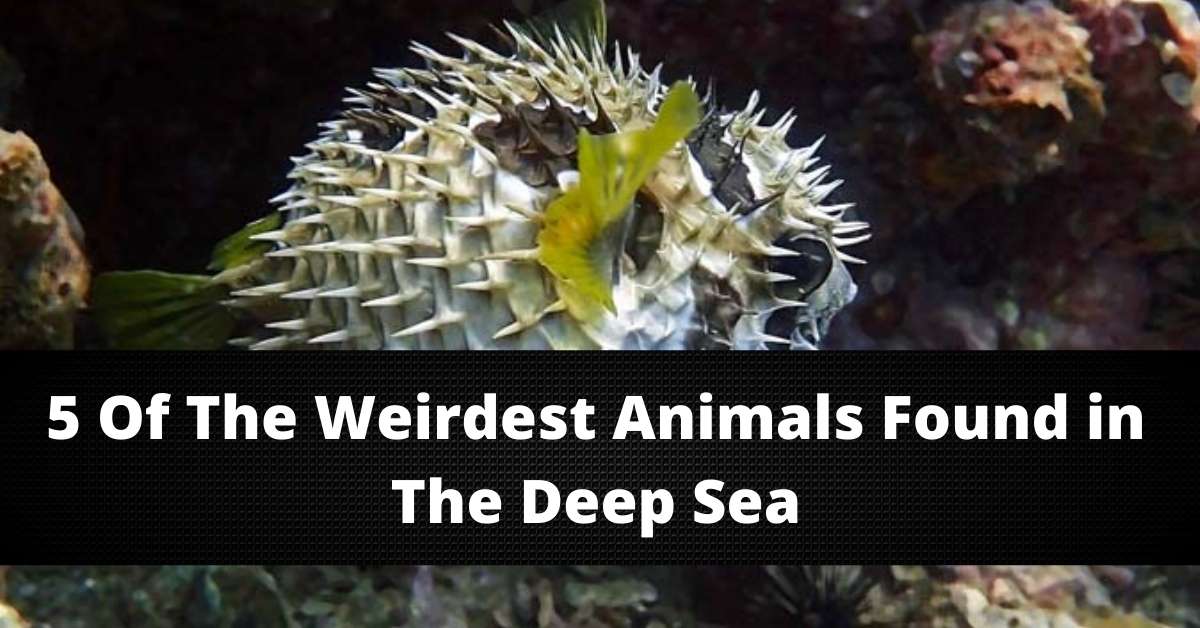 The universe isn’t the only thing that remains unexplored. The never-ending sea’s dark depths are the second most obvious example of this type of thing. In the oceans, there are endless mysteries of fascinating environments, phenomena, flora, and fauna waiting to be discovered. Forget the unknown; the deep-sea creatures we’ve already discovered are more than a little enticing. Here are ten of the strangest but most fascinating creatures discovered in the deep sea.

The frilled shark is one of the most obnoxious-looking creatures in the deep sea. They can grow to be seven feet long, swim like an eel, and get their name from their frilly gills. They are prehistoric creatures with origins dating back 80 million years.

Even though they are called sharks, they swim in a vicious, serpentine fashion, similar to an eel. They primarily eat squids, fish, and other sharks, and are known for swallowing their prey whole, even if it is large.

This organism got its name from the six rows of gills on its throat that resemble ruffled collars. They are usually dark grey or brown in color and have a flat head.

Unlike most animals, they do not have a placenta and reproduce solely through internal fertilization.

Because there have only been a few encounters with these sharks, detailed research on them has yet to be completed. They only come to the surface of the water at night to look for food. They spend the rest of their time walking along the ocean floor. The first video of a frilled shark was taken in 2004.

The anglerfish is an angry-looking fish with a curved appendage sticking out from its spine in front of its mouth, resembling a fishing rod. This structure contains bacteria that produce light, and the fish uses this light to attract and then devour prey.

The fish with the one-of-a-kind “fishing rod” lives in the harsh environment of the deep, lightless seafloor.

Until now, 200 anglerfish species have been discovered in the deep Atlantic and Antarctic oceans. They can also be found in tropical seas with shallow environments. The fish, which is usually dark grey or brown in color, has a massive head and a crescent-shaped mouth with sharp, translucent teeth. Most of these fish grow to be less than a foot long, but some can grow to be more than three feet long.

The angler fish’s most distinguishing feature is its “fishing pole,” which rises from its spine and illuminates in front of its mouth. Other organisms are naturally drawn to it and are eaten by the predator, which has a mouth large enough to swallow prey twice its size. This feature, however, is only found in female anglerfishes.

The species’ male population is always on the lookout for a host female. The male attaches himself to her body with its sharp teeth and eventually fuses completely with her. During the process, the male loses his eyes and all of his internal organs except his testicles. A female anglerfish can support six or more males on her body.

3. Blobfish or The Fathead

The Psychrolutes microporous species of blobfish is widely regarded as the world’s most hideous animal. The fat, disgusting, and sluggish-looking organism lives and feeds 4,000 feet beneath the ocean’s surface. However, the popular Internet image of the creature is deceptive. It only appears ugly when it is dead.

This fish, also known as the “fathead,” was discovered by a research vessel off the coast of New Zealand in 1983. They live in the ocean’s depths, where the pressure is more than 100 times that of the water’s surface.

The blog fish became a popular Internet meme after its discovery and a poll about the world’s ugliest animal. It was dubbed “Mr. Blobby” in 2007.

However, the popular image of the fish is quite deceptive. The organism is indeed squishy, with very soft bones and a few muscles, but it only appears ugly when brought to the surface. The actual living appearance of fish is unknown because they only appear in the deepest parts of the ocean.

Decompression causes its body to expand, relaxes the skin, and collapses into a dull shapeless mass as the gelatinous tissues lose their structure.

Scientists explain that because of its fatty body, the fish swims effortlessly in the deep ocean, much like oil floats on water. Because water carries them, they literally swallow anything edible that passes by.

The whitemargin stargazer has double-grooved poison spines above its pectoral fins, which it uses to sting its prey. It also has an electric organ in a pouch behind its eyes that it uses to attack prey with up to 50 volts. The stargazer spends most of its time burrowed beneath the sand, only its eyes peeking above the surface.

The whitemargin stargazer is a species of fish that lives in relatively shallow waters in the Indo-Pacific region and off the coast of Queensland. The fish has fascinating hunting techniques that are unique to it. It sits patiently in the sand, eyes wide open, waiting for its food. The creature is so fast that it can create a vacuum in the water and grab its meal in milliseconds.

The poisonous spines on its shoulder blades help it not only hunt but also defend against large predators. The fish is also endowed with modified muscle cells known as “electroplaques,” which can deliver up to a 50-volt shock like an electric eel.

As if that weren’t enough, the stargazer has a tongue-like, long, furry structure that it can waggle and attract prey with. It uses this appendage to lure its prey in and then ambush them with its venomous and electric techniques.

The porcupinefish has tough spines up to five centimeters long that surround its body and act as modified scales. When threatened, it can also swallow water and expand its body into an orb. This deters predators from attempting to swallow the puffed-up fish, and even if they do, the spines are poisonous to them.

The species resembles its relatives, the balloonfish and the pufferfish. The porcupinefish, on the other hand, is distinguished by its uniform grayish-tan coloration, spines around its body with black spots, and a white belly.

This spiked fish can be found alone near reefs, caves, and ledges, feeding on crustaceans and mollusks at night. An adult porcupinefish is typically 16 inches long, but it can grow to a maximum length of 36 inches.

In normal circumstances, the spines lie flat around the body, but when the fish detects a threat, it bloats and its spines straighten. The spines also secrete poisonous substances, making them an unappealing food source for predators.

Divers who approach the organism flee, but they are still captured and consumed in Hawaii and Tahiti.