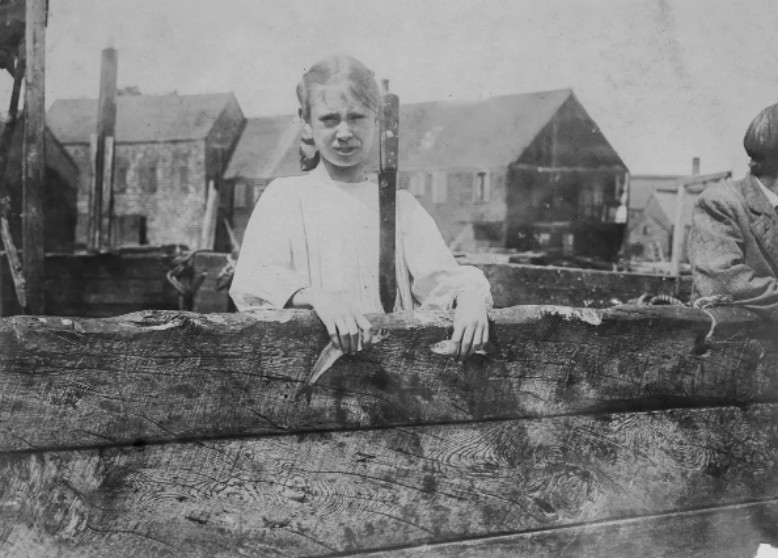 The American Child Protection Council hired photographer Lewis Hine in 1908 to report on and document the working conditions and exploitation of kids (or “underage laborers”) across the United States.

He traveled around the country, interviewing thousands of children in working environments and photographing the brutal reality of life for bike messengers, newsies, miners, and other workers.

Hine visited Eastport, the origin of the American sardine industry, where many children were still employed in the industry. The result is a lurid series of pictures.

Eastport is a small town in Maine that is made up of several small islands. As a cheap workforce, many youngsters used to work in the sardine factories.

They would make $1,50 for a day of sardine filleting. Many worked as “cutters,” chopping the heads and tails off freshly caught fish and delivering them to be canned, packed, and shipped.

The factory work was physically tough. Speed was required, as was caution to avoid packing part of a finger with sardines, which resulted in inconsistent goals at best.

The hours flew by until there were no more fish to pack. Because the factory had very little automation, each can of sardines was handled numerous times by workers before being shipped to market.

The children Hine spoke to routinely experienced painful wounds while working lengthy hours with sharp knives in cramped, slippery quarters, and were incentivized to prepare as many sardines as soon as possible.

The American Child Protection Council eventually used these photographs as proof to pass a new law forbidding children from working in industries.

After New York City, Eastport was the country’s second-largest trading port in 1833. Farms produced hay and potatoes. A grain mill, a box factory, and a carding mill were among the businesses.

However, the island’s economy was mostly based on the sea. Eastport’s large harbor remained ice-free all year because to tides of roughly 25 feet (7.6 m).

Around 1875, the first sardine factory was established here. The growth of the sardine fishery and accompanying canning companies, which dotted the shoreline by the end of the 19th century, increased the population.

The plants employed about 800 men, women, and children. Eastport would be incorporated as a city on March 18, 1893. However, the fishing sector began to collapse, and many people relocated. In fact, the city declared bankruptcy in 1937.