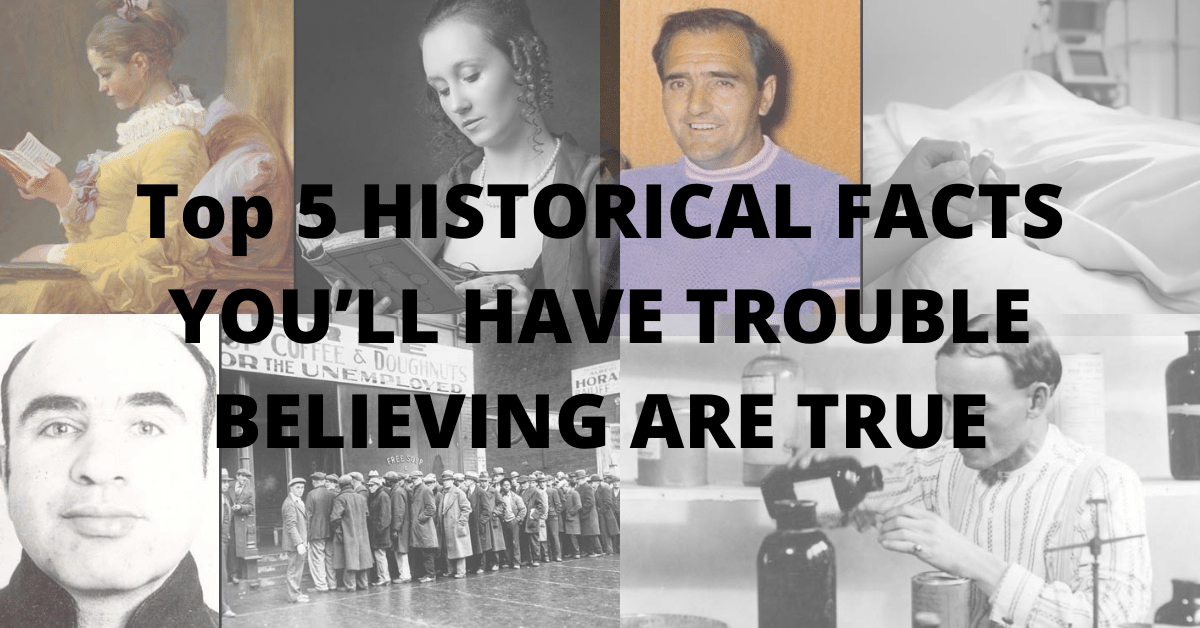 History has always been a fascinating revelation, and it never ceases to surprise us. It’s full of unbelievable and unexpected events that can be difficult to process at times. These events were considered normal at the time, but they now sound completely unacceptable. The following is a list of five historical facts and events that are so unusual that reading them will astound you.

1) During a drought in 1915, the city of San Diego hired a “rainmaker” named Charles Hatfield, who promised to make it rain with a special chemical concoction for a $10,000 fee. Days later, the city was hit by one of the most devastating floods in recorded history.

Charles had already gained popularity prior to the event due to his rain-making technique, which he allegedly used to produce rain. In 1902, he created it by combining a secret mixture of 23 chemicals in a large galvanized evaporating tank.

The year 1915 was extremely dry for the people of San Diego, so the Improvement Club persuaded the city council to invite Charles to solve the drought problem. The primary demand was that the rain produced fills the Morena Dam reservoir.

Hatfield and his brother constructed a tower beside Lake Morena, and the reservoir was indeed filled with water when Charles released his secret 23-chemical mixture into the air from the tower, attracting clouds and precipitating rain.

However, on 5 January 1916, heavy rain flooded the town and overflowed into the riverbeds as a result of that event. The heavy rain continued for at least a month, destroying everything from homes to farms and killing 20 people.

While acknowledging to the press on 4 February that he was responsible for the rain, Charles denied responsibility for the damage and blamed it on the locals, saying, “They didn’t take the adequate precautions.”

The council decided not to pay Hatfield until he accepted his $3.5 million liability for damages. Hatfield attempted to settle the dispute for $4,000 and then sued the council.

The case was not settled until 1938 because Charles continued to sue, but two courts eventually agreed that the rain was an act of God, which meant that Charles was not guilty of anything but would not be paid.

2) During the 1930s Great Depression, Al Capone, the infamous gangster, served three meals a day to 2,200 unemployed people in Chicago on a daily basis. The soup kitchen where he fed the hungry advertised “Free soup, coffee, and doughnuts for the unemployed.”

Can one expect a gangster to be so kind and philanthropic in the face of one of the most financially precarious situations? Capone was the gangster who carried out the 1929 St. Valentine’s Day Massacre, assassinating seven rivals.

The organizers of the feast were unknown when the program was carried out, but the Chicago Tribune discovered a week later that it was none other than Al Capone.

One of Capone’s associates later told the Chicago Tribune that it was difficult for Capone to stand up and see so many people starving while no one seemed to be doing anything about it, so he decided to take action himself. Even the women who worked in the soup kitchen were eager to help.

The meals were not paid for out of Al Capone’s own pocket. He exhorted and bribed businesses to donate kitchen supplies.

He gained enormous popularity among the common people, but his crimes did not restore his public good, and he was sentenced to prison.

3) Dying from laughter is a recorded cause of death, and one such instance occurred in 1975, when Alex Mitchell died from heart failure after laughing for 25 minutes after hearing a Goodies T.V. Show joke.

From the time of the ancient Greeks to the present, many people have died as a result of laughter. Alex Mitchell is one such case; he died after laughing for 25 minutes straight at a joke on a “Ecky-Thump” episode of The Goodies Show. The cause of death is said to be heart failure. In 1975, Alex’s death was all over the news.

Doctors concluded that it is a hereditary cardiovascular problem based on the fact that Alex’s grandfather had a near-fatal cardiac arrest and Alex’s daughter, Lisa, also dealt with an internal cardiac defibrillator and displayed similar symptoms.

4) Reading was once thought to be a disease in the 18th century. Novels became popular, and young people began to spend more time reading. As a result of this excessive reading trend, society became concerned, coining terms such as “reading rage,” “reading fever,” “reading mania,” and “reading lust.”

People were enraged and spoke out about the dangers of excessive media reading. They regarded this as a disease, one that was addictive, and gave it various names. In the 18th century, this was not just a concern of one or two countries; reports of a “reading epidemic” spread throughout Europe.

People assumed that excessive reading caused certain behaviors such as sensation-seeking, moral dissoluteness, and promiscuous behavior. It doesn’t stop there; self-destruction was also thought to be associated with reading novels.

The Sorrows of Young Werther, written by Goethe, was one such novel that was blamed for an increase in suicides and suicidal attempts.

5) Annie Edson Taylor, a 63-year-old American schoolteacher, was the first person to survive a barrel ride over Niagara Falls. Her motivations were financial, and she made some money speaking about her experience, but her manager stole her barrel, and she had to spend all of her savings on hiring private detectives to find it.

Anne’s husband was killed during the Civil War, and she moved to Michigan in 1898. She became aware of the growing popularity of the waterfalls on the Canadian-New York border while reading a random article in a newspaper about the Pan-American Exposition in Buffalo in 1901.

Anne decided to take on the high-risk task of going through Niagara Falls in a barrel for the sake of fame and money.

The creation of a customized barrel took a long time, and one of the reasons was that no one wanted to be a part of a potential suicide attempt. After a few months, the barrel was finished, and it was made of oak and iron, as well as being padded with a mattress.

Anne sent a domestic cat in that barrel to Horseshoe Falls a few days before the stunt to test the barrel’s strength. The cat was injured, but it lived.

Finally, on her 63rd birthday, October 24, 1901, Anne performed the stunt with her friends. After 20 minutes, she was successfully rescued by the rescuing team, and Anne was discovered alive with minor injuries to her head.

Anne later earned a decent living by speaking about her experience, but she was never able to amass vast fortunes. Frank M. Russell, her manager, stole her valuable barrel and fled. She spent all of her savings on hiring private investigators to find the barrel, which she did find in Chicago, but it soon vanished again, this time permanently.