HomeHistoryTOP 5 UNRESOLVED ROYAL CRIMES FROM ALL OVER THE WORLD
History

TOP 5 UNRESOLVED ROYAL CRIMES FROM ALL OVER THE WORLD 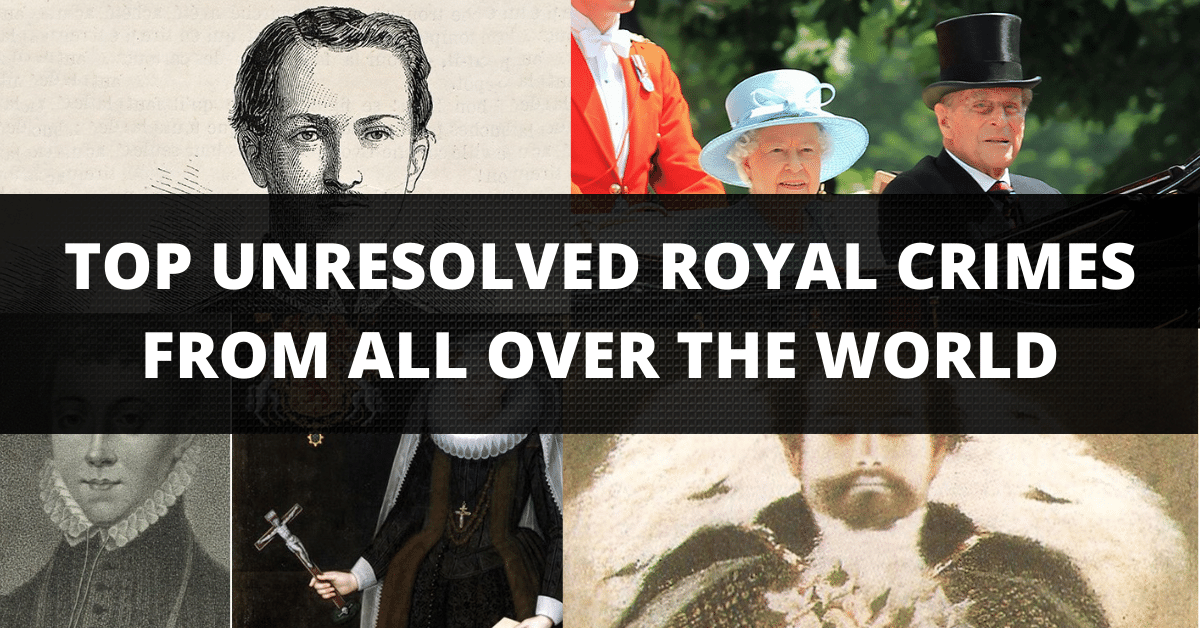 UNRESOLVED ROYAL CRIMES FROM ALL OVER THE WORLD

Most royal families are regarded to a higher level than other celebrities around the world. Often, this means that they have to follow strict rules of conduct and have very little privacy in their lives. This is because their citizens are very interested in what they do. Despite this, several well-guarded royal secrets have yet to be released to the public. So, for those of you who are curious sleuths, here are top unsolved royal crimes from around the world.

1. On June 13, 1886, the “Mad King,” Ludwig II of Bavaria, and his psychiatrist were discovered dead in a lake. Although their deaths were initially reported as drowning suicides, autopsies revealed that they may have been murdered. However, few people have truly questioned the official position, and these deaths are still hotly contested today

Ludwig II of Bavaria, the “Mad King,” was dethroned violently in 1886 on grounds of insanity. Rumors about the King’s homosexuality had long infuriated the nobility. Furthermore, the government was keen to oust him due to his lavish expenditures on fairytale castles. Soon after, a team led by Dr. Bernhard von Gudden, a German psychiatrist, deemed Hitler unfit to rule.

Three days later, on June 13, Ludwig II and von Gudden were discovered dead in a lake after last spotted strolling around the royal gardens. The Bavarian administration was similarly quick to consider the drowning a suicide attempt.

However, according to the autopsy, there was no water in Ludwig II’s lungs, implying that he died before entering the lake. To add to the intrigue, the doctor’s body bore obvious marks of being attacked. However, despite the odd circumstances surrounding their deaths, no one has challenged the official stance of their deaths.

2. Mary, Queen of Scots, and the Earl of Bothwell are accused of murdering the Queen’s husband, Lord Darnley, before marrying three months later. Despite the fact that Bothwell was arrested for the crime, he was eventually declared not guilty. Lord Darnley is thought to have been slain so that the Queen would not have to divorce him and risk having her children declared illegitimate.

Lord Darnley was assassinated in the backstreets of Edinburgh on February 9, 1567, by unknown assassins. In the cellar of the house he was in, a trail of gunpowder was also lighted, turning it to rubble. He was married to Mary, Queen of Scots at the murder, and accusations quickly grew that she had plotted with the Earl of Bothwell, whom she married just three months later.

Because Queen Mary was a devout Catholic, she was opposed to divorce, especially because it would render her children illegitimate. Because this would leave her without an heir, she is reported to have prayed for a means to keep her honor while also being free of her marriage.

This is most likely where Bothwell and his men got the notion to murder Lord Darnley. However, maybe because to a lack of evidence, Bothwell was found not guilty of the allegations brought against him.

3. In 2009, the Australian media revealed an alleged murder attempt on Queen Elizabeth II, prompting widespread outrage. According to this report, the Queen and her husband were traveling through New South Wales when their train was halted by a log of wood that threatened to derail them. The case had likewise been dismissed with no charges ever filed, leading to some suspicion about what happened.

Nearly 50 years ago, in 1970, an alleged assassination attempt on Queen Elizabeth II was unreported for political reasons. The Queen and Prince Philip were on tour in Australia at the time, and they were going by train through New South Wales.

Someone had obstructed the train tracks with a massive wooden log in an attempt to derail the train. Fortunately, this did not work because the train was moving slowly. Officials also highlighted that a sweeper train had passed through the area just an hour prior with no problems.

This information was not made public until 2009, when an Australian police officer revealed the facts to the media. Buckingham Palace, on the other hand, declared that no such incidence had ever occurred in its records. The Queen is still claimed to be unaware of the occurrence, and it is uncertain who the suspected culprits were.

4. On May 31, 1810, an unknown intruder attacked the Duke of Cumberland in his bed chambers. The gravely injured Duke managed to summon assistance, alerting the family about the assassination attempt. Later, the Duke’s valet, Joseph Sellis, was discovered with his throat cut in his room, sparking a slew of suspicions about the identity of the perpetrator that are still being contested today.

The Duke of Cumberland was attacked in his bed rooms by a hidden assailant in the early hours of May 31, 1810. The sleeping Duke was woken by someone hitting him over the head with the blunt edge of a sword.

Someone hit the sleeping Duke over the head with the blunt edge of a sword, waking him up.

In his condition of astonishment, the Duke screamed loud enough for one of his valets, Cornelius Neale, to enter the room. However, at this time, the Duke’s assailant had departed the room, leaving only his slippers behind.

The Duke then ordered a thorough lockdown of his residence in attempt to locate the assailant. The only person who was not present at the time was the Duke’s other valet, Joseph Sellis. When they finally got inside Sellis’ chamber, he was dead, his throat sliced.

Sellis is assumed to be the Duke’s assailant, and his motivation was most likely envy or retribution. However, none of this has been confirmed, and the situation remains unknown.

5. Even now, the death of Malaysian Princess Hasleza in 2002 remains shrouded in mystery. Five days before her death was discovered, witnesses witnessed the Princess being dragged out of her car and into a van. Princess Shahani, her husband’s first wife, was later detained for the crime but released owing to a lack of evidence.

Princess Hasleza, a Malaysian royal, was found gruesomely murdered in 2002, with her feet and hands tightly bound. She was a 26-year-old model and actress who had married Malaysian Prince Raja Jaafar Raja Muda Musa.

According to Islamic traditions, Malaysian men are permitted to marry more than one woman, but only the aristocracy is known to practice this. While still married to his first wife, Raja Nor Mahani, the Prince wedded Princess Hasleza in a same manner.

Witnesses observed Princess Hasleza being dragged out of her car and into a van on the day she went missing. Her body was discovered five days later beside a river 100 kilometers from Kuala Lumpur. Suspicion quickly fell on Raja Nor Mahani, who claimed she was envious of the attention her husband lavished on the subordinate wife. However, because there was no proof against her, she was released.