HomeHistoryV-Mail: A WWII program that scanned messages onto microfilm from 1942 through...
History

V-Mail: A WWII program that scanned messages onto microfilm from 1942 through 1945. 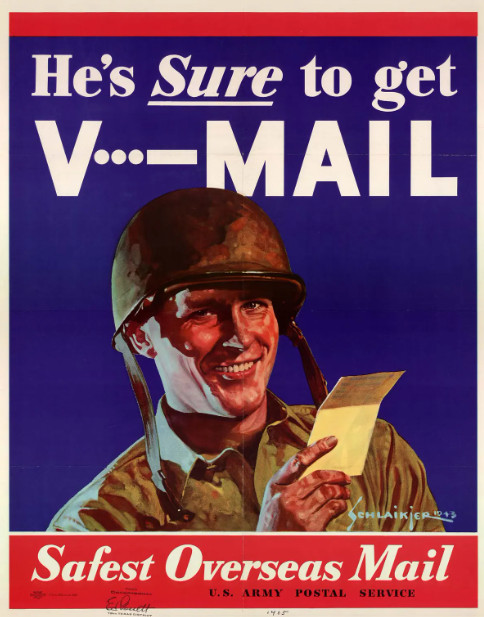 During World War II, letters were very important for soldiers and sailors who were stationed abroad. Every week, the average soldier wrote six letters. These letters took between one and four weeks to traverse the Atlantic and arrive in the United States.

Each letter received home reassured family members that their serviceman was still alive and well at the time he sent it.

Letters from home were the single biggest morale booster for the troops, because a force with high morale fights better.

The logistical task of shipping and delivering all of these letters proved to be rather difficult, particularly when the mail had to be transported over the Atlantic Ocean.

Mail delivered by cargo ships took up to a month to reach. However, sending mail via cargo planes, which took less than two weeks, was more expensive.

Furthermore, cargo space on these flights was limited (because to the need for critical weaponry and supplies), and letters were heavy and took up a lot of room.

The military mail service looked to the British “Airgraph” for a solution to this challenge.

The Eastman Kodak Company, in collaboration with Imperial Airways (now British Airways) and Pan-American Airways, devised the airgraph in the 1930s as a solution to reduce the weight and bulk of mail transported by air.

Letters would be written on preprinted forms, censored, and scanned onto microfilm; the microfilm would then be carried by plane, and the letters would be printed on photo paper and distributed.

This method was adopted by the US military postal service, which renamed it “Victory Mail,” or “V-Mail” for short, and it proved to be incredibly effective.

This solution resulted in enormous cost savings; 2500 pounds of paper letters in 37 mail sacks may be reduced to 45 pounds of film in a single mail bag. This, in turn, made place for more materiel to support the war effort.

The US cut waste even more by printing the letters at a scale of 60 percent. The use of V-mail also inadvertently deterred espionage; as only photocopies of letters were being sent, invisible ink and microdots were rendered useless.

Despite the fact that the V-mail system was only in use from June 1942 to November 1945, it handled over 1 billion items.

The adoption of standardized stationery, which integrated the letter and envelope into one piece of paper, was a significant feature of the V-mail system. This was a great space-saving measure even without microfilming.

The form was a specifically prepared sheet from the Government Printing Office that the Post Office issued free of charge at the rate of two sheets per person each day.

The way one wrote on the letter also played a big part in whether one would ultimately be able to read the reduced version. Users of V-mail were told: “Use a typewriter, dark ink, or dark pencil to write.”

Photographing faint or small writing is not recommended.” Originally, the forms could hold up to 700 typed words.

V-Mail had some disadvantages. Because only a specific number of words could be used, it was fairly restricting. Because the photo prints were 14 times the size of the original letter, the end output was unreadable if the print was too small.

Some stores even sold special “V-mail readers,” which were magnifying glasses that allowed readers to view the decreased print.

Another disadvantage of V-mail is that you couldn’t send attachments (at least at first) or leave a personal mark on the paper in the shape of a lipstick kiss. Lipstick was referred to as the “scarlet scourge,” because it would gum up the machines used to film the letters.

Despite its faults, V-mail was aided by marketing that branded V-mail use as a patriotic duty, and the service’s use grew over time. V-mail, without a doubt, saved valuable shipping space.