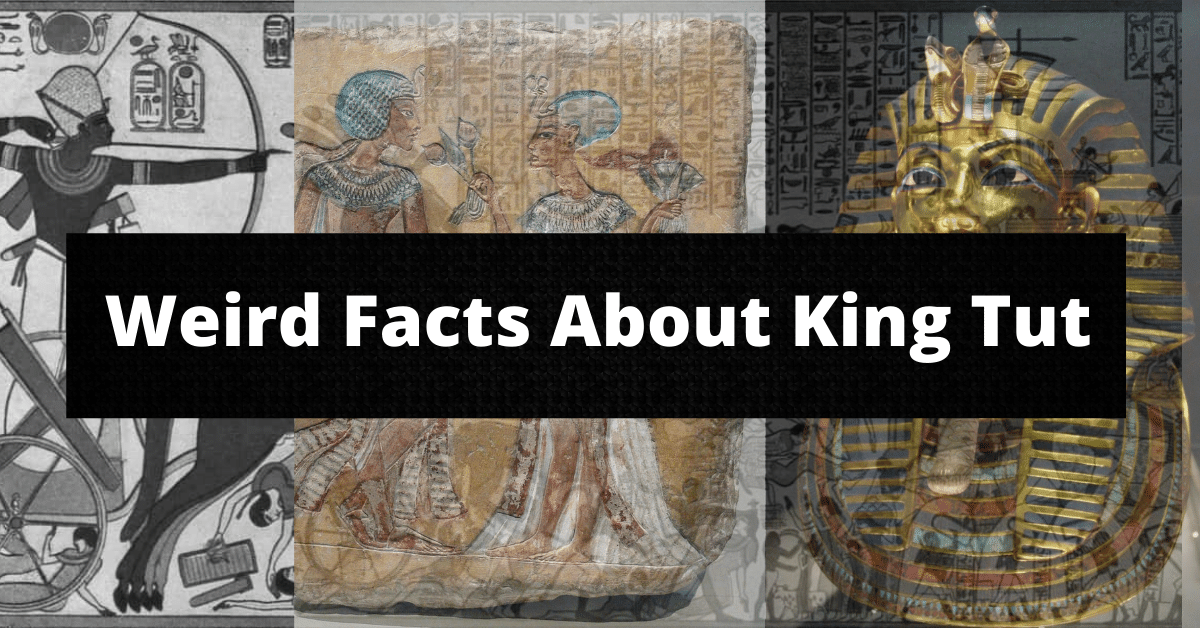 Facts about King Tut, the boy who led an empire and was buried in a tomb stuffed with gold and artifacts, have been more difficult to deduce than those about almost any other ancient ruler. Who was this young man entrusted with carrying on a line descended from the gods? How did he spend his time? And how did he pass away?

These questions have gradually been answered since Tut’s tomb was discovered in 1922. We discovered some surprising facts about his ancestry and physical stature thanks to advanced DNA analysis technology. It turns out he wasn’t the sensual, daring young man depicted in iconography discovered in his tomb and later in popular culture. Instead, he was the result of incest, born with deformities, with strings pulled by powerful generals, and a death caused by his ailments rather than murder.

Nonetheless, Tut, his death, the “curse” on his tomb, and the mythical figures in his life are all entwined in mythology. Here are some bizarre, but entirely true, facts about this legendary boy king.

Tutankhamun was the son of the powerful Pharaoh Ankhenaten and was born around 1341 BCE. Following the death of that pharaoh in 1334 BCE, two minor kings reigned until Tut took the throne in 1332. He ruled for about eight or nine years, and his main accomplishment was to return Egypt to polytheistic worship of the god Amun. Then, at the age of 19, he died in 1323 BCE and was buried in a hastily constructed but ornately decorated tomb that was forgotten about until it was discovered in 1922 by British researcher Howard Carter.

Tut Had A Variety Of Names

Tutankhamun was known as Tutankhaten, or “Living Image of Aten” before ascending to the throne of Ancient Egypt. Aten was the living embodiment of his father Akhenaten’s worship of the image of the sun disk, while Amun (also known as Amun-Ra) was the chief deity of Egyptian mythology. Tut’s name change implies a significant advancement.

His Father And Mother Were Related

Incest was extremely common among Egypt’s royalty, just as it was among European ruling families in the nineteenth century. They believed in preserving the purity of noble bloodlines, and Tut’s father and mother were most likely siblings.

Tut’s mitochondrial DNA, which is only inherited from the mother, was tested by researchers at the Institute for Mummies and Icemen in Italy, and it was discovered that his mother was the sister of the previous pharaoh Akhenaten, who was known to be Tutankhamun’s father. His mother was, in fact, his father’s sister.

His Mother’s Identity Is Unknown

Despite these findings, scientists are unsure who Tut’s mother is. There’s a chance she’s the famous Nefertiti, who was also Akhenaten’s wife, but there’s no way of knowing for sure. In the technical jargon of Egyptian studies, she is simply referred to as “The Younger Lady.”

He Had Numerous Disfigurements

Tut had a number of prominent physical disfigurements as a result of the incest that protected the Egyptian royal family’s bloodline. Tut, far from being the macho boy depicted in his golden death mask, most likely had a severe overbite, curved spine, massively disfigured foot, extremely slim hips, a skewed face, and epilepsy. He may also have had prominent breasts. Tut most likely spent the majority of his brief life in excruciating pain.

He Couldn’t Walk Without Help

Tut needed assistance walking due to his severe club foot. Over 100 walking sticks and canes, as well as stools for shooting a bow and arrow, were discovered in Tutankhamun’s tomb. Nobody knew why Tut had been buried with all of these implements until the “virtual autopsy.”

He Wasn’t The Only Child Ruler In History

While Tut became famous as a “boy king” following his discovery, he is far from the only one in history. Ptolemy XIII, a later Egyptian pharaoh, took the throne at the age of 11 or 12 and went to war with Julius Caesar’s Rome over the cult of personality that surrounded his sister Cleopatra. Child monarchs ruled over China, England, and Jerusalem as well.

His Reign Was More Important Than Initially Thought

Tut’s reign as pharaoh lasted only about 8 or 9 years. It was a historically unremarkable period, marked by a few minor military campaigns against Egypt’s nemesis, the Hittites – battles in which Tut almost certainly played no part. Tut did, however, play a role in reviving Amun worship, which had been abandoned by his father in favor of the monotheistic cult of Aten. Tut also relocated Egypt’s capital from Amarna (also known as “Ahkenaten’s City”) to Thebes, and restored many palaces and temples that had been destroyed during previous conflicts.

He Had Two Powerful Advisors

Tut needed strong advisors to help him make decisions because he was only nine years old when he ascended to the throne from his father. He was aided by two powerful deputies. One was Horemheb, the Egyptian army’s commander-in-chief, and the other was Grand Vizier Ay, an aging cavalry soldier turned counsel who is thought to have been the true power behind the throne.

Ay succeeded Tut directly after his death, but he reigned as pharaoh for only four years before dying and being succeeded by Horemheb, who subsequently erased Akhenaten, Tut, and Ay from the historical record.

He Married At Nine Years Old

Tut married his half-sister, Ankhesenamun (“One who lives through Amun”), shortly after ascending to the throne. Little is known about her, except that she was probably a few years older than Tut and, like Tut, was a child of the previous pharaoh Akhenaten – and was possibly married to him. Her mother was most likely the famous queen Nefertiti, who was also possibly Tut’s mother. Tut’s wife was essentially his half-sister, possibly his blood sister, and possibly even his stepmother.

They Had Two Children Who Both Died At Birth

Tut’s tomb revealed two small coffins containing the mummified remains of two babies, daughters who were almost certainly twins. DNA testing confirmed that they were Tutankhamun and Ankhesenamun’s daughters. One of the kids was discovered to have a severe spinal defect, and neither of them appeared to have been born alive.

There are numerous theories as to why Tutankhamun died so young. The culprits range from murder (usually thought to be a blow to the head) to genetic abnormalities to sickle-cell disease. Tut, however, died of a malarial infection contracted after breaking his leg, according to a 2010 study. Ailments passed down through generations are likely to have weakened the young king’s immune system, making him vulnerable to malaria.

But He Might Have Died In A Chariot Accident

Tut’s broken bones led a number of experts to believe that he was crushed in a chariot accident. However, a 2014 “virtual autopsy” concluded that this is extremely unlikely, because many of the bone breaks occurred after he died, most likely during the embalming process or in the early stages of his excavation. Tut would also have been unable to enter a chariot due to his physical deformities.

Tut’s Successors Purged Him From History

Ay carried on Tut’s reforms, returning the country to Amun worship and rejecting the cult of Aten that Akhenaten had favored. When Horemheb ascended to the throne from Ay, he went a step further and began eradicating references to Aten, Akhenaten, Tut, and Ay from history and architecture. Monuments and temples honoring Aten or kings in his line were demolished, and the capital was relocated from Thebes to Memphis. Tut was soon forgotten, and his burial site was demolished.