HomeHistoryWhat Happened To The People In Famous Photographs?
History

What Happened To The People In Famous Photographs? 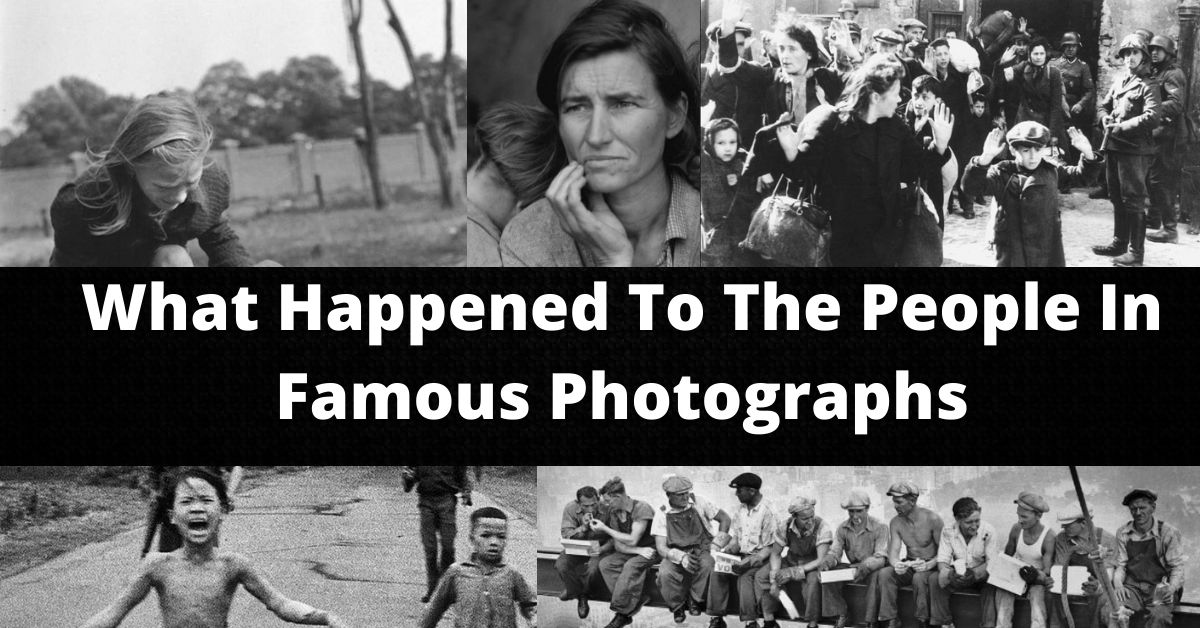 Discover the stories behind some of the world’s most famous photographs. You might be wondering who these people are. And after the shot was taken, what happened to them? Here are the stories of the people who appeared in some of history’s most iconic images, and where their lives went them after the shutter was pressed.

On June 8, 1972, Vietnamese American photographer Nick Ut took the infamous photograph of Vietnamese children fleeing the village of Trang Bang, which had just been napalmed by a South Vietnamese plane. In the center of the image, an unclothed girl walks forward, her arms outstretched, crying in pain.

Kim Phuc, who was nine years old at the time of the attack, survived but suffered from chronic pain as a result of her burns. She had 17 operations over the next few years. After obtaining political asylum in Canada, she eventually settled in Toronto.

Kim was filled with resentment about her fate as a teen. “It built me up with hatred, bitterness, and anger,” she recalled. “I’m just trying to figure out why it’s me. Why did that happen to me? In 1982, I suffered depression because I believed that after I died, there would be no more suffering or pain.”

Kim soon converted to Christianity and found solace in the teachings of the New Testament. “I forgive everyone who caused my pain, including the pilot, commander, and people in charge of me,” she said. In the years since, she has had a son and established a charitable foundation to assist children affected by conflict.

The Polish girl who was mourning her sister lived until 2020 and never forgiven the Luftwaffe.

One of WWII’s most famous photographs was taken only two weeks after the conflict began. It shows a young girl, Kazimiera Mika (neé Kostewicz), kneeling in fear and panic over the body of her sister Anna, who has been strafed by a Luftwaffe fighter pilot.

Photographer and filmmaker Julien Bryan took the picture, which is actually a still frame from a movie. He had been documenting life in Poland and the Third Reich since the mid-1930s. When the war broke out, he fled to Warsaw, where he continued his work as Poland fell under German control. He edited some footage into a short documentary that aired in the United States in 1940.

Mika was able to survive the conflict. Bryan visited Warsaw in 1958 and 1974, shortly before his death, and she kept in touch with him. Sam, Bryan’s son, visited her in 2019 and continued the relationship. “I cannot forgive them, even after all these years,” she said of the Luftwaffe pilots. Mika died on August 28, 2020, at the age of 93, nearly 81 years after her sister.

It’s an image of the Holocaust that will live on in people’s minds forever: It looks like a young boy is holding his hands up, with a look of fear on his face. A German soldier stands nearby, holding a rifle casually in his hands.

Taken in April and May of 1943, when the Warsaw Ghetto was cleared out by German troops as a response to the Warsaw Ghetto Uprising, this picture shows a group of people who were thrown out of the Ghetto. Many people were killed and the rest were sent to concentration camps by the Germans as retaliation for what they had done to the Jews. The photograph is one of many in an album that accompanied a report to SS Gen. Jürgen Stroop’s superiors. A caption in the album reads, “There is no longer a Jewish neighborhood in Warsaw.”

There is no way to know who the boy is or how old he was. It’s thought that he was under 10 years old, because that’s the age when Jewish kids didn’t have to wear a Star of David on their clothes.

The man has been identified as Josef Blösche, a member of the SS who was known for being cruel. In May 1945, he gave up to the Soviets. After being a POW and working in a labor camp, he moved to East Germany. Blösche was arrested by East German police in the 1960s after the Stroop Report came out. On July 29, 1969, he was put to death for war crimes and was killed.

Man with the flask on a skyscraper beam went home to Slovakia and died in WWII.

The famous 1932 photograph of construction workers taking a lunch break atop a steel beam hundreds of feet in the air, as some have assumed, does not depict the Empire State Building under construction. The workers are on the 69th floor of Rockefeller Center’s unfinished RCA Center (now colloquially known as 30 Rock). In addition, the photo was staged in order to generate publicity for the construction project.

It took a lot of detective work to figure out who the men in the photos were. Gustav Popovic, the man on the far right, was a Slovakian immigrant whose wife Mariska stayed in Slovakia while he came to the US to work.

Gusti returned to Slovakia from America before WWII. He used his earnings to buy forests and fields so he could farm. He died during the bombing when the war ended and the front crossed Slavkov. He emerged from the cellar and was killed by a grenade as he walked to the house.

The ‘Migrant Mother’ was identified in the 1970s and complained that she couldn’t ‘get a penny’ from the photo.

When Dorothea Lange took this picture of a migrant woman and her two young children in 1936, she was working for the federal government’s Resettlement Administration. She was documenting migrant farmworkers.

Her face creased by premature lines, the woman appeared much older than her years; the photograph became one of the Great Depression’s indelible images.

For decades, the identity of the “migrant mother” remained unknown until the woman herself wrote a letter to The Modesto Bee in 1978. Florence Owens Thompson was her name. Thompson, a full-blooded Cherokee, had supported her six children by picking cotton after her husband died. By the time Lange photographed her, she had two more children with another man. After WWII, she married George Thompson, a hospital administrator, and settled in Modesto, California.

Thompson’s letter was featured in an Associated Press article titled “Woman Fighting Mad Over Famous Depression Photo.” Thompson complained in the story, “I’m sorry she took my picture. I’m not getting anything out of it. She didn’t even ask for my name. She stated that she would not sell the photographs. She promised to send me a copy. She was never able to.”

When Thompson, 79, was diagnosed with cancer in 1983, her son Troy Owens told her story to the San Jose Mercury News. When the public became aware of her plight, donations totaling $35,000 poured in to assist her with medical expenses.