HomeGeneralWhen a Captive Shark Vomited Up a Human Arm, It Resulted in...
General

When a Captive Shark Vomited Up a Human Arm, It Resulted in a Murder Investigation 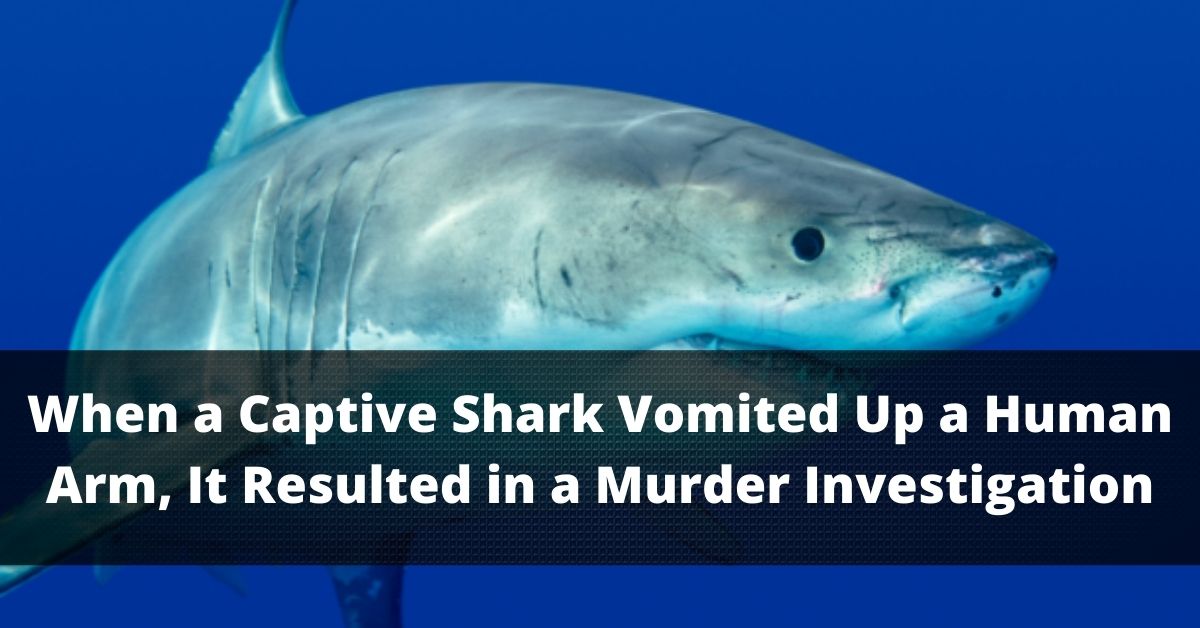 At the Coogee Aquarium in Sydney, Australia, a 14-foot tiger shark was acting oddly. It had lost the enthusiasm and appetite it had showed when it originally arrived at the facility on April 17, 1935, a week before. It was sluggishly swimming around its 25-by-15-foot pool, knocking into the walls and falling to the tank’s floor, where it swam as if it were weighed down by something.

It soon became clear what that something was: The shark thrashed its body and coughed up the contents of its stomach in a quick burst of action. The swarm of aquarium visitors noticed a partially digested human arm floating on the pool’s surface after the froth had cleared.

In 1935, Australians didn’t need an excuse to blame a shark for a tragedy. The southeast coast had been ravaged by shark attacks that year, and the enormous fish were mistaken for man-eaters. When the dismembered arm was regurgitated by the aquarium dweller, many feared it was evidence of yet another terrible shark encounter.

As more facts emerged, the situation got increasingly unsettling—and bizarre. The arm had not been bitten off, but had been cleanly hacked off with a knife, according to the coroner’s report. That meant the shark who spat up the bones was a bystander in what appeared to be a murder. The only witness police had was unable to share its narrative, but they didn’t need the shark’s testimony to proceed; fingerprints and a boxing tattoo on the severed arm gave them a chance to solve one of Australia’s strangest murder mysteries.

After the summer of 1935, Sydney locals feared seeing sharks on the beach, but they were keen to see one in captivity. While fishing with his son Ron off Sydney’s Coogee Beach in mid-April of that year, Coogee Aquarium owner Bert Hobson foresaw the public’s demand. He snagged a 14-foot, 1-ton tiger shark in his fishing line while reeling in a tiny shark, and after bringing the behemoth to shore, he decided to make it the star of his Sydney attraction.

The new exhibit was exactly what the Coogee Aquarium required. Foot traffic in the region had decreased following the demolition of the nearby Coogee Pier, which had contained a penny arcade and a 1400-seat theater. People now had an exciting incentive to throng to the aquarium when a terrifying tiger shark was on show.

The creature’s popularity soared on Anzac Day. The holiday is identical to Memorial Day in the United States, and it is honored on April 25 in Australia and New Zealand. Many individuals went to the Coogee Aquarium on their day off and made a beeline for the tiger shark tank. It would have been cathartic to see a shark up close in a safe atmosphere after reading articles about shark attacks all summer. The captured beast served as a reminder of humanity’s dominance over the waters… until it vomited forth a chunk of human flesh.

That day, The Sydney Herald proofreader Narcisse Leo Young was present. “I was three or four meters away from the shark and definitely saw a copious brown froth coming out of its mouth that smelled absolutely horrible,” he said. The shark also ejected a bird, a rodent, and a “load of filth” in addition to the arm.

Any claims that the sick shark was a maneater were proven to be false, according to the coroner’s report. But it didn’t imply there wasn’t something to be concerned about; a killer was still on the run. Law enforcement officials needed to identify the victim before they could track down the culprit.

Edwin Smith was reading about the events at the Coogee Aquarium when he came across a detail that caught his attention: a description of a distinguishing tattoo branding the arm recovered from the tiger shark pool. It represented two boxers facing each other, fists set for a fight, on the victim’s forearm.

Smith immediately remembered his brother James, who had the same design tattooed in the same location—and had been missing for several weeks.

The news that Jim Smith had been slain and eaten by a shark was upsetting, but not entirely improbable. The 45-year-old Gladesville, Australia, resident was the manager of a local billiards saloon and had a criminal and police informant past. Following a failed boxing career, he performed odd jobs in the Sydney region, including running a billiards saloon and working for Reginald Holmes, a boat-building mogul and crime boss.

Holmes utilized his lucrative boating business as a front for a number of illicit activities. He transported drugs from ships passing through Sydney Harbor to sell in the city with his speedboats. He was also notorious for counterfeiting and insurance scams, which Smith was enlisted to assist with. Patrick Brady, an ex-convict, was also implicated in these operations.

The demolition of an over-insured yacht was one of Holmes’ most infamous scam jobs. Holmes filed a claim for damages after secretly persuading Smith to sink the Pathfinder. He later discovered that Smith had reported the event to the police as “strange,” and he ended himself footing the bill for the boat. This caused a rift between the two men, which was made worse when Smith allegedly began blackmailing Holmes.

On the night of April 7, Smith was last seen drinking and playing cards with Patrick Brady at the Cecil Hotel in Cronulla. They moved to a cottage Brady was renting on Tallombi Street as the night proceeded. Brady was no longer with him when he took a cab from his cottage to Holmes’s house, looking unkempt.

The shark’s tattooed arm shed light on the enigma surrounding Jim Smith’s disappearance. Edwin gave the cops a clue that linked the tattoo on the limb to his missing sibling. Officers had the victim’s fingerprints as well, and they were able to link the hand to Smith using a new forensic technique. The man had certainly been a victim of foul play, and the police had already narrowed down their list of candidates.

GETTING TO THE BOTTOM OF THE STORY

The investigation was far from over, even with two suspects, a motive, and a severed arm. In the case of Smith’s disappearance, police still lacked the concrete proof needed to make arrests. Brady was instead arrested on forgery charges unrelated to the crime. Reginald Holmes was the mastermind behind the operation, and it took the officers six hours of torturous interrogation to persuade him to confess what they already knew.

Holmes must have known the cops were after him since he was on a speedboat in the middle of Sydney’s harbor by the time they arrived at his house. He eluded his assailants while consuming a bottle of bourbon he had snatched before escaping. At one point, he stopped the boat and stood in front of a crowd of onlookers, yelling a nonsensical warning: “Jimmy Smith is dead, and there is only one remaining […] If you leave me until tonight, I will finish him.” After that, he shot himself in the head and drowned.

For a brief moment, it appeared that the investigation had reached a stalemate—but Holmes miraculously lived.

He received a nonfatal wound to his forehead from the bullet, but he was able to get himself back onto the boat. The authorities ultimately apprehended Holmes after a thrilling chase, but extracting a confession from him would be just as difficult. He named Brady as Smith’s killer and painted himself as a blackmail victim. Brady acted alone, according to his version, when he killed and dismembered Smith in his Tallombi Street cottage.

He is said to have thrown the majority of the body parts into the sea, but kept the arm as a menace to Holmes. In this version of events, Brady delivered the limb to Holmes’ residence and informed him that if he didn’t give a large payment, he would be next. Holmes claimed to have panicked and thrown the arm into the ocean, where it was gobbled whole by a tiger shark.

Regardless of how true this narrative was; detectives came to the conclusion that the arm was most likely swallowed after being thrown into the water. The chronology made sense because tiger sharks have a slow digestive system, and the limb might have remained in the animal’s stomach for up to 18 days before being sliced up. It’s even possible that the arm was inside the first, smaller shark Bert Hobson captured before the tiger shark ate it, resulting in a particularly unappealing turducken. However, it is still unknown how it got removed from Smith’s body and into the sea in the first place.

On the morning of the inquest, which Holmes was supposed to attend, police discovered him in his car with three bullet holes in his chest. He had most likely hired hitmen to do the job after purchasing a large life insurance policy on himself. If he had died by suicide, the policy would have been null and void, so he used his con artist skills to pull off one last heist for his family.

Patrick Brady lived to see his murder trial, but it wasn’t the straightforward case that prosecutors had hoped for. They suffered because they lacked Holmes’ witness testimony, and the physical evidence they had was less incriminating than it appeared. The defense argued that one arm wasn’t proof of murder, and that it was wrong to convict a man when Smith could have survived. Brady was acquitted and maintained his innocence until his death in 1965, at the age of 76.

The shark arm case claimed the lives of more than just Smith and Holmes. The Coogee Aquarium’s tiger shark was killed and cut open shortly after disgorging the arm. The autopsy was a waste of time because it revealed no additional body parts or answers to the strange incident’s questions.

Though much has been learned since that fateful day at the Coogee Aquarium in 1935, we will almost certainly never know the full story of what happened the night Jim Smith vanished. And, even if new evidence emerges in the case, the chances are slim that it will overshadow the story’s dramatic, sloppy beginnings in the public’s consciousness.