HomeGeneralWho destroyed the noses of many ancient statues?
General

Who destroyed the noses of many ancient statues? 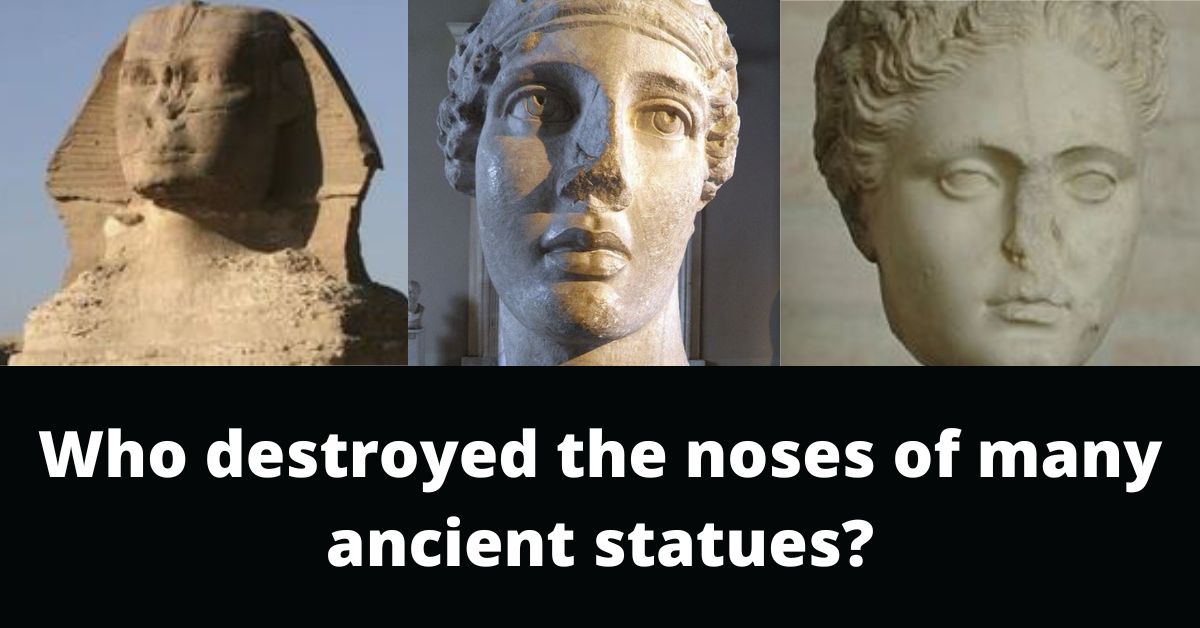 Many people have pondered this issue: “Who destroyed the noses of many ancient statues?”. Ancient sculptures like this poetess Sappho of Smyrna (Izmir, Turkey), which is now in the Istanbul Archaeology Museum with a broken nose, are very common.

It is common in historical art from all cultures and time periods to have noses that have been broken or are missing. This is not limited to sculptures from certain civilizations or epochs, though. On Egypt’s Giza Plateau, next to the great pyramids, the Great Sphinx’s snout is notoriously missing.

In the unlikely event that you come across one of these statues, you will most likely question, “Where is the nose?”. It appears that some people are under the mistaken assumption that the noses on the bulk of these sculptures were removed by someone on purpose.

However, it is true that some ancient sculptures were deliberately destroyed by humans at different times and for different motives. For example, a marble head of Aphrodite from the Agora of Athens was uncovered. Because of the cross carved into the goddess’s forehead, one can tell that the marble head was damaged on purpose by Christians. A second example is the demolition of the two gigantic Buddhas of Bamiyan in central Afghanistan, Salsal and Shahmama, which were carved into the side of the cliff. The statues were demolished in March 2001 on instructions from Mullah Mohammed Omar, the commander of the Taliban, after the government proclaimed them idols.

It’s important to note that these two examples are outliers and do not represent the vast majority of ancient sculptures that were created without a nasal bridge. For the majority of the rest of the ancient sculptures that lack noses, the absence of a nose has nothing to do with human beings. To put it another way, the sculpture’s lack of a nose is purely the result of normal wear and tear over time.

Ancient sculptures are thousands of years old, and as a result, they’ve all been subjected to a great deal of natural degradation. Today’s museum sculptures are virtually always tarnished and weathered as a result of use and the elements. Appendages, like noses, limbs, and heads, are frequently the first portions of sculptures to fall off. Legs and torsos, for example, are more likely to survive if they are firmly linked.

This ancient Greek statue, which you can see here, is undoubtedly well-known to you. The artist, Alexandros of Antioch, drew inspiration from the island of Melos in the Mediterranean and developed it into a new art form. Aphrodite of Melos, or Venus de Milo, is the name given to it. It is known for its lack of arms.

The Aphrodite of Melos did have arms once upon a time, but they fell off like so many other body parts, including arms, noses, and legs. Many other sculptures’ noses have suffered the same fate. As a result of the noses’ prominence, they are more prone to breaking.

Archaeologists can use ultraviolet light to look for pigment remnants even in sculptures that have lost their original hue. Ancient Greek literature is littered with allusions to painted statues, like in Euripides’ Helen, where Helen wails as “In part because of Hera, and in part because of my beauty, my life and fortunes have turned out to be a monstrosity. I wish I could lose my beauty and take on a more unkempt appearance. In the same way that you’d remove paint from a statue by wiping it clean.”

This is an abstract of the original post by Spencer McDaniel, updated with more information.